Since the weekend, two polls have been released indicating that the margin between Wildrose and the Progressive Conservatives has shrunk to seven points in Alberta's provincial voting intentions. That means that, though Wildrose is still on track to win a majority government, the race has tightened up. 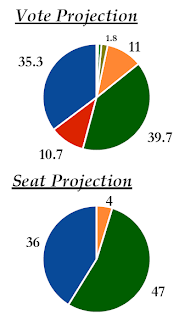 Since Apr. 13, the projection that incorporated all pre-debate polling, Wildrose has dropped 2.2 points and now sits at a projected 39.7% of the vote. The Tories have picked up 2.1 points and are now at 35.3%, their highest level of support since Mar. 29.

This reduces the gap between the two parties to 4.4 points. That is certainly less than the seven points forecast by the two recent polls, so now is a good time to remind readers that the vote projection model includes an adjustment that increases or decreases projected vote share. This adjustment is based on where a party sits in the legislature, and so indirectly incorporates a whole slew of intangibles: organization, enthusiasm, fundraising, and incumbency. Past federal and provincial elections have indicated that there is some relationship between polls over- or under-estimating a party's support and the position of that party in the legislature at dissolution: bigger parties tend to be under-estimated, smaller parties are over-estimated.

This tightening of the race means that the Tories have picked up nine seats in the projection since the debate, all at the expense of Wildrose. Danielle Smith's party is now projected to win 47 seats against 36 for the PCs and four for the NDP (unchanged).

The two new polls disagree with one another strongly at the regional level, but less so province-wide. The result is that Wildrose is projected to take between 36.7% and 42.7% of the vote, compared to a range of 31.8% to 38.8% for the PCs. The two parties overlap one another once again.

Though the likely seat ranges for the Liberals and NDP remain unchanged, the Wildrose range has stretched downwards. They are projected to win between 27 and 74 seats, while the Progressive Conservatives can win between nine and 58 seats. This gives both parties the chance of forming a majority government, though the votes would have to swing heavily in the PCs' favour for them to win it.

The biggest shift in support has taken place in Calgary, where Wildrose dropped 3.3 points and seven seats to 44.5% and 19 seats. The Tories picked up 4.3 points (thus, it would appear, stealing votes from the left as well as the right), and is now projected to take 34.8% of the vote in the city, as well as eight seats.

But with the recent polls disagreeing on who leads in the provincial capital, the ranges for the Tories and Wildrose now overlap: 32% to 46% for the PCs and 19.1% to 33.7% for Wildrose. This means between eight and 26 seats for the Tories and between one and 18 seats for Wildrose. The NDP, meanwhile, could win as much as 19.9% of the vote and seven seats, while the Liberals could take 18.2% of the vote and three seats.

The Return on Insight poll done for the CBC puts Wildrose at 43% to 36% for the Tories, with the Liberals at 11% and the NDP at 9%. It is impossible to really look at trends with this survey, however, as RoI was last in the field at the end of January. But contrary to virtually every single poll out in this campaign, RoI puts the Tories ahead in Calgary and Wildrose ahead in Edmonton.

Forum is a little more conventional, but also shows that seven point gap. They have Wildrose at 40%, down three points since Apr. 9, and the Tories at 33%, up two points. The NDP is up one to 12% and the Liberals are unchanged at 10%. Like other polls, they show the comfortable Wildrose and Tory leads in Calgary and Edmonton, respectively.

While it is difficult to figure out what is going on in the two main cities (though it is safe to say that Forum is probably closer to the mark), it does appear that the margin between the two parties is closing. Will it close fast enough for the Tories? The next few days will tell us - and as the headlines aren't exactly positive for Wildrose at the moment, things could move quickly.
Posted by Éric at 4:37:00 PM