Voters in Argenteuil and LaFontaine go to the polls today in two Quebec by-elections that will serve as an important test for virtually every political party in the province. While LaFontaine is a foregone conclusion, Argenteuil could be very close.

Also, check out my latest article for The Globe and Mail on the political situation in Ontario. It is a close three-way race, but the Progressive Conservatives have the edge in provincial polling.

With the two by-elections in Quebec serving as the potential first act in in the province's political theatre that could culminate with a general election in September, ThreeHundredEight launches its Quebec provincial election coverage with a poll aggregator, accessible by clicking on the image in the right-hand column showing the current averages of the three leaders in Quebec: the Liberals, the Parti Québécois, and the Coalition Avenir Québec. This aggregator will be updated regularly as new polls are released, and breaks the province down into six regions: Montreal, suburban Montreal, Quebec City, and eastern, central, and western Quebec. The aggregator also tracks the voting intentions of francophones and non-francophones.

This is not ThreeHundredEight's projection. That will be launched later this summer.

The site has also been tracking the upcoming by-elections at the By-Election Barometer. Of the scheduled and potential by-elections being tracked, Argenteuil is forecast to be the closest. 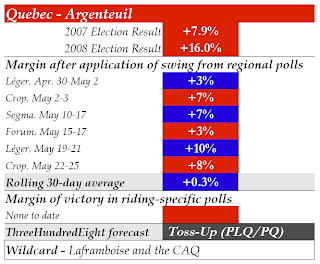 Though Argenteuil would appear to be a Liberal fortress, it isn't as cut-and-dry as that. The Liberals did win by a wide margin in 2008 (16 points), but the election in 2007 was much closer and it was the ADQ that finished second. With David Whissell no longer on the ballot, and politics in Quebec a jumbled mess, the results should be interesting.

The Liberals have the inside track. Along with the incumbency advantage, a swing based on regional poll results put the Liberals ahead in three of the last six polls, including the most recent by CROP. Winning the riding would not be a coup for Jean Charest, but if Lise Proulx wins by a respectable margin it will be a strong indication that the Liberals have plenty of life left in them yet. However, if the race is very close or if the Liberals lose, it would not bode well for the party. ThreeHundredEight's forecast puts them at between 30% and 40% support, but anything better than a two-point margin would be a moral victory for the Liberals.

The Parti Québécois has a good chance of a strong performance in Argenteuil, a riding they have come close to winning before. The regional swing puts them ahead in three of the last six polls, and an average of the six polls gives the PQ a 0.3% edge. That is too small to mean anything, and with the intrinsic advantages the Liberals hold in the riding the PQ is the underdog. Roland Richer is forecast to take between 24% and 39% of the vote, but anything above the 34% they took in 2008 will be touted as a moral victory. The PQ is unlikely to win the riding, and would need to be within two points of the Liberals to truly take something positive from the result, but I consider that less than likely.

Why? Because the Coalition Avenir Québec is running Mario Laframboise, the former Bloc Québécois MP for the region. Of course, Laframboise was defeated quite handily by the NDP in 2011 but he did win a few of the polls around Lachute, which is part of the smaller Argenteuil riding. He could pull in a lot of votes due to his name recognition alone, and with the high-watermark of the ADQ being 30% in 2007, he certainly has the capacity to pull out a good performance. The forecast puts him only between 11% and 16%, but I suspect he could do a lot better. This will be a big test for the CAQ in its first electoral outing. Anything below 25% will be tough to swallow for François Legault. A win would be tremendous for his party.

Other parties are facing a test as well. Québec Solidaire has been up in the polls and turned that into a respectable showing in the Bonaventure by-election late last year. QS has not done much better than 2% in the riding, however, so they are almost certainly going to have a best-ever result. The forecast puts them between 4% and 8%, and where Yvan Zanetti ends up on that scale could mean the difference between a strong PQ result and a weak one.

Option Nationale is also facing its first electoral test, and it will be interesting to see how much of the vote they manage to take. The Équipe Autonomiste and the Conservative Party of Quebec, two formations which emerged after the ADQ was swallowed by the CAQ, could eat into Laframboise's vote somewhat, though it is unlikely they will capture more than a hundred votes apiece. Claude Sabourin, leader of the Green Party, is a candidate in Argenteuil as well. This is his riding - he has run here in the last three general elections - but he has never done better than 4.7%. That might be a difficult number to beat this time around.

Argenteuil is a toss-up riding which could go to the Liberals or the PQ. The Liberals are favoured, but the candidature of Laframboise for the CAQ is a wildcard in this by-election. 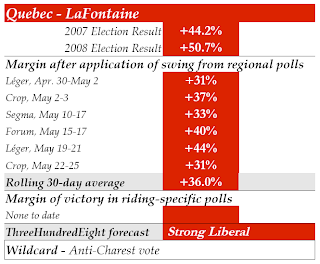 There is very little suspense in LaFontaine. It is a solidly Liberal riding, won by a margin of 44 points in 2007 and 51 points in 2008. Though the problems that Tony Tomassi faced may have tainted the Liberal brand somewhat, the Liberals should still easily win this riding. The average swing from the last six polls gives the party a 36-point edge.

But there are still a few things to watch tonight. Will the Liberal vote turnout in strong enough numbers to give Marc Tanguay, a parachute candidate, this sort of landslide? Will the anti-Liberal vote coalesce around one party? The riding has a large Italian community, and neither the Liberals nor the PQ are running Italian-Canadian candidates.

The Liberals are forecast to take between 43% and 57% of the vote. If the party does not take a majority of ballots cast, it will cast a bit of a shadow over their win. It would be shocking if the Liberals lost LaFontaine, and would likely throw Charest's September election schedule out the window.

The fight is really between the Parti Québécois and the Coalition Avenir Québec for second place. The PQ managed 19% in 2008, while the ADQ took 18% in 2007, giving both the PQ and the CAQ a good shot. The forecast puts the PQ between 13% and 17% support while the CAQ scores between 10% and 13%, but I expect the CAQ to do slightly better. I would give them the edge on placing second, which will mean little to the PQ but will be a bit of a moral victory for the CAQ.

For the other parties, including the ADQ spin-offs, Québec Solidaire, Option Nationale and the Greens, LaFontaine holds little promise. But it will be interesting to see what kind of numbers they put on the board.

LaFontaine is a Strong Liberal riding and is almost certain to be retained by the Liberals. Losing it is not impossible (nothing is in by-elections), but it would be catastrophic for Jean Charest.

The Liberals should win both of these ridings, a piece of good news that the Premer can ride throughout the summer into a fall election. Losing Argenteuil would be a problem for the Liberals, but if they lose by a narrow margin things can still be salvaged. The CAQ has much more to gain by strong performances tonight than the PQ, as the next election is too close for any rumblings to bother Pauline Marois. François Legault, however, needs some positive press. À voir.
Posted by Éric at 11:14:00 AM