Léger Marketing and Le Devoir released a poll on the voting intentions of Quebecers on Saturday and Monday, indicating that at the provincial level things remain neck-and-neck. But while the Parti Québécois and Liberals are mostly treading water, Jean Charest's leadership and personal numbers were up significantly. That is the sort of thing that can decide a tight race. 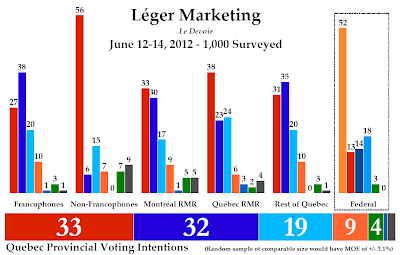 Léger was last in the field May 19-21, and since then the Liberals are up a single point while the PQ has held steady. That gives the Liberals a narrow one-point margin over the Parti Québécois, 33% to 32%. Normally that kind of split can deliver the PQ a majority government, but it is slightly more complicated than that.

The Coalition Avenir Québec has dropped two points to 19%, while Québec Solidaire is down one point to 9%. The Greens and Option Nationale are unchanged at 4% and 1%, respectively.

There are two reasons why the Parti Québécois cannot pull a majority out of a one-point loss like they did in 1998. Firstly, the advantage they hold over francophones is not large enough. They have 38% support (-1) to 27% for the Liberals (+2), while the CAQ eats up 20% (-4) among this election-deciding demographic. Secondly, the PQ has not racked up a huge lead outside of Montreal and Quebec City. In the régions, the PQ holds only a four-point edge over the Liberals, 35% (-6) to 31% (+5). That is a big swing, and while the CAQ played the spoiler in the Argenteuil by-election for the Liberals, with 20% support (+1) they could play the spoiler for the PQ in a lot of other ridings throughout the province.

The gap is widening in Quebec City, on the other hand, where the Liberals are up eight points to 38%. The CAQ has dropped nine to 24% and the PQ is down seven to 23%, giving the Liberals a lock on most of the seats in the provincial capital.

The Quebec provincial poll aggregate does include the numbers from Léger, including a more precise breakdown within the regions of Quebec. Léger gives the PQ a 16-point edge in western Quebec over the Liberals and a 20-point advantage in eastern Quebec. The Liberals, meanwhile, have a 16-point lead in central Quebec over the CAQ. But what is noteworthy are the numbers on and off the island of Montreal. The aggregate (which estimates support when numbers are lacking, as they are for the Montreal region) puts the Liberals well ahead on the island with 40% to the PQ's 24%, while Québec Solidaire is in third at 16%. Off the island, the race is closer: 34% for the PQ, 29% for the Liberals, and 24% for the CAQ.

Léger also released its numbers for the federal scene in Quebec. The New Democrats dominate with 52%, up five points from Léger's last federal poll of Apr. 2-4. The Bloc Québécois has dropped 11 points to only 18%, while the Conservatives are up four to 14% and the Liberals are up three to 13%. 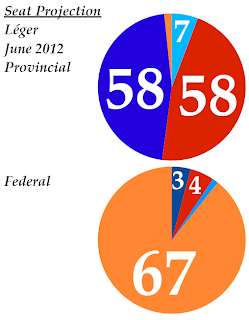 For the NDP, that kind of landslide would deliver 67 of the province's 75 seats to the party, leaving only four for the Liberals, three for the Conservatives, and one seat for the Bloc.

Provincially, however, things are far more murky. These numbers deliver 58 seats apiece to the Parti Québécois and the Liberals. That is quite close to the 63 needed for a majority, suggesting that either party could come out on top with a small majority or a large minority government.

In this scenario, the CAQ's seven seats become extremely important. They can deliver a majority to either the PQ or the Liberals - the question is which. With only two seats, Québec Solidaire would not hold the balance of power.

Further complicating things, the CAQ is involved in 10 ridings where the projected margin is five points or less, the PQ is a factor in 20 of those ridings, and the Liberals are implicated in 23 close races. Assuming the parties win or lose all of these ridings where the margin is five points or less, the CAQ could win between four and 14 seats, the Parti Québécois between 45 and 65 seats, and the Liberals could win anywhere between 48 and 71 seats. That means a whole slew of outcomes (including, potentially, QS holding the balance of power) are more than plausible.

But Jean Charest has the advantage. In addition to his party's advantage, Charest's own personal ratings have improved. He is seen as the best person to be premier by 26% of Quebecers, a gain of eight points since May. Pauline Marois has dropped two points to 21% and François Legault is down four points to 19%. That is a big gap in what has been a race to the bottom for the last year or two.

And while Charest is still widely disliked (61% have a bad opinion of him), the number of people who said they have a good opinion of him increased by seven points since December to 30%. By comparison, Marois splits 34% to 53% and Amir Khadir, one of the two leaders of QS, splits 24% to 56% (a big drop since December). Legault still has the best numbers, at 47% good to 30% bad, but Mario Dumont also always had better personal approval ratings than his competitors. That worked for him in 2007, but only in 2007.

The election is rumoured for September, and 55% of Quebecers like that idea (that sounds eerily close to a likely turnout rate). The Liberals have already put out a television ad reminiscent of Dalton McGuinty's plain-speaking ad from their 2011 campaign, while the PQ is putting together one of their own. The campaign may not officially start until mid-August, but it already seems like we're in the thick of it. With the numbers where they are, it could go down to the wire.
Posted by Éric at 9:36:00 AM