Environics released their latest numbers from Ontario, indicating that the Progressive Conservatives hold a wide-lead over the second-place New Democrats. But with the Liberals dropping so much, they risk being reduced to their enclave of Toronto. 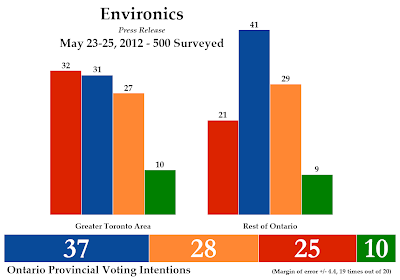 Environics was last in the field Apr. 10-13, and since then the PCs have remained steady at 37% support.

The only party gaining, then, is the Green Party, up four points to 10%.

Perhaps this is a statistical fluke or a rejection of the Liberal government and its NDP support. But there is little to suggest why the Greens would be making such important gains (they had less than 3% support in the last election).

The race is a tight three-way contest in the GTA, where the Liberals have dropped five points to 32% support. The PCs are down three points to 31%, while the NDP is up three points to 27%. The Greens are up five to 10%.

In the rest of Ontario, the Tories are up two points to 41% while the NDP is down five points to 29%. The Liberals are up one point to 21% and the Greens are up two to 9%.

Interestingly, Environics included the 2011 election's results in the breakdown of the GTA and the rest of Ontario. Compared to the last vote, the Liberals have dropped 12 points in both regions, while the NDP is up six points in the GTA and five points in the rest of the province. The PCs are mostly holding steady - unchanged in Toronto but up two points elsewhere.

With these numbers, the Progressive Conservatives win a majority government of 61 seats, with the NDP forming the Official Opposition with 30 seats. The Liberals win 15 seats and the Greens win one.

Before anyone gets too excited, note that the Greens have increased their support by more than three times in this poll. That is almost certainly a huge inflation of their real support and especially the support they would get on a hypothetical election day. But at 10%, they do reach the threshold of being able to win a seat.

The PCs win 21 seats in eastern and central Ontario, 22 in Hamilton/Niagara and southwestern Ontario, 16 in Toronto and the surrounding area, and two in northern Ontario.

The NDP wins one seat in eastern Ontario, 11 in and around Toronto, nine in Hamilton/Niagara and southwestern Ontario, and nine in the northern part of the province.

The Liberals win two seats in eastern and central Ontario and 13 in and around Toronto.

The results of this poll are quite horrific for the Liberals. It would appear that the party has never scored 25% support since at least before 2003. They have been between 26% and 28% several times, but not even in the dog days of mid-2011 did Dalton McGuinty's party sink so low.

However, Ontario has been a bit of a confusing province lately. Polls have disagreed with one another wildly, so it is quite possible we will see another poll in the coming days putting the Liberals in second place. After all, this survey had a rather large margin of error of +/- 4.4%, and with Nanos also usually polling around 500 people the level of disparity between the polls is perhaps not so surprising.

Nevertheless, the Liberals have had a run of bad polls. It is a good thing for them that they will not be facing the electorate this year, though Dalton McGuinty has come back from this kind of deficit before.
Posted by Éric at 9:00:00 AM