A provincial by-election is taking place today in New Brunswick in the riding of Rothesay, just outside of Saint John. Though it is a strong riding for the governing Progressive Conservatives, the New Democrats are taking a run at it by nominating Dominic Cardy, leader of the party, as their candidate. The by-election marks the first electoral test for the NDP as the leading national political brand.

Of course, provincial and federal politics are very different beasts. While the provincial New Democrats took only 10% of the vote in the 2010 election in New Brunswick, the federal NDP captured 30% in the province in the 2011 federal election. Nevertheless, the provincial and federal brands of the NDP are more closely linked than either their Conservative or Liberal rivals - and it is hard to separate the recent surge in NDP support that has been registered in Atlantic Canada at both levels of government.

But Rothesay could be a very difficult nut to crack. It has been held by the Progressive Conservatives since 1999, and they have not taken less than 48 per cent of the vote in their four consecutive victories. However, all of those victories were won by Margaret-Ann Blaney, who has left to take a post in the public service.

Hugh John (Ted) Flemming III has somehow fit his name on the lawn signs for the PCs, while John Wilcox is running for the Liberals and Sharon Murphy for the Greens.

ThreeHundredEight forecasts Rothesay to be a strong PC riding, giving them a very high probability of coming out on top tonight. But with the presence of Cardy on the ballot, this makes the riding much more unpredictable than the recent by-elections in Quebec. 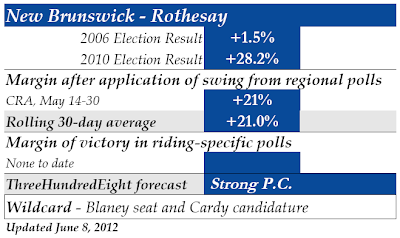 Polls are quite rare in New Brunswick, but Corporate Research Associates puts out quarterly numbers. They have shown very little change in voting intentions over the last year.

Since August 2011, the Progressive Conservatives have been solidly between 41% and 45%, while the Liberals have stood between 28% and 34%. The New Democrats, at between 19% and 23%, are well behind in third place. All of these variations are well within the margin of error.

The swing from CRA's last poll suggests that the Tories should still be able to win the riding by a margin of 21 points, even with Cardy on the ballot. But he has the potential to shake things up considerably, just as Kevin Lamoureux was able to take the federal Liberals from also-ran to winner in 2010's by-election in Winnipeg North.

The Progressive Conservatives are still likely to win the riding. They have history of winning, taking 57% of the vote in 2010. But there are several factors which put the riding at risk. Blaney was awarded a plum post in the provincial civil service, highlighting the issue of patronage. That could hurt the Tories significantly. Also, the last time they lost the riding was in 1995 when Blaney was not on the ballot. Since 1999, has Rothesay been a PC stronghold or a Blaney stronghold? The forecast gives the Progressive Conservatives between 52% and 53% of the vote, though I suspect they could be easily whittled down below that mark. But the Tories are still doing well in the provincial polls and Premier David Alward is relatively popular, so they are still the favourite to win. The next provincial election is far away, so a win will be a win for the Tories.

The Liberals are in a much more difficult position. They have been competitive in this riding before, winning it in 1995 and taking 47% of the vote in 2006. But that fell to 28% in 2010, and with the party leaderless they do not have the wind in their sails. They have nevertheless held relatively steady in the polls, suggesting that they are holding on to their vote from the 2010 election, but there is little reason to believe that the voters of Rothesay will be looking to Wilcox as the best alternative to the PCs. The forecast puts them between 23% and 27% of the vote. If anti-PC voters flock to Cardy and the NDP, they could take significantly less support than this. But without a leader, they have a ready-made excuse for a bad performance. There is little at stake for them in Rothesay.

Not so for the New Democrats. With Dominic Cardy on the ballot, the NDP is taking a big risk - but it is a necessary risk. The NDP hasn't held a seat in the legislature since 2005 and desperately need to back-up their decent polling numbers. Support for the party is double what it was on election day and they need something concrete to solidify these numbers. Rothesay is not a particularly good riding for the party, as they only took 9% of the vote in 2010. With the exception of their poor showing in 2006, that is generally where they party has been in Rothesay: they captured 12% in 1995 and 2003 and 10% in 1999. So while they do have a decent base from which to work, they need to eat into the Liberal vote as well as the PC vote in order to come out on top. It is a tall order, and the forecast only gives them between 15% and 19% of the vote. However, I think Cardy will do considerably better. If the NDP can manage to place second with over 30% of the vote, I would consider that a moral victory. If they can actually win the riding, it would be spectacular for the party.

With less than 10,000 voters in the riding, even a small amount of swing can drastically change things. If 5,000 turn out to vote, which would be a decent showing for a by-election, only 500 votes going from the Liberals to the NDP would be enough to put the New Democrats in second place. It will take a lot more than that, however, for Cardy to defeat Flemming. But with the NDP making gains at the provincial level and leading federally, it is far from implausible.
Posted by Éric at 10:47:00 AM