The provincial by-elections in Argenteuil and LaFontaine last night held a few surprises, though no party did much better or worse than expectations. With a win in Argenteuil and a second-place showing in LaFontaine, Pauline Marois and the Parti Québécois came out the big winners in last night's vote - thanks to François Legault and the Coalition Avenir Québec. 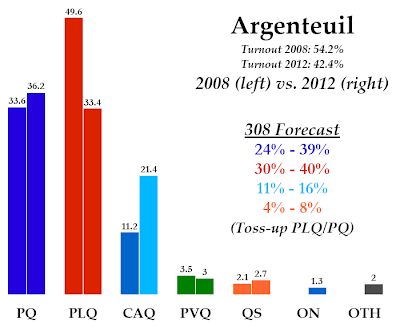 As expected, Argenteuil was the more interesting contest of the two as the Liberals and PQ battled it out for top spot, each party leading in the vote count at various times during the night. Turnout was about average for a by-election at 42.4%, down from the 54.2% of the 2008 general election.

Where did those votes go? Mario Laframboise finished a respectable third for the CAQ with 21.4%, up from the ADQ's 11.2% of 2008. He took 1,430 more votes than the ADQ did in that election, much of that support apparently coming from the Liberals. It wasn't enough to give the CAQ some positive press, but it did help wrest away the riding from the Liberals.

Claude Sabourin, leader of the Greens, finished third with 3% of the vote, down 217 ballots and 0.5 percentage points from 2008. Québec Solidaire did not have a very strong showing, increasing their share to 2.7% from 2.1% and capturing 34 new votes.

In its first electoral outing, Option Nationale captured 1.3% of the vote. An independent candidate took 0.8% and Équipe Autonomiste, an ADQ spin-off, took 0.1%.

Interestingly, the new Conservative Party of Quebec captured 1.1% of the vote in the riding. At 190 ballots that isn't much, but they almost took as much of the vote as ON, which garners a lot more press thanks to the party's leader, Jean-Martin Aussant, being an MNA.

ThreeHundredEight forecast the riding to be a PLQ/PQ toss-up, and in the end the forecast was correct. Both the Liberals and PQ ended up within their forecasted range, though I personally expected a stronger showing for the Liberals than what occurred. The Parti Québécois did quite well but it was the growth for the CAQ that did the Liberals in here. The forecast for the CAQ was low, as expected, but Laframboise still under-performed, as did Québec Solidaire.

The 30-day rolling average of swings from regional polls gave the PQ the edge by 0.3 points, and in the end the party won by 2.8 points over the Liberals. 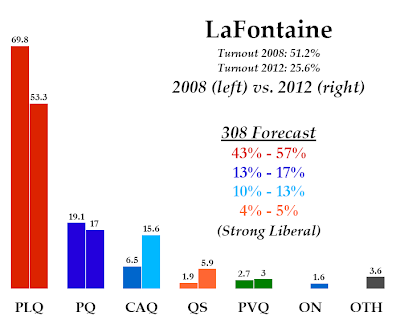 The by-election in LaFontaine was easily won by Marc Tanguay, the newly minted Liberal MNA. Turnout was terrible, however, falling from 51.2% in the general election to only 25.6%. Accordingly, the Liberals won the riding with 53.3% of ballots cast, but with the support of only 13.6% of electors in the riding.

Québec Solidaire saw a big boost, from 1.9% to 5.9% and up 220 votes, indicating that their strong poll numbers on the island of Montreal are no fluke. The Greens increased their share by 0.3 points but dropped 241 votes, while Option Nationale took 1.6% of the vote.

But again, the Conservatives challenged ON for sixth spot with 1.3%. Their presence, along with EA, might have cost the CAQ the runner-up status: with their votes, Legault's party would have taken 17.3%.

This riding was forecast as a Strong Liberal riding, with the 30-day rolling average putting the margin at 36 points. The Liberals ended up winning it by a margin of 36.3 percentage points. The forecast was good for the Liberals (43% to 57%) and the PQ (13% to 17%), while a little low for the CAQ (as expected) and Québec Solidaire. All in all, the By-Election Barometer's first experience was a positive one.

Last night, only 40.6% of valid ballots cast were marked with an X next to the Liberal candidate's name, a huge drop. The PQ's tally increased a little to 29.3%, while the CAQ's more than doubled to 19.3%. There are always swaps between all parties, but it would appear that much of the CAQ's vote came from the Liberals.

If we adjust for turnout (Argenteuil and LaFontaine had roughly equal turnout in 2008, but most definitely not last night), we see that the Liberal share dropped 16.3 points to 42.9%. The Parti Québécois's share increased by only 0.3 points to 27%, indicating that the party was merely treading water.

The CAQ picked up 9.6 points on what the ADQ accomplished in 2008, a big swing in their favour. They are a force to be reckoned with and certainly more potent than the ADQ, ca. 2008. But they are not yet in a good position to play anything but the spoiler in a whole swathe of ridings.

For Québec Solidaire, their share increased from 2% in 2008 to 3.9% last night, or 4.2% when adjusting for turnout. Not a bad result, but for a party flirting with double-digits province-wide they should have done better.

Option Nationale confirmed its position as the sixth party with a total share of 1.4% of ballots case last night, but the Conservatives took 1.1% of the vote. For a party that has hardly gotten any notice in the media, that is a pretty surprising performance.

The Parti Québécois came out on top last night, as their win in Argenteuil was contrary to expectations. Though their share of the vote was not impressive, a win is a win. Their second place showing in LaFontaine, despite their loss in vote share, is also a piece of positive news for the party.

The Liberals took a hit by losing Argenteuil, and it definitely casts a small shadow over Jean Charest's summer. But the party kept it close, denying the Parti Québécois a dominant performance and keeping the CAQ far away in third. Their win in LaFontaine with a majority of ballots cast is a strong sign that the party is not in danger of losing their fortresses in Montreal, of which there are many.

Last night was tough for François Legault and the CAQ, however. Though they did improve upon the ADQ's performance in 2008, in neither riding did they outscore Mario Dumont's result from 2007. Capturing second in LaFontaine would have been the silver lining on a bad night, but they just missed out on it. And taking less than 25% of the vote in Argenteuil, the benchmark on which I drew the line between a good and bad result for the CAQ yesterday, has to be disappointing. Laframboise was a decent candidate, and with the CAQ struggling in the polls the number of decent candidates they will be able to nominate could be few and far between.

The CAQ is certainly not in the sorry state that the ADQ found itself in after the 2008 election (when they could barely manage more than 3% in almost any by-election), but they had an opportunity to turn things around last night and set the party on the right course for September. On that score, they failed.
Posted by Éric at 9:42:00 AM