Forum has been furiously polling the good people of Ontario of late, having conducted one federal and two provincial polls since June 4. Their timing, as always, is good - it only became clear yesterday that Ontario would not be headed to a snap election in July. But the happenings in Queen's Park, though they have appeared to have little real effect on voting intentions, have pushed down Andrea Horwath's approval ratings significantly. 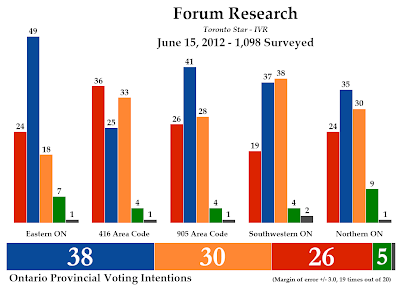 Forum was last in the field on June 4, shortly before talk of a summer election picked up. Since then, the Progressive Conservatives have gained two points and now lead with 38% support, putting them eight points up on the New Democrats, who are unchanged at 30%.

The Liberals, however, are down two points to 26%. The Greens sit at 5% support province-wide in this one-day IVR poll.

Though Environics recently pegged Liberal support as low as 25%, this is the lowest that Forum has registered the Liberals since June 2011. This was when the party was polling well behind the Tories and were on track to be defeated in the October election. It did not quite turn out that way, but the big difference is that in the 2011 poll the New Democrats were at 22%, four points behind the Liberals instead of four points ahead.

The Liberal slip is not contained in any one part of the province, as the party is down everywhere except eastern and northern Ontario, where they are up one and four points, respectively, on small sample sizes.

How Forum defines northern Ontario, however, could be significant. Some firms have that region stretch all the way down to Lake Simcoe, while others cut it off much further north. That area of divergence is the strongest "northern" part of the province for the PCs. I have inquired as to Forum's definitions.

They are a factor in the 416 area code of Toronto, where they still lead with 36% support. But that is down five points since June 4, and with a three point gain the NDP is not far behind at 33%. The Tories are up one to 25%, their weakest result in Ontario.

With these numbers, the Progressive Conservatives manage to win a majority of Ontario's seats. They would win 61, while the New Democrats form the Official Opposition with 30 seats. The Liberals are reduced to only 16 seats in the legislature.

The Tories win 11 seats in eastern Ontario, 10 in central Ontario, 13 in the GTA, three in Toronto, six in Hamilton/Niagara, 16 in southwestern Ontario, and two in northern Ontario.

The New Democrats win one seat in eastern and central Ontario each, two in the GTA, nine in Toronto, four in Hamilton/Niagara, five in southwestern Ontario, and eight in the north.

The Liberals win two seats in eastern Ontario, three in the GTA, 10 in Toronto, and one in northern Ontario.

Note that, with this poll added to the By-Election Barometer, Kitchener-Waterloo is now considered a "Strong PC". Also, federal numbers in the Forum poll have put Etobicoke Centre down a notch to "Lean Liberal".

Part of the reason for the Liberals' struggles in Ontario is Dalton McGuinty, who has an approval rating of only 28%. His disapproval rating stands at 61%. Both of those numbers are virtually unchanged since June 4.

But Tim Hudak does not do much better. With his numbers also holding relatively steady, his approval is worse than McGuinty's at 25%, but his disapproval is lower at 49%. Interestingly, while McGuinty and Horwath score over 70% approval among their own party supporters, Tim Hudak manages only 49% approval among PC voters.

However, McGuinty and Hudak seem to have not been hurt by the last few weeks of grandstanding at Queen's Park. Andrea Horwath, on the other hand, is seeing her sparkling approval ratings slip. Though she still has a net positive score, her approval rating has dropped from 47% to only 39%. Her disapproval rating is up from 26% to 35%. These are significant shifts, particularly in the context of McGuinty and Hudak holding steady. While the New Democrats themselves are unchanged in voting intentions, this whittling down of Horwath's personal numbers evens the playing field somewhat. But it also speaks to how disillusioned Ontarians seem to be with their political leaders.
Posted by Éric at 9:23:00 AM