The results of last night's by-election in Rothesay, a New Brunswick riding north of Saint John, were somewhat surprising. Ted Flemming held on to the riding for the governing Progressive Conservatives by the skin of his teeth, while the Liberals improved their vote share to come a close second and the New Democrats more than doubled their raw vote total from 2010's general election. In sum, everyone has something to be pleased about.

For those of us who were watching the results come in, it was pretty clear throughout the night that Flemming was going to win. But who would place second was not settled until the last 10 ballot boxes or so were opened, as the Liberal John Wilcox and the NDP's Dominic Cardy traded the advantage for much of the night. It was a good performance for Cardy, the NDP's party leader, but he fell just short of the 30% and second-place finish that I said would be a moral victory for the party. While they can still be content with their result, it is not the unambiguously strong performance that it would have been had Cardy and Wilcox traded places. 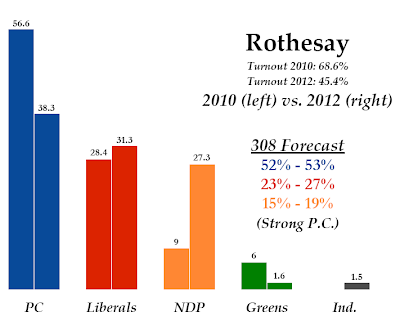 The PCs took a big loss last night, dropping from 56.6% and shedding 1,747 votes. That is a significant number, particularly when you consider turnout dropped by 1,711 votes (from 68.6% to 45.4%). In other words, this was not about Tory voters staying home - the PCs lost votes to the other parties, too.

The Liberals did surprisingly well, considering they are slightly down in the polls and without a leader. They lost only 362 votes but upped their vote share by almost three points. They are still seen as the main alternative to the Tories, at least in Rothesay.

On the face of it, the New Democrats did spectacularly. They gained 624 votes (after capturing only 534 on lower turnout in 2010) and improved their vote share by more than 18 points. But with Dominic Cardy on the ballot, the NDP was gunning for a win. The results fell far short of those expectations. A victory was not out of the question (clearly, as the NDP needed only 468 of the Liberals' votes to come out on top), but as party leader Cardy should have been able to represent the best alternative to the Tories in this particular riding. Their results do match quite closely to what the federal NDP took in 2011 (thanks to reader nbpolitico for the details), suggesting that Cardy was able to max out the NDP's support but was unable to attract many new voters to the party.

The Greens had a horrible night, as they almost always do in by-elections. The party shed 288 votes, earning only 69 and 1.6% overall. They were almost beaten by the independent candidate.

The forecast pegged the riding as Strong P.C., giving them a very high probability of retaining the riding, as they in fact did. The vote forecast was off, though that was expected due to the unpredictable nature of Cardy's effect on the result. The surprise of the night was that the Liberals were able to make gains. Coupled with the NDP's boost, it dropped the Tory vote even further than was expected. 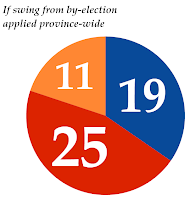 If we apply the swing from last night's by-election province-wide, the Liberals would come out on top with 37% of the vote, with the Tories at 32% and the NDP at 31%. That would give the Liberals a minority government of 25 seats, with the PCs winning 19 and the NDP winning 11.

The Liberals improved their vote share by a smidgen but the New Democrats more than tripled theirs. With the Tories dropping by almost a third, it spells a pretty dramatic defeat for David Alward. But, of course, the NDP won't be able to run Dominic Cardys in every riding and the patronage issue that undoubtedly hurt the PCs in Rothesay was a highly localized one.

It is difficult to choose the big winner from last night's by-election. The Progressive Conservatives won the riding, but they had held it since 1999 and saw their vote share drop to the lowest it has been since before that first victory. They come out slightly bloodied, but with the next election only in 2014 the consequences are rather minimal. As I wrote yesterday, a win is a win for the Tories.

In a way, the Liberals came out of last night's by-election with the most positive news. The party has been slipping in the polls and has yet to name a new leader after Shawn Graham stepped down. Their low profile candidate had to contend with the high profile Cardy, but he nevertheless came within seven percentage points of the Tories and improved his party's vote share. It is a strong sign that the Liberals are still a force to be reckoned with in New Brunswick politics.

For the New Democrats, last night was bittersweet. Cardy demonstrated that he has strong appeal even in a bad riding for the party. Tripling his party's vote share is no small feat, doubling its vote haul in a by-election is impressive as well. But the NDP was hoping for a Cardy win or, at least, a second place showing. That did not happen, but while the New Democrats cannot come out of last night's by-election claiming to be the real alternative to the Tories, they weren't shamed. If another by-election pops up in a more amenable riding for the NDP, Cardy should be able to win it. At the very least, that is what he showed last night.

A warning shot across the bow of the Tories, an encouraging sign for the Liberals, and a respectable performance for the New Democrats. If this trend were to continue through to 2014, the re-election of David Alward would be far from a foregone conclusion.
Posted by Éric at 9:26:00 AM