A month filled with rhetoric, relatively large gains in May by the Conservatives in British Columbia and by the New Democrats in Ontario are signs of a shifting landscape. And for the first time since June 2009, the Conservatives lost the lead - and not just by a few decimal points. 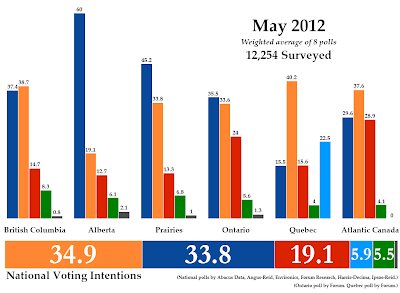 Six national polls and two provincial polls in Ontario and Quebec were conducted during the month of May, surveying a total of 12,254 Canadians. Abacus, Angus-Reid, Environics, Forum, Harris-Decima, and Ipsos-Reid were in the field during the month.

The New Democrats picked up 1.6 points in May, increasing their support to 34.9%. This is a high-watermark for them, and increases their lead over the Conservatives by a full point.

The Tories were up 0.6 points in May to 33.8%, while the Liberals were down 1.5 points to an average of 19.1%, their lowest score since the May 2011 election. May was the third consecutive month of Liberal drop.

On the first anniversary of the 2011 election, the Conservatives averaged 5.8 points lower than their electoral result, while the New Democrats sat 4.3 points higher. The Liberals and Bloc have hardly budged, while the Greens were up 1.6 points. 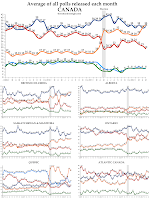 The largest amount of variation between April and May took place in Alberta, where the Conservatives picked up four points to hit 60%. The New Democrats, meanwhile, were down 1.4 points to 19.1% and the Liberals were down 3.5 points to 12.7%. The Greens were up 1.4 points to 6.1%.

A more consequential shift took place in Ontario, where the Conservatives slipped 2.5 points to 35.5%. The New Democrats hit a new high with a 4.6-point gain to 33.6% support, the narrowest gap between the Conservatives and the second place party since November 2010. The Liberals hit an all-time low (at least since January 2009) by dropping 1.7 points to only 24%. This is the fourth consecutive month of Liberal decrease in Ontario. The Greens, at 5.6%, were down 0.4 points.

The Conservatives picked up 2.6 points in the Prairies and led with an average of 45.2% support, while the NDP was down 0.6 points to 33.8%. They have been relatively steady now for four months in Saskatchewan and Manitoba. The Liberals, with a 3.6-point drop to 13.3%, were at their lowest point since the 2011 election. The Greens were up 1.9 points to 6.8%.

The New Democrats slid 2.4 points in Atlantic Canada to 37.6% support, but this still represents a wide lead over the Conservatives. Atlantic Canada has been a very volatile three-way race for some time, and no party has held this wide of a lead for two consecutive months since the Liberals did it in August and September 2010. The Conservatives picked up 2.9 points and averaged 29.6% support, while the Liberals were up 0.7 points to 28.9%. The Greens were down 0.3 points to 4.1%.

For the third consecutive month in British Columbia, the New Democrats led in May with 38.7%, down 0.1 point. The NDP is still at its all-time high on record, and no other party has held a lead against the Conservatives in B.C. since at least January 2009 for more than one month. The Conservatives, however, closed the gap by gaining 3.2 points to reach 37.4% support. The Liberals, at their lowest mark since July 2011, dropped 1.6 points to 14.7%, the fourth consecutive month of loss. The Greens were down 0.4 points to 8.3%. 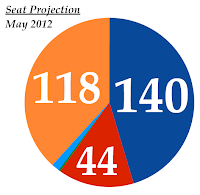 Compared with April, the Conservatives gained three seats in British Columbia and one each in the Prairies, Quebec, and Atlantic Canada. The New Democrats, meanwhile, dropped two seats in British Columbia, Quebec, and Atlantic Canada, explaining their difficulty in beating the Conservatives. Ontario is still the problem, but the NDP did capture four more seats with the May numbers than they did in April (two from the Tories and two from the Liberals).

The Conservatives would have won 19 seats in British Columbia, 27 in Alberta, 19 in the Prairies, 59 in Ontario, five in Quebec, 10 in Atlantic Canada, and one in the North. In the expanded 338-seat House of Commons, they would have likely won 157 seats.

The New Democrats would have won 14 seats in British Columbia, one in Alberta, seven in the Prairies, 29 in Ontario, 58 in Quebec, eight in Atlantic Canada, and one in the North. With the new boundaries, they would likely win 128 seats.

The Liberals would have won two seats in British Columbia, two in the Prairies, 18 in Ontario, seven in Quebec, 14 in Atlantic Canada, and one in the North. That would be bumped up to 47 seats on the new electoral map.

The New Democrats are still in the good position of being able to govern in a minority with the support of the Liberals. Together, the two parties would hold 162 seats and a majority. But the Conservatives are still well-placed to win the most seats due to their strong numbers in Alberta and the Prairies and their better vote efficiency in British Columbia, Ontario, and Atlantic Canada. The New Democrats need to pad their leads on the two coasts by a larger margin in order to pull ahead. And if they can't take the lead in Ontario, they have little chance of winning a plurality without those commanding margins in B.C. and A.C.

The Bloc Québécois and the Greens seem to be in a holding pattern, which is probably not a horrible thing for the Greens (who are, indeed, up in the polls but that is often illusory for the party) but is not very good news for the Bloc. What happens in the next Quebec provincial election, and the aftermath of that vote, will probably play a big role in determining where the Bloc goes from here.

The Liberals are simply in terrible position. They are either below of or marginally up on their May 2011 electoral performance in every part of the country, suggesting that the first 12 months of this Parliament can be written-off for the Liberal Party. They are below 16% support everywhere except Ontario and Atlantic Canada, and in Ontario they are on the downswing. They desperately need their leadership race to boost Canada's interest in their party, but the recent example of the NDP race would suggest that this is not a given.
Posted by Éric at 10:08:00 AM