Friday evening, EKOS Research released their latest poll for iPolitics showing a stable race in Ontario, with the Liberals leading the Progressive Conservatives. This is in contradiction to the previous poll that hit the wires, by Ipsos Reid. But it should be noted that since the campaign officially began (Oracle had a poll out before the writ dropped showing the PCs ahead), Ipsos Reid has been the only pollster to show a PC lead. We're far from consensus (EKOS has a six point edge for the Liberals, Forum had it at seven points, Abacus showed a tie when we last heard from them) but we may be moving towards a higher degree of evidence pointing to a narrow Liberal advantage.

In terms of the seats, the Liberals now lead with 48 (or between 41 and 58) and could potentially win a majority, though a minority remains more likely. The PCs sit at 39 (or between 31 and 47), and could still potentially pull off a win with what the polls are showing. The NDP sits at between 16 and 22 seats. 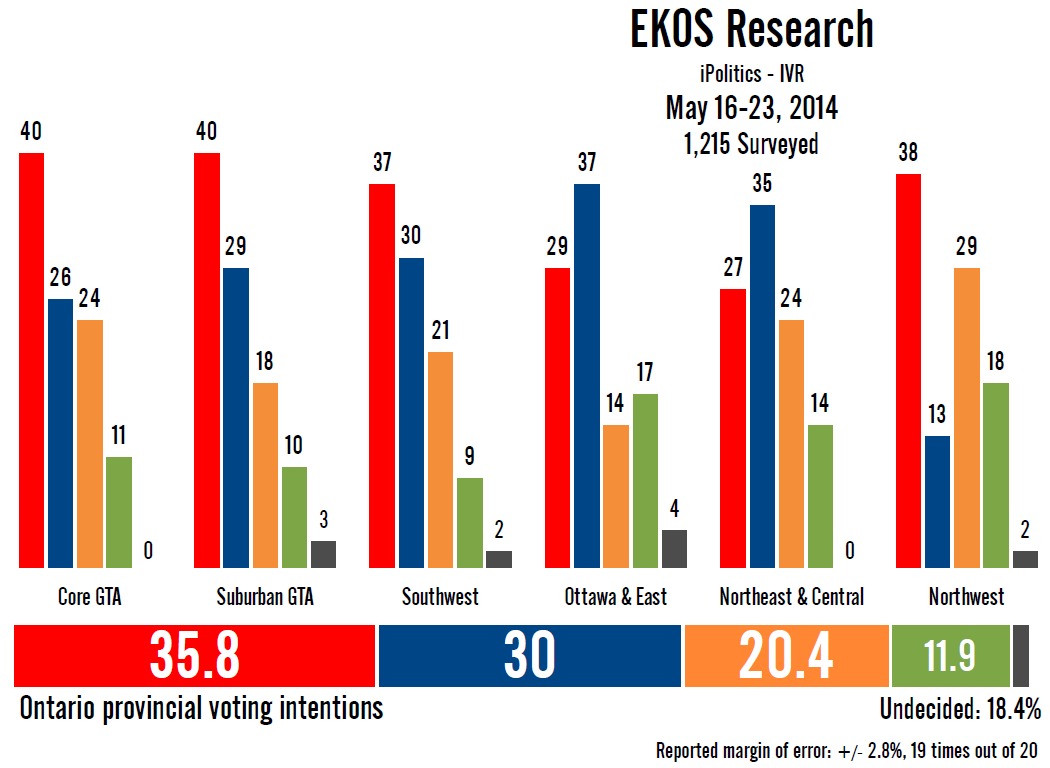 The Greens made a jump of 4.6 points to 11.9%, which is almost certainly a sampling anomaly. EKOS will be releasing likely voter data in their next report, so we can expect the Greens to fall in that regard.

EKOS has been showing very steady numbers in their campaign polling. But the Liberals may not be losing the turnout war anymore. EKOS found that the party had 40% support among Ontarians 65 and older, just ahead of the PCs at 38% (the Tories were ahead by eight points among this group in EKOS's last poll). The Liberals also led among voters aged 45-64.

Regionally, the Liberals held leads in every region except eastern Ontario and the northeastern and central parts of the province (also note that the sample in the Northwest, just 28, has a margin of error of +/- 19 points). The Liberal lead in the southwest is somewhat unusual, but otherwise these numbers are generally what other polls have shown when the Liberals have been in front.

A few regional shifts appear outside the margin of error and are worth noting. But first let's just reiterate that the Green numbers are too high. The party gained 7.7 points in Toronto to hit 10.8%, and gained 12.1 points in eastern Ontario to hit 16.9% - putting them ahead of the NDP. That simply isn't plausible.

Elsewhere, there was a swing between the Liberals and NDP in Toronto. The Liberals dropped 12.7 points to 39.6%, while the NDP gained 9.4 points to reach 23.7%. This seems like more of a reset, as EKOS had abnormally low NDP numbers in the provincial capital last week.

And in the northeast and central part of Ontario, the PCs picked up 15.4 points to reach 34.9% and take the lead.

The polls are still far from clear, as even the polls that give the Liberals the lead hardly agree on the size of that lead. But let's, again, try to make some sense of it.

The chart below shows the polls released so far in the campaign by firms that have reported more than once (including Abacus Data, which has reported just once but will also have new numbers out tonight). Each vertical line represents a day in which a pollster was in the field. So this EKOS poll, for example, has eight lines as it was in the field over eight days. The last Forum poll has one, since it was in the field for a single day. The lines also roughly represent the margin of error for each party in each poll (assuming a probabilistic sample). 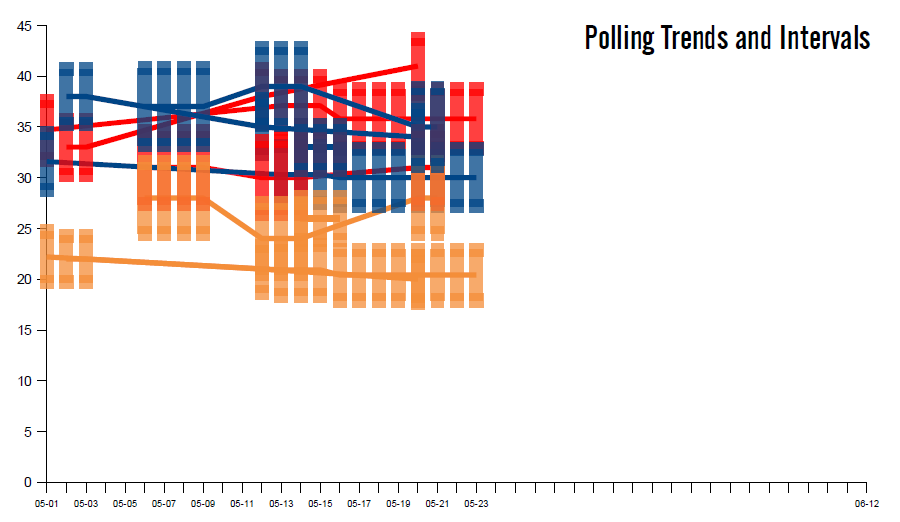 It is still rather muddled and not all of the polls overlap, even when taking into account the margin of error and when they were conducted on the same days. But some patterns do seem visible.

I think something clearer is starting to emerge from this campaign. The Liberals and PCs are in a very close race, but neither have momentum and certainly not the Tories. Nevertheless, if an election were held today - considering turnout implications - the result would still be a toss-up.
Posted by Éric at 12:02:00 PM