Conservatives and NDP up in latest EKOS

Thursday's EKOS poll shows an uptick in support for both the Conservatives and the New Democrats compared to two weeks ago, with the Liberals dropping more than two points. 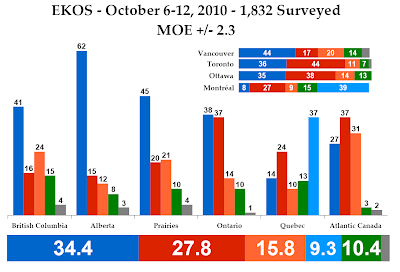 However, the picture is murkier when looking at the situation from week-to-week. Two weeks ago, the Conservatives were at 33.1%. That fell to 31.8% last week but rose to 34.4% this week. So, for the Tories at least, their numbers are just oscillating back and forth.

For the Liberals, they are down 2.1 points from two weeks ago, but are actually up 0.2 points from last week with 27.8%.

The New Democrats went from 13.5% two weeks ago to 16.5% last week and now 15.8%. However, those last two numbers are within the norm for the NDP, a good sign after their disastrous result two weeks ago.

The race is very close in Ontario, and this has been consistent over the last two weeks. The Conservatives lead with 37.8%, compared to 34.2% last week. The Liberals follow with 37.3%, as opposed to 35.1%. So the two parties are trading leads back and forth. The NDP is down to 14.3%, but was at 17% last week, while the Greens are at 9.5%. The Liberals lead in both Toronto and Ottawa with 44% and 38%, respectively. The Conservatives trail with 36% and 35%, respectively. This Liberal lead in the nation's capital has been pretty solid for the past few months. 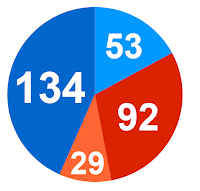 With these poll results, the Conservatives would win 75 seats in the West and North, 48 in Ontario, seven in Atlantic Canada, and four in Quebec for a total of 134.

The Liberals would win 47 in Ontario, 19 in Atlantic Canada, 17 in Quebec, and nine in the West and North for a total of 92.

The NDP would win 11 seats in the West, 11 in Ontario, six in Atlantic Canada, and one in Quebec for a total of 29.

It does seem that the Conservatives have managed to re-create a gap between themselves and the Liberals that is greater than the margin of error. But the race is still very close in Ontario, where the real electoral battle will be waged. Take away the big Conservative gain in British Columbia and this poll becomes very close indeed. But the Tories are where they need to be: a decent lead that can be built upon in an electoral campaign.
Posted by Éric at 11:22:00 AM