What better day to update the house effects chart than a slow and quiet Thanksgiving Monday. I've updated Ipsos-Reid and CROP, incorporating data from September 2010.

We'll use the new house effect numbers to "correct" the latest polls from Ipsos-Reid and CROP, taken at the end of September. First, Ipsos-Reid's national numbers:

While this doesn't change the situation in Quebec very much, it does show a much closer race at the national level.

This still has the Conservatives at a much higher level than most other pollsters, but the Bloc numbers look a lot more realistic. 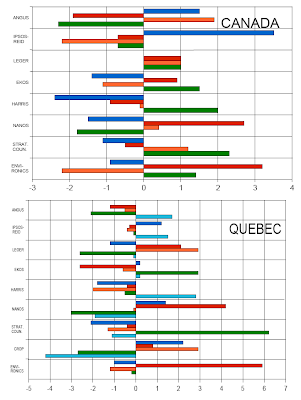