Yesterday, Alice Funke of the Pundits' Guide wrote an article pointing out a few of the concerns she had with my piece yesterday. In that piece, I compared the federal and provincial election results in New Brunswick since 1978, hoping to find some sort of trend that could tell us what to expect in the next federal election.

But before responding to her piece, I think it is necessary to talk a little bit about the philosophy behind each of our two sites. The Pundits' Guide is, bar none, the best political reference for Canadian politics available online. Alice does an incredible job compiling all of the data and her site makes it possible to analyze that data in any number of ways. She also posts on timely topics with great insight, and keeps us up-to-date with riding nominations, by-elections, and financial data for the political parties.

While The Pundits' Guide is about historical election results and the most current information about Canadian politics, ThreeHundredEight.com is about what's next. I cover polls and make projections, and now and then I look at tangential issues from a numbers point-of-view. When I look at those issues or reach back into history, as I did yesterday, it is usually as an attempt to find out what we can about what will happen in the future. ThreeHundredEight.com is about the hypothetical, but based on the best data available.

While our two sites are related by subject matter, our content is very different and our approach is, I'd say, different as well. That is reflected in what I focused on in my post about New Brunswick's electoral history and what Alice did in her critique of it.

So, now that the preamble is out of the way, here is my friendly rebuttal.

First, one of Alice's points of contention was that I used vote-share rather than actual votes. In other words, instead of focusing on how a party got 50 out of 100 votes in one election and 25 out of 50 votes in another, I've focused on the fact that in both cases the result is 50%.

It's a fair point. Using actual votes would have given me a more precise result in terms of comparison, especially when speaking about individual voting behaviour. But when I change the chart to reflect actual votes rather than vote share, it doesn't really tell a different story. Here are the two charts for comparison: 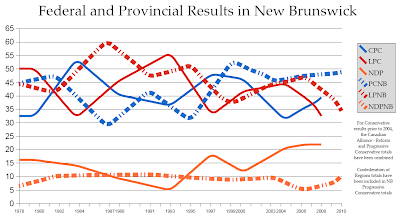 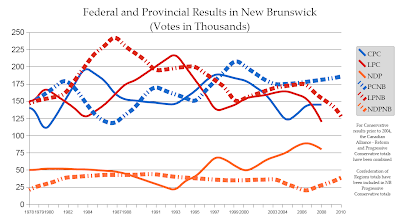 To my eyes, these charts are virtually the same, and in fact using actual votes makes the provincial and federal results mirror each other more closely. I will, however, admit that I should have gone this route as it is more indicative of what has happened in New Brunswick over the last 32 years.

She's correct that combining the results of these parties simplifies matters and tells only half of the story. But that was my intent. My post was not meant as an appraisal of New Brunswick's voting history, it was meant as a means of looking into the future based on what has happened in the past. Does the performance of the Confederation of Regions or the Reform Party tell us anything today? It doesn't, other than that a populist party can gain votes in New Brunswick. Unless a new populist party appears at the federal level, there is nothing to gain from separating these results from those of the Conservatives.

They do, after all, draw from the same pool of voters. As Alice points out, the Confederation of Regions did take votes from both the Liberals and Progressive Conservatives in 1991, but that is more likely because the 1987 election was an aberration. In that election, New Brunswickers ousted a long-time PC premier who was mired in scandal. Those PC voters who voted in Liberal in 1987 are almost certainly the same voters who cast their ballots for the CoR in 1991. If anything, it is probably unwise to read too much into the Liberal performance in 1987, which actually works out fine as the federal performance in 1988 was unimpressive by comparison.

Third, Alice felt I was misguided to not include the Greens in my analysis. Again, this was because of the purpose of my article. I only wanted to look at the Conservatives, Liberals, and NDP because they are the only parties in play in New Brunswick. And since there was no provincial Green Party before this 2010 election, there was nothing to compare the federal Green results to.

Fifth, she took issue with my statement that the same people were voting either Liberal or Conservative (in all its forms) election after election. I'll submit that it was a simplification, but virtually every Liberal gain is matched by a Conservative loss, and vice versa. This is visible in both the vote share and raw vote charts. While a few voters are certainly switching their votes from NDP or Green to the Liberals or the Conservatives, these are undoubtedly a small minority.

Sixth, and this is perhaps the most important, is her disagreement with my conclusions. I concluded that, based on the trends visible in the charts, the Conservatives should gain in the next federal election while the Liberals should lose. Alice called these predictions but I didn't mean them as such. I was taking the next logical step from my original conclusion that provincial and federal voting behaviour in New Brunswick generally follow the same pattern. I was only forming a hypothesis based on what I saw as a trend in the chart.

The purpose of my post was to compare the voting behaviour of Liberals, Conservatives (all branches), and New Democrats at the provincial and federal levels. I've discovered in other provinces that these don't always match, and sometimes they differ by a significant amount. It doesn't seem to be that way in New Brunswick. It goes without saying, however, that I would not base my projections of future electoral results in New Brunswick on this little exercise.
Posted by Éric at 1:41:00 PM