A poll taken by Probe Research at the end of September shows that support for the New Democrats at the federal level has dropped significantly in Manitoba, to the benefit of the Liberals and Conservatives. 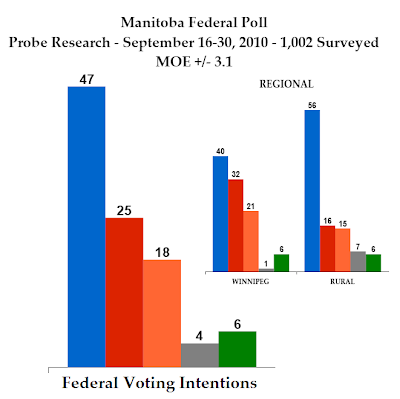 Compared to Probe's last Manitoba federal poll taken in June, the NDP has lost six points and now stands at only 18%. The Conservatives lead with 47%, up three from June but still down two from the 2008 election. The Liberals have moved into second place with 25%, up four from June and up six from 2008.

Using a simple uniform swing method, the Conservatives would be projected to win 10 seats in the province, up one from 2008. The Liberals would also gain a seat and win two, while the NDP would be the loser of those two seats and be reduced to two seats themselves in Manitoba.

The Conservatives would gain the riding of Elmwood-Transcona, while the Liberals would win in Churchill. These are the ridings of Jim Maloway and Niki Ashton, respectively, two NDP MPs who voted to scrap the long-gun registry three weeks ago.

While it is impossible to predict what would happen at the local level, it appears possible that the NDP's perceived stance on the issue, rather than the voting history of individual members, will put several seats at risk of being taken over by the Liberals and Conservatives in the next federal election.
Posted by Éric at 9:33:00 AM