Two polls were recently conducted for the Manitoba provincial election slated to take place in the fall of 2011. One is from Viewpoints Research and the other is from Probe Research. The Viewpoints poll was taken in the first half of September, while the Probe poll was taken in the second half. They both show similar results, but with vastly different consequences. 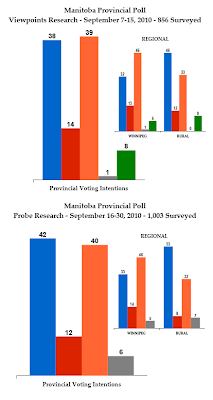 In the Viewpoints poll, the New Democrats lead over the Progressive Conservatives, 39% to 38%. That is well within the margin of error. The Liberals follow with 15%, with the Greens holding at 8%.

Probe, on the other hand, shows a small lead for the Progressive Conservatives, with 42% to the NDP's 40%. Again, this is within the margin of error. These two polls show virtually the same results, especially when you consider that Probe has the Liberals at 12% and "Others" (Greens, mostly) at 6%. This is mostly unchanged from Probe's last poll in June. Probe provides a little more detail, showing that the Progressive Conservatives lead among men, people between the ages of 18 and 34, people over the age of 55, those with a high school education, and those who make more than $30,000 per year. The NDP leads or is tied with the PCs in all other categories.

The similarity in results continues at the regional level. Both Viewpoints and Probe have the NDP in front in Winnipeg with 46%, followed by the Progressive Conservatives at 32% and 35%, respectively. The Liberals are third with 15% and 14%, respectively.

Outside of Winnipeg there is a little more variation, but in either case we have a large lead for the Progressive Conservatives. They lead this region in the Viewpoints poll with 46%, compared to 53% in the Probe Research poll. The NDP is at 33% and 32%, respectively, with the Liberals at 12% and 8%, respectively. Compared to Probe's last poll in June, the Tories have made a big gain outside of Winnipeg, mostly at the expense of the Liberals. 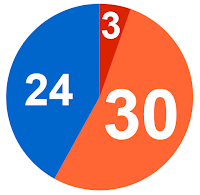 The seat projection is where things are very different. With Viewpoints' results, the New Democrats would win a majority government with 30 seats, while the Progressive Conservatives would take 24. The Liberals would win three seats. It is a narrow majority, but a majority nevertheless. Greg Selinger, Gary Doer's replacement, would win his first election as leader of the Manitoba NDP. 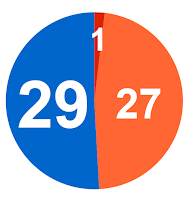 In the Probe poll, however, we get 29 seats for the Progressive Conservatives, 27 for the New Democrats, and one for the Liberals. It's the slimmest of majorities, but the PCs would form government.

These two polls are very different from Angus-Reid's last poll in August, which had the Progressive Conservatives way ahead with 49% to the NDP's 34%. These two polls seem to show a much closer race, and with such a consensus opinion from two polling firms we can comfortably assume that this tight situation is the actual one in Manitoba right now.
Posted by Éric at 1:42:00 PM