Federal and provincial results from CROP

So, La Presse ordered a new poll from CROP, the pollster we last heard from in January. As you may know, I really dislike CROP. They poll irregularly and never release the full results of their findings. They usually also come to conclusions very different from what other pollsters have found, particularly at the federal level.

But first, we'll look at their provincial results, which actually aren't too unusual. 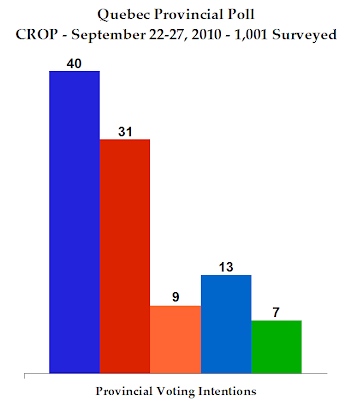 Since that January poll, the Parti Québécois has gained two points and leads with 40%, a number that we've been seeing for months now. The Liberals have dropped nine points, and are at 31%.

Interestingly, comparing this poll to the one nine months ago shows how the situation in Quebec has changed. The Action Démocratique du Québec, which was in the doldrums before the Liberals tanked, is up seven points to 13%. Québec Solidaire is up one to 9% and the Greens are down one to 7%. 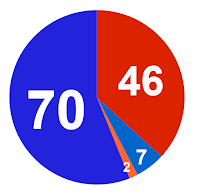 With this poll, the PQ would win 70 seats and form a majority government. The Liberals would win 46 seats, while the ADQ would win seven and Québec Solidaire two.

How QS will perform in the next election, far away as it may be, will definitely be something I am going to watch closely. The party is polling at three times its support level in 2008, and recent by-elections have demonstrated that the party actually does have some legs. But in that last election, only two ridings had particularly strong QS performances: Mercier, where Amir Khadir was elected, and Gouin, where Françoise David finished in a strong second. If the party really is going to be supported by 1 in 10 Quebecers, we could see them in play in other parts of the province.

Now the federal poll, which is just a little odd. 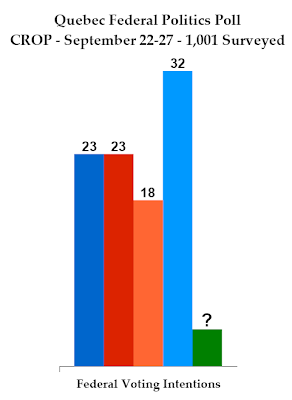 The poll has the Bloc Québécois at 32%, well below what we've seen elsewhere. But this isn't the first time that CROP has had the BQ so low. Oddly enough, though, is that the Liberals aren't performing very well. They're at 23%, which is just about where other pollsters have had them.

Instead, the Conservatives are riding high, with 23%. This is where the poll smells a little. Also, the New Democrats are at 18%, while the Greens are assumed to be at 4%. I don't know, though, since it wasn't reported. 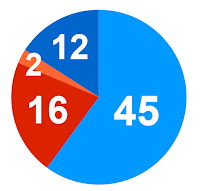 With this poll, the Bloc Québécois would win 45 seats. The Liberals would win 16 and the Conservatives 12. The NDP would win two seats with this result.