It's that time of the month again - time to check in on the best (and now worst) case scenarios that could have taken place during the previous month. Here's the standard explanation of this exercise:

In other words, these projections are the best and worst possible results each party could've gotten had an election taken place last month, based on the available polling data.

We'll start with the New Democrats, who had a pretty bad month. But their best case scenario isn't so bad, with 42 seats and 20.2% of the vote. Their worst case scenario, however, is horrible, with only 14 seats and 12.5% support. 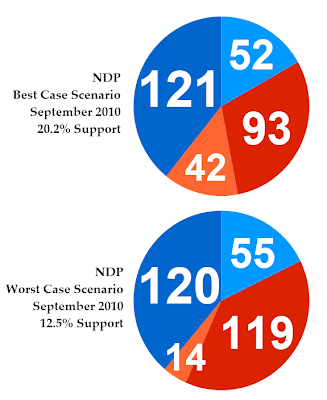 Their BCS (best case scenario) puts them in a terrific position to form a governing coalition with the Liberals, as their combined seat total outnumbers that of the Conservatives. The NDP cobbles together this result with 18 seats in the West, 17 in Ontario, two in Quebec, and five in Atlantic Canada.

Their WCS (worst case scenario) still puts them in a position to work with the Liberals, but unlikely in any formal coalition. With only 14 seats, Jack Layton would lead his party back into the abyss of the 1990s, with only six seats in the West and eight in Ontario, with no seats in either Quebec or Atlantic Canada.

The NDP, probably more than either the Liberals or the Conservatives, would head into an election with a lot of risk. On the one hand, the party has the potential to marginally increase the size of its caucus. On the other hand, the party could be reduced to almost 1/3 of its current size, and be relegated to fringe party status. With only 14 seats, the NDP would even risk losing its standing as an official party if a few seats are picked off in by-elections.

Now, the Liberals. They've had a good month, and their BCS reflects that. The silver lining seems to be that even with their WCS, they can't do worse than they did in 2008. 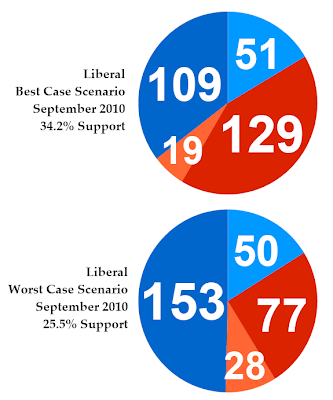 With 34.2% of the vote, the Liberals' BCS is a minority government with 129 seats, compared to 109 for the Conservatives. This would give them the kind of minority that Paul Martin had in 2004 and Stephen Harper had in 2006. They win 21 seats in the West and North, 62 in Ontario, 21 in Quebec, and 25 in Atlantic Canada in this BCS.

In their WCS, the Liberals are reduced to 25.5% support and are kept at 77 seats, while the Conservatives are boosted to 153 seats and a near majority. Arguably, a Conservative majority would be a worse scenario than this, but I'm looking at the situation merely in terms of seats. The Liberals would win 11 in the West and North, 35 in Ontario, 14 in Quebec, and 17 in Atlantic Canada in this WCS.

But, as I said, this shows that the only thing the Liberals risk by heading to an election is a Conservative majority. That might be very scary for them, but the Liberals seem to have hit their floor. They do have the potential to form a minority, something we couldn't say about them only a few months ago.

Now for the Conservatives. Like the NDP, they would head into an election with a lot of risk. They could form a slim majority, or they could be relegated to the opposition benches. 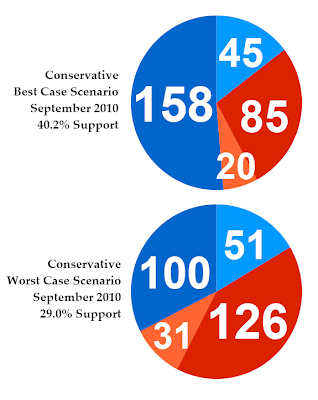 The Conservative WCS puts them at 29.0% support and 100 seats, or a repeat of the 2004 election. The Conservatives would form the Official Opposition, with 59 seats in the West and North, 32 in Ontario, two in Quebec, and seven in Atlantic Canada.

In other words, the Conservatives need to employ an arguably easier strategy of keeping the Liberals where they are and stealing from the NDP, while the Liberals have the trickier task of coaxing votes out of both the NDP and Conservatives.
Posted by Éric at 9:41:00 AM