Yesterday's EKOS poll shows that the New Democrats have lost a significant amount of support over the last two weeks, with all other parties making gains at their expense. 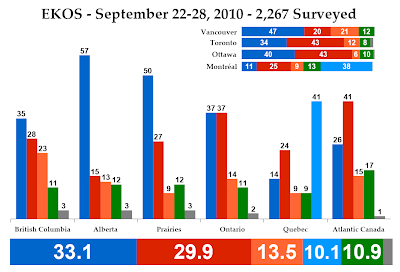 The Conservatives are still in the lead with 33.1% support, however, up 0.7 points from EKOS's last poll two weeks ago. The Liberals are up a full point to 29.9%, but the NDP has dropped 3.1 points to 13.5%. That is a huge drop, especially for an EKOS poll where changes are rarely this large at the national level.

The Conservatives lead in Ontario with 37% support, up two points from two weeks ago. The Liberals are at 36.5%, up one point and very competitive. The NDP is unchanged at 13.8%, while the Greens are down two to 10.7%. The Liberals lead in Toronto with 43.3% and Ottawa with 42.5%. The Conservatives trail in both cities with 34% and 39.8%, respectively.

The Bloc has gained five points and leads with 40.8% support in Quebec, followed by the Liberals at 24.4% (up one). The Tories are down seven big points to 14.1%, indicating that the effects of the arena funding in Quebec City may have gone up in smoke. The NDP is down three points to 8.7%, actually ranking behind the Greens who are at 8.9%. The Bloc leads with 38.3% in Montreal, followed by the Liberals at 25%.

The Liberals are up eight points in Atlantic Canada, and lead with 41.1%. The Conservatives are down seven to 26.2% while the NDP is also down seven, to 14.8%. The Greens have moved into third here with 16.6%.

In Alberta, the Conservatives have gained five points and lead with 56.5%. The Liberals follow with 15.3%, down eight.

The Conservatives are up eight points in Saskatchewan and Manitoba, and lead with 50.2%. The Liberals are second with 26.7% (up five) while the NDP is down 15 points to 9%, running fourth behind the Greens who are at 11.6%. 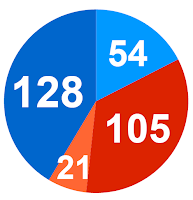 With this poll, the Conservatives would win 68 seats in the West and North, 48 in Ontario, seven in Atlantic Canada, and five in Quebec for a total of 128.

The Bloc would win 54 seats in Quebec.

The NDP would win 11 seats in Ontario, eight in the West, and two in Atlantic Canada for a total of 21.

EKOS also took a look at support for a coalition between the Liberals and NDP, vis-a-vis the Conservatives. Interestingly, in such a situation the imagined Coalition would get 41% support, while the Conservatives would run a close second with 39%. Taking out the "don't knows" or "none of the aboves", that would be a 51% to 49% split in favour of the Coalition.

Again, taking out the non-committal respondents, the Coalition would win 55% support in British Columbia, 62% in Quebec, and 59% in Atlantic Canada. The Conservatives would win with 70% in Alberta, 60% in the Prairies, and 51% in Ontario in a face-to-face contest. Interesting stuff.

But to return to voting intentions, if this trouble for the NDP continue, it will really make things a bit more clear cut for the two main parties. The Liberals (and Bloc Québécois) really do seem to have made some gains at the expense of the NDP, which is generally the scenario the Conservatives are trying to avoid. But, as in all things political, it could change very quickly.
Posted by Éric at 10:13:00 AM