The latest poll from Angus-Reid shows the Conservatives have moved back to their 2008 levels and that the New Democrats have also improved their standing. The Liberals remain unmoved. All this at the expense of the Greens. 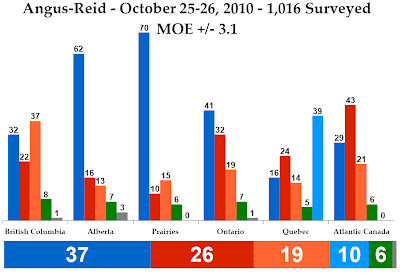 Compared to Angus-Reid's last poll taken between September 27 and 28, the Conservatives have gained three points and now lead with 37%. The Liberals are unchanged at 26% while the NDP is up one point to 19%.

The Bloc Québécois is steady at 10% nationally while the Greens have dropped five points to only 6%.

There are some wild swings in this poll, however, which lead me to urge caution when looking at the regional results.

In Ontario, the Conservatives have gained five points and lead with 41%. The Liberals follow with 32%, down one. The NDP is steady at 19% while the Greens are down four to 7%.

The Bloc has gained one point in Quebec and leads with 39%, with the Liberals up two points to 24%. The Conservatives have dropped one and are now at 16%, while the NDP is down three to 14%.

The New Democrats are up 13 big points in British Columbia, and now lead with 37%. The Conservatives have dropped seven to 32%, while the Liberals are up four to 22%. The Greens are down nine points to 8%.

In Atlantic Canada, the Liberals have dropped five points but still lead with 43%. The Conservatives follow with 29% while the NDP is down nine points to 21%.

The Conservatives have gained 10 points in Alberta and lead with 60%, with the Liberals in second at 16%.

And in the Prairies, the Conservatives are up - 20 points!. The NDP dropped nine to 15% while the Liberals dropped the same amount down to 10%.

Based on what other polls have been saying, the Conservatives likely need to be pruned down in the Prairies and Ontario. The same goes for the NDP in British Columbia. The Liberals look about right, though.

Michael Ignatieff has improved by five net points, with a rating of 16% to 43%.

Angus-Reid also asks respondents about the leaders' personal attributes. Rather than go through them all, it's worth noting some of the major changes.

Ignatieff, on the other hand, seems less boring to Canadians. His score on that trait is down five points to 30%.

Layton is seen in touch by 21% of Canadians, up eight points. The same goes for Gilles Duceppe, up five points to 9%. 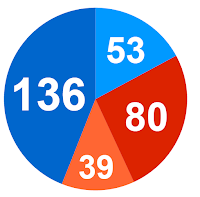 Based on these polling results, the Conservatives would win 57 seats in Ontario, 27 in Alberta, 24 in Saskatchewan and Manitoba, 14 in British Columbia, seven in Atlantic Canada, six in Quebec, and one in the North for a total of 136.

The Liberals would win 34 seats in Ontario, 22 in Atlantic Canada, 15 in Quebec, six in British Columbia, one in the Prairies, and two in the North for a total of 80.

The Bloc Québécois would win 53 seats in Quebec.

The NDP would win 16 seats in British Columbia, 15 in Ontario, three in Atlantic Canada, three in Saskatchewan and Manitoba, one in Quebec, and one in Alberta for a total of 39.

Though the Conservatives are up three points nationally, this polling result gives them only one more seat than they would have won at the end of September. That is because a lot of the gains the party has made are wasted in the Prairies and Alberta, where the Conservatives are already maxed out. The party is not doing well enough in Quebec, Atlantic Canada, and British Columbia to win as many seats as the Conservatives currently hold in these regions.

The Liberals, in their immobility, lose 11 seats as compared to Angus-Reid's last poll. The party is flat in British Columbia and Ontario, and is still struggling to improve its standing in Quebec.

The big gainer in this poll, then, has to be the New Democratic Party. The NDP would win nine more seats than Angus-Reid's last poll. They are doing very well in British Columbia and Ontario, the two provinces that are key to NDP gains in the next election.
Posted by Éric at 4:05:00 PM