Tories down, Force Quebec up?

Léger Marketing's new poll on the political situation in Quebec at both the provincial and federal levels has a few interesting tidbits. Notably, the rise of the Others at the provincial level.

By my estimation, this has to be chalked up to the recent talk about "Force Québec", which I wrote about recently for The Globe & Mail. The "Others" are never this high in a Léger poll, and there's really no other way to explain it. Undoubtedly voters' distaste with both traditional options plays a role, but now that an "Other" has emerged as a potential option, it seems to be garnering much more support than a hypothetical party should. 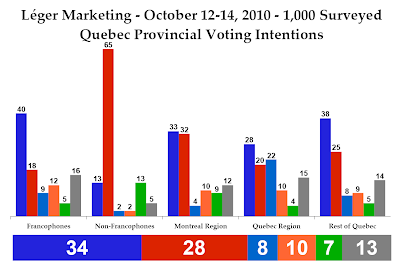 The Parti Québécois still leads, however, with 34%. That is down six points from Léger's last poll in mid-September, and almost all of those votes went over to the "Others". The Liberals are also down, dropping four points to 28%.

Force Quebec, which I think we can consider the Other vote, is up almost everywhere. The option is up 15 points among francophones, and is in third place behind the PQ (40%) and Liberals (18%) in this demographic. FQ is up ten in Montreal to 12% and 14 in Quebec City to 15%. The potential party is also up 13 points in the Rest of Quebec to 14%.

Québec Solidaire is relatively stable, but is down two points in Montreal to 10%.

The ADQ is down a little everywhere, but particularly in Quebec City. The party has dropped six points to 22% there.

The Greens are up two points among allophones to 13%.

Only 19% of Quebecers are satisfied with Charest's government.

And while it would appear that an avenue is opening up for a national-question-neutral party like Force Quebec, the numbers show that there is still a majority of Quebecers (58%) who believe that leaving aside the question of Quebec's place in Canada cannot be done. 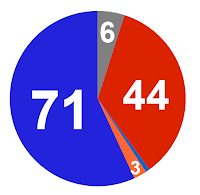 With this poll, the Parti Québécois would win 71 seats and form a majority government.

The Liberals would win 44, Québec Solidaire three (all in Montreal), and the ADQ would win one. Force Quebec, or whatever the Other option is, would win six seats, all in the ADQ's traditional areas of strength.

Now on to the federal polling results.

Here, we see gains for the Bloc Québécois and the Liberals, all at the expense of the Conservatives. 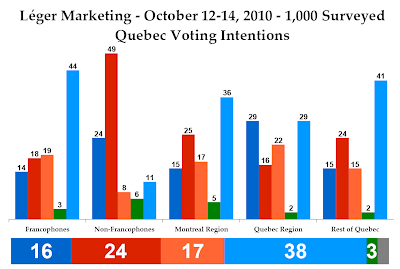 Compared to that mid-September poll, the Bloc has gain two points and now leads with 38%. The Liberals, also up two, are at 24%.

The New Democrats are steady at 17% while the Conservatives have lost five points. They are at 16%.

Bloc gains came everywhere in the province, but particularly in Montreal and outside of the two main cities. The Bloc leads with 36% and 41% in these two regions, respectively. That is a gain of two points for each. The party is also up one in Quebec City, and is tied with the Tories at 29%.

The Liberals made gains in the "rest of Quebec", jumping seven points to 24%. They are down in Montreal and Quebec City, however.

The NDP is up seven in Quebec City to 22%. They are down six among allophones.

The Conservative losses came in their bread-and-butter regions: Quebec City and the "rest of Quebec". Down eight points to 29% in the capital and down nine to 15% in the RoQ, the Conservatives are at great risk of losing over half of their seats in the province. 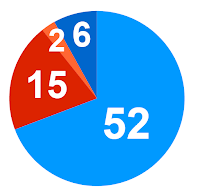 But the Bloc would pick-up four new seats, and win 52 overall. The Liberals would win 15, the Conservatives six, and the NDP two.

At the federal level, this is the status quo. The Bloc leads, the Liberals are safely in second, and the Conservatives can't seem to get back to the 20% mark. At the provincial level, talk of this non-existent party is shaking things up, but the PQ still has the edge.
Posted by Éric at 9:54:00 AM