Steady as she goes in new Harris-Decima poll

Harris-Decima's new poll shows very little change from two weeks ago, with the race between the Conservatives and the Liberals as close as ever and within the margin of error. 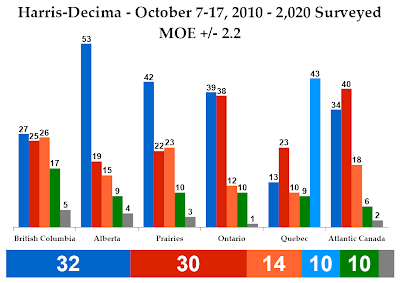 At 32%, the Conservatives have dropped one point from Harris-Decima's last poll. The Liberals are steady at 30%, as are the New Democrats at 14%.

The Greens are down one to 10% and the Bloc Québécois is steady at 10%.

One of the factors in this poll is the large (4%) result for "Others". As the largest regional results for this group is out West, we can probably assume that the Tories would pick up about two of the three points that the "Others" would give up on election day. It should help them in British Columbia but the party is already virtually maxed out in Alberta and the Prairies.

In Ontario, the Conservatives lead a very close race with 38%, up four points from two weeks ago. The Liberals are up one to 38%, while the NDP is down two to 12%. That is way too low for Jack Layton's party. The Greens are also down two, but to 10%.

The Bloc has picked up five points in Quebec and leads with 43%, followed by the Liberals at 23% (down two). The Conservatives are out of it with 13% (down one) and the NDP is up one to 10%.

British Columbia is a three-way race, with the main parties statistically tied. Even the Greens are in it. The Tories lead with 27% (down ten), followed by the NDP at 26% (up six) and the Liberals at 25% (down two). The Greens are up three to 17%.

The Liberals lead in Atlantic Canada with 40%, a gain of six points. The Conservatives follow with 34% and the NDP has dropped five to 18%.

The Conservatives have lost eight points in Alberta but lead with 53%. The Liberals are running second at a very good 19% and the NDP is up seven to 15%. 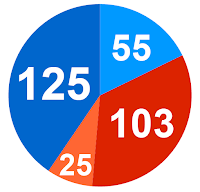 With this poll, the Conservatives would win 50 seats in Ontario, 26 in Alberta, 21 in the Prairies, 14 in British Columbia, nine in Atlantic Canada, four in Quebec, and one in the North for a total of 125.

The Liberals would win 49 in Ontario, 21 in Atlantic Canada, 15 in Quebec, 11 in British Columbia, four in the Prairies, two in the North, and one in Alberta for a total of 103.

The Bloc would win 55 seats in Quebec.

The New Democrats would win 11 seats in British Columbia, seven in Ontario, three in the Prairies, two in Atlantic Canada, and one each in Alberta and Quebec for a total of 25.

The Liberals and NDP would combine for 128 seats, making a minority government led by Stephen Harper and his party's 125 seats very precarious.

This poll doesn't tell us anything new, not that individual polls usually do. It does help to solidify what is the present polling narrative: close races nationally, in Ontario, and in British Columbia, but with the Conservatives holding the edge in all three.
Posted by Éric at 9:42:00 AM