While on the face of it the new EKOS poll shows relatively little change at the national level, what we really see is that the political voting intentions of Canadians have snapped back to what they were two weeks ago, after the race tightened in the interim. 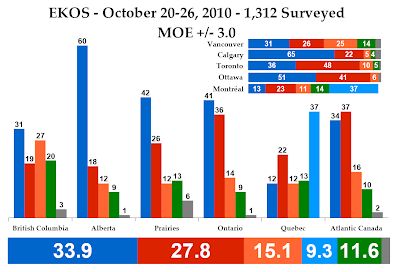 Take the Conservative lead, for example. Two weeks ago, EKOS reported the party's national support at 34.4%, and now it is at 33.9%. That's a drop of 0.5 points, relatively insignificant, but in between the Tories sank to 30.9%.

It's a similar situation for the Liberals, who are unchanged at 27.8%. But a week ago the Liberals had gained 1.6 points and stood at 29.4%, a mere 1.5 points behind the Conservatives.

The New Democrats, however, have not snapped back so violently. From 15.9% the party sank to 13.9% a week ago. Today, EKOS has them at 15.1%. While that is a gain of 1.2 points in the last week, the party is still 0.8 points behind their standing two weeks ago.

The Bloc Québécois is at 9.3% national support while the Greens are up to 11.6%, 1.2 points higher than they were two weeks ago.

The Conservatives are performing well in Ontario and Atlantic Canada, in addition to their western strongholds. In Alberta, the party leads with 60.3%. The Liberals are well behind at 17.6%, but are at 21.8% in Calgary. The Conservatives lead in that city with 65.2%.

The Tories are also well in front in the Prairies, with 42.4% support. The Liberals have gained six points from two weeks ago and trail with 26%. The NDP is down nine points to 12.4%.

In Atlantic Canada, the Liberals lead with 37.3% but the Conservatives are up seven points to 34%. That gain seems to have come off the backs of the NDP, who are down 15 points to only 16.4%.

But before anyone gets too excited about the "Rob Ford Effect", it should be noted that the Liberals lead in Toronto with 48.4%. The Conservatives are running second with 35.7% in the city.

Conversely, the Conservatives are leading with 51.1% in Ottawa, where provincial Liberal Jim Watson was just elected mayor.

There are some trouble spots for the Tories, however. In British Columbia, the party has dropped 10 points and leads with only 31.3%, followed by the NDP at 26.6% (up three), the Greens at 20.1% (up five), and the Liberals at 19.2% (up three). The race is also tight in Vancouver, where the Conservatives have 30.5% support compared to 26% for the Liberals. 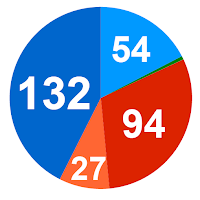 With the results of this poll, the Conservatives would win 55 seats in Ontario, 27 in Alberta, 20 in Saskatchewan and Manitoba, 17 in British Columbia, nine in Atlantic Canada, three in Quebec, and one in the North for a total of 132. That is a loss of two seats compared to EKOS's poll two weeks ago, but the gain of seven in Ontario is a good omen for the Tories.

The Liberals would win 41 seats in Ontario, 20 in Atlantic Canada, 17 in Quebec, seven in British Columbia, six in Saskatchewan and Manitoba, two in the North, and one in Alberta for a total of 94. That is a gain of two seats, but the loss of six in Ontario is bad news.

The Bloc would win 54 seats in Quebec, buoyed by the weakness of its opposition.

The New Democrats would win 11 seats in British Columbia, 10 in Ontario, three in Atlantic Canada, two in the Prairies, and one in Quebec for a total of 27. That is two seats less than two weeks ago. Their loss of three seats in Atlantic Canada hurts them.

The Conservatives have begun to move away from the Liberals, after a few weeks of a closer race. But their gap is still tenuous, and the week-to-week results in Ontario and British Columbia indicate that an election campaign could be very volatile in these two battleground provinces. If the Conservatives want to make gains as compared to their current standing in the House of Commons, however, they need to rebuild some bridges in Quebec. The Liberals, meanwhile, need to desperately drag the Conservatives down from their summit in Ontario.

Voting intentions still seem to be pretty set, however, with no major trends or movements in any part of the country. It may take an election campaign or some unexpected event to make people budge.
Posted by Éric at 9:51:00 AM