Arsenault on track to win Bonaventure

Quebecers love polls. Le Devoir/The Montreal Gazette and La Presse put out polls on a monthly basis, while in the last federal campaign one-third of Quebec's 75 ridings were polled individually. Less than a dozen were polled in the rest of the country.

A by-election in a safe Liberal riding far removed from Quebec's urban centres would not, you would think, garner much attention. But no, this week a second poll for the Bonaventure by-election has been released. By comparison, the last spate of federal by-elections, two of which were hotly contested and in major urban centres, were not polled at all!

This Bonaventure by-election, however, is not insignificant. Pauline Marois has been pressing the flesh for days in the riding, despite the odds being stacked against her. Helping out the local PQ candidate Sylvain Roy raises the stakes for Marois, as a loss will hurt her more than it otherwise would have. Of course, the PQ put off a national convention for this by-election so it would have been bad optics for her to put up her feet this past week. 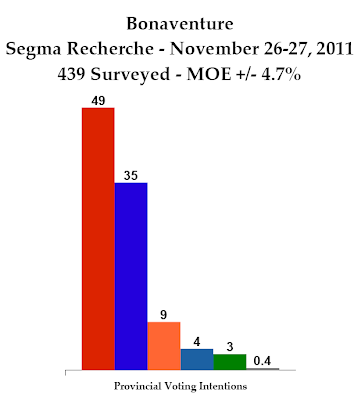 But for all her efforts, it does not look like the Parti Québécois will pull off another upset in Bonaventure like they did in Kamouraska-Témiscouata a year ago. The poll by Segma Recherche for Graffici.ca and a local radio station suggests that little has changed since their last poll taken mid-campaign.

Liberal candidate Damien Arsenault has dropped only three points, and leads with 49%. Granted, that is a big drop from Nathalie Normandeau's numbers, but it is still almost a majority. The PQ is down one point to 35%, while Patricia Chartier of Québec Solidaire is up three points to 9%. That is not a bad number for QS, as it has not had a great record outside of Montreal.

The ADQ's Georges Painchaud is only at 4%, while Jean Cloutier of the Greens is at 3%. Cloutier got some attention this week as he invited francophones to vote for the PQ as it has the best chance to win while also having what he considers better positions on the environment.

For the other parties, Charest is the lightning rod. More than half said they were voting for another party because of their dissatisfaction with the Liberals, while only 23% identified the candidate as their primary reason for voting the way they intend to.

But what if François Legault's CAQ had entered a candidate into the race? Painchaud was likely hoping that an ADQ/CAQ merger would already be in the works by the day of the vote when he decided to carry the ADQ banner. But it would not have necessarily given him a win. Only 15% of respondents said they would have voted CAQ if the party had entered a candidate into the race. That would have put the party in a decent third, dropping the PQ to some 29% according to the poll, but nowhere near the Liberals, who would have dropped to about 45%.

Monday's vote looks like a slam dunk for Damien Arsenault and the Liberals, giving Jean Charest the first bit of good news he has had in quite some time. Though 35% would be a good improvement over the PQ's performance in the riding in 2008, it might not be enough of a gain to give Marois something to boast about. Will she survive the results? I don't think Bonaventure will put a stake in her leadership's heart, but it might be another nail in the coffin.
Posted by Éric at 10:34:00 AM