With the NDP’s support beginning to slip in Quebec, a recent survey from Forum Research indicates that among the party’s supporters Thomas Mulcair is the leadership candidate seen as the best person for the job.

The poll, conducted on December 13 and surveying some 300 NDP supporters, suggests that roughly half (47 per cent) of the party’s voters are unsure who would make the best leader. But of the 53 per cent who expressed an opinion, Mulcair garnered 45 per cent support, well ahead of fellow MP Peggy Nash (16 per cent).

You can read the rest of the article on my thoughts on what these numbers mean at The Huffington Post Canada here.

For all of the actual numbers from the poll, keep reading. But before we get to the leadership numbers, let's look at the voting intentions of those surveyed in this IVR Forum poll. 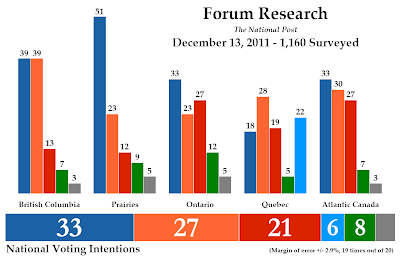 This is the first federal poll that Forum Research has released since the election, so we don't have anything to compare it with. Nevertheless, the Conservatives lead in this poll with 33%, six points ahead of the NDP at 27%.

This six-point gap has been repeated in other surveys.

This poll is marred a little, however, by an overly large "Other" response. One imagines that this is something to expect in IVR polling, and much of that other (5% nationally) probably represents undecided voters.

Forum has the Conservatives down to 33% in Ontario, with the Liberals trailing at 27% and the NDP at 23%. The one remarkable number is the 12% for the Greens, which would be enough to put them in striking distance of a seat in the province - though we're likely talking about the outside edges of the MOE.

In Quebec, the New Democrats are down to only 28%, the second poll to put them below 30% support. The Bloc Québécois stands at 22% while the Liberals and Conservatives are almost tied with 19% and 18% support apiece. But these numbers are deceptive, as 8% of respondents said "Other". Sorry folks, François Legault isn't running federally! Portioning out that 8% more reasonably boosts the NDP to 30% and the Bloc to 24%.

Forum has the Conservatives and New Democrats tied at 39% apiece in British Columbia and the three main parties neck-and-neck in Atlantic Canada. The pollster has also taken on Nanos's bad habit of lumping Alberta, Saskatchewan, and Manitoba together. In this Albersaskitoba the Conservatives stand at 51% to the NDP's 23%. 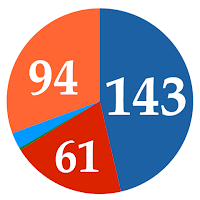 These numbers would give the Conservatives 143 seats, the New Democrats 94 seats, the Liberals 61 seats, the Bloc Québécois nine seats, and the Greens one.

The Conservatives win 19 seats in British Columbia, 27 in Alberta, 19 in the Prairies, 52 in Ontario, 11 in Quebec, 14 in Atlantic Canada, and one in the north, putting them 12 short of a majority and 23 seats short of their current standing. In the 338-seat House of Commons their number would probably increase to 159, or 10 short of a majority.

The New Democrats win 15 seats in British Columbia, one in Alberta, six in the Prairies, 23 in Ontario, 42 in Quebec, six in Atlantic Canada, and one in the north.

The Liberals win one seat in British Columbia, three in the Prairies, 31 in Ontario, 13 in Quebec, 12 in Atlantic Canada, and one in the north.

Of note is that a combination of Liberal, NDP, and Green seats would total 156, or a majority. In a 338-seat House they might win 170, or one above the majority threshold.

Now, the NDP leadership poll. Forum asked supporters of the NDP in the 2011 federal election who they thought would be the best leader of the New Democrats. Fully 47% were undecided, but of the 53% who were decided Thomas Mulcair came out on top with 45% support. Peggy Nash followed with 16%.

After that, we get into the dregs. With a margin of error of about 8%, we can only really say with real confidence that Mulcair is definitely ahead and Nash is probably ahead of the peloton.

In that peloton is Brian Topp and Niki Ashton at 8%, Roméo Saganash at 7%, Martin Singh at 5%, and Paul Dewar, Robert Chisholm, and Nathan Cullen at 4%.

As I mention in my article, this could be all about name recognition. It isn't a predictor of who will win the race, since it is members and not voters that will decide. But if Brian Topp wins with 8% name recognition among decideds (or 4% among undecideds) that is a wee bit of a problem.

The chart at the top of the page that tracks the leadership support of NDP voters does not take out the undecideds. If we keep the undecideds in the calculation, we get 47% without an opinion and approximately 24% support for Mulcair, 8% for Nash, 4% for Topp, Ashton, and Saganash, 3% for Singh, and 2% for Dewar, Chisholm, and Cullen.

At the very least, if the NDP chooses Mulcair, Canadians will have a good idea of what they are getting, or at a minimum will know the name of the Official Opposition leader. If the NDP chooses Topp or Dewar or Nash, the party will need to work on defining their new leader and getting Canadians to know him or her. That means lost time and an opportunity for the Conservatives to do what they did so successfully to Michael Ignatieff.

It will be interesting to see how these numbers move as the leadership race continues.
Posted by Éric at 10:03:00 AM