While new Bloc Québécois Leader Daniel Paillé and former New Democratic Party president Brian Topp do not have much in common, they both are without a seat in the House of Commons. If Mr. Topp wins the NDP leadership race, this will put him and the Bloc chief squarely in the minority of Canada’s political leaders since Confederation.

Brian Topp has said he will run in Quebec if he wins the NDP leadership, but the latest polls show that he'll have some work cut out for him. While a recent CROP suggested that the NDP was alright at 36% or so, new surveys from Harris-Decima, Forum Research, and Léger Marketing indicate that the bottom may be falling out for the NDP in Quebec. Let's look at the Léger survey today. 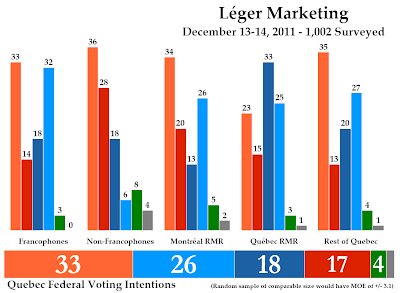 Léger was last in the field between November 14-17, and since then the New Democrats have dropped four points to 33% in the province.

Around November, we were seeing the NDP slipping from the low-to-mid 40s to the high 30s. Now, it appears that the New Democrats are slipping again, though this time to the low-30s or high-20s.

The Bloc Québécois has not, in this survey at least, made any gains. They've actually dropped one point to 26%.

Instead, the Conservatives have made a three-point gain and now stand at 18%, compared to 17% for the Liberals (+2).

Though they would still lose between 10 and 20 seats, the NDP can still work with this kind of lead - they are still the dominant party in the province. But any lower and a lot of bubble seats get flipped to the Bloc.

This is primarily because the francophone vote is now split between the two parties. The NDP has dropped seven points among francophones to 33%, now just one point ahead of the Bloc (down one point themselves).

The New Democrats are leading once again among non-francophones, but these are always small samples. The NDP is up eight points since November to 36% while the Liberals are down nine points to 28%. It could be coincidence, but with the calls the Conservatives were having made in Irwin Cotler's riding it is perhaps not a surprise that the Tories have dropped six points to only 18% among non-francophones in Quebec.

Regionally, there has been little change in the Montreal region, with the NDP still holding a lead over the Bloc. In Quebec City, however, the NDP's support has dropped by nine points to 23%, behind the Bloc at 25% (+1) and the Conservatives at 33% (+5).

There has also been little change in the rest of Quebec, with the NDP and Bloc taking a small step backwards to the benefit of the Conservatives.

With this seven-point lead over the Bloc Québécois, the NDP would win 45 seats of the 75-seats in Quebec. That is still a large portion, but down 14 from their current standing. The Bloc Québécois would win 12 seats, making them an officially recognized party in the House, while the Liberals win 10 and the Conservatives eight.

The last couple of weeks have shown just how fragile the NDP's support in Quebec can be. A new leader may turn the tide and push the New Democrats back to dominance in the province, but it is far from a sure bet. A misstep could easily push the NDP down into second place in Quebec. They don't have to worry much about third or fourth again, however, as it does not appear that the Liberals or Conservatives are resonating very much.
Posted by Éric at 11:18:00 AM