NDP up in Ontario, down in Quebec

After a vote that dramatically changed the federal political landscape and elections in half of the country’s provinces, 2012 promises to be a quieter year than 2011. But there are still a few things to keep an eye on over the next 12 months.

You can read the rest of my article on what to watch in 2012 at The Huffington Post Canada here. 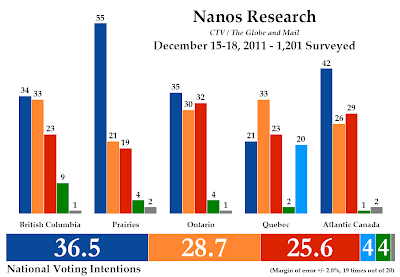 For Nanos Research, which was last in the field in mid-November, there hasn't been much change at the national level. The biggest shift has been a 2.5-point drop for the Liberals to 25.6%, putting them behind the Conservatives (36.5%, +0.9) and the New Democrats (28.7%, +1.4). But all of these variations are within the margin of error.

Most of the regional shifts are also within the margin of error, except in Ontario. There, the Conservatives are at 34.5% but the Liberals have slipped seven points to 31.8%. The NDP has taken advantage, gaining 9.9 points to reach 29.5%.

The Conservatives have been on a bit of a downturn in Ontario in Nanos's polling, and this isn't the first poll to put the NDP at a decent amount of support after slipping to the low 20s in September and October.

In Quebec, the New Democrats have dropped again to 33.4%, echoing what other recent polls have shown. The Liberals are second with 22.9%, while the Conservatives stand at 20.8% and the Bloc Québécois at 19.9%. That is Nanos's highest result for the BQ since the election, but is still somewhat lower than what other surveys have suggested. Nevertheless, Nanos has been showing the Bloc on the rise of late.

The race in British Columbia is close, with the Tories at 34.4% and the NDP at 33.2%. The Liberals are up to 22.8%, while in the Prairies the Conservatives are doing quite well, as they are also doing in Atlantic Canada. 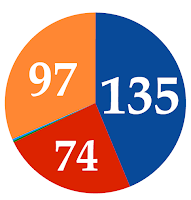 On the 308-seat map, the Conservatives would win 135 seats with this level of support. The New Democrats would win 97 seats and the Liberals 74, making them the big gainers. The Greens keep their one seat in British Columbia while the Bloc Québécois is reduced to one seat.

The NDP wins 13 seats in British Columbia, one in Alberta, two in the Prairies, 26 in Ontario, 49 in Quebec, five in Atlantic Canada, and one in the north.

The Liberals win six seats in British Columbia, five in the Prairies, 34 in Ontario, 15 in Quebec, 13 in Atlantic Canada, and one in the north.

The year closes with three things to watch in federal polling. Firstly, will Ontario continue to be a close race, will one party move ahead, or will it return to a two-horse contest? Secondly, where is the NDP going in Quebec? And thirdly, who is going to take the lead for good in British Columbia? The battlegrounds and story lines for 2015 may already by forming.
Posted by Éric at 11:27:00 AM