Six federal polls were released for the month of November, three of them national, two of them for Quebec, and one for British Columbia. In all, 6,804 Canadians were surveyed during the month. The weighted average of these polls indicates that, compared to the October averages, the Conservatives have shed the most support, but it is the Greens and the Bloc Québécois that have made the gains. 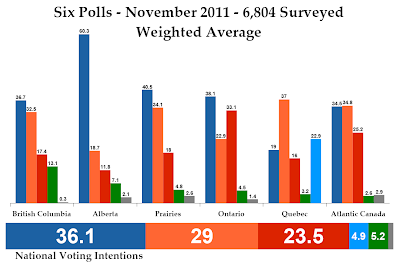 The Conservatives averaged 36.1% national support in November, down 2.3 points from October. The New Democrats and Liberals each dropped 0.5 points, to 29.0% and 23.5%, respectively.

At this level of support, the Conservatives are back to where they were in August, when the death of Jack Layton resulted in a bump of sympathy for the New Democrats. At 29%, however, the NDP is at their lowest level of support since April. 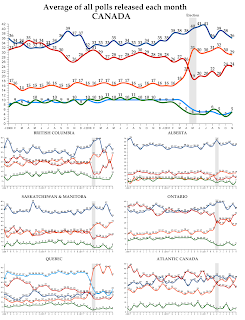 The Conservatives dropped 3.6 points in Ontario and stood at 38.1% in November, ahead of the Liberals who, at 33.1%, were up 1.9 points. This is the highest the Liberals have reached in Ontario since before the federal election. The New Democrats were up 0.1 point to 22.9%, while the Greens were up 0.2 points to 4.5%.

In Quebec, the New Democrats dropped 7.5 points from October to November, a major shift in support. They averaged 37% last month, their lowest level of support since April. The Bloc Québécois gained 5.5 points to reach 22.9%, their highest since the election, while the Conservatives slipped 0.6 points to 19.0%. The Liberals were up 2.8 points to 16.0%, and the Greens were up 1.2 points to 3.2%.

The Conservatives dropped 5.6 points to 36.7% in British Columbia, allowing the New Democrats to pick up 8.3 points to reach 32.5%. The Liberals fell 8.7 points to 17.4%, while the Greens were up 6.2 points to 13.1%. This is the highest level of Green support in the province since January.

There was more change in Saskatchewan and Manitoba, as the Conservatives fell 7.5 points to 40.5%. The NDP picked up 1.7 points and stood at 34.1%, while the Liberals were down 0.4 points to 18.0%. The Greens were up 3.6 points to 4.8%. This is the lowest level of support I have for the Conservatives and the highest for the NDP in the Prairies since I started calculating monthly averages in January 2009. Have I been at this for that long? 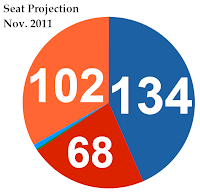 As you can see, I have changed the positioning of the parties on the seat projection pie chart. I placed the parties according to the left-right spectrum, since it gives a little more information than the random placement I had before. Placing the parties in this manner allows people to, if they wish, look at it from the perspective of left vs. right. You could say that on this chart the left-centre has a strong majority, or you could say that the right-centre has an even stronger majority. Or, you can not look at it this way at all. At least it provides the option.

The Conservatives take 19 seats in British Columbia, 27 in Alberta, 15 in the Prairies, 51 in Ontario, eight in Quebec, 13 in Atlantic Canada, and one in the north. A rough estimate gives them 150 seats in the 338-seat House of Commons that is planned for the 2015 election.

The New Democrats take 12 seats in British Columbia, one in Alberta, eight in the Prairies, 19 in Ontario, 53 in Quebec, eight in Atlantic Canada, and one in the north. Their 338-seat estimate is 110.

The Liberals win four seats in British Columbia, none in Alberta, five in the Prairies, 36 in Ontario, 11 in Quebec, 11 in Atlantic Canada, and one in the north. Their 338-seat estimate is 74.

The Bloc's three seats are, of course, in Quebec while the Green seat is in British Columbia. They would still win this many seats in the 338 scenario.

November was a bit of a rough month for the Conservatives, as they dropped in every part of the country except Alberta. Their slips in Atlantic Canada and Quebec were insignificant, but British Columbia, the Prairies, and Ontario look to be important battlegrounds going forward. Yes, I include the Prairies as I believe that Saskatchewan will be a much more competitive province in 2015.

For the NDP, they are looking good in the West and on the Atlantic coast, but they need to be doing much better in Ontario if they ever want to form government. Their drop in Quebec is not too worrisome just yet as the Bloc hasn't really taken off, but if they choose the wrong leader from the province's perspective things could get dangerous for them.

And the Liberals are not looking very good anywhere but in Ontario. They are generally back to where they were there prior to the May debacle, but they are shedding support in Atlantic Canada, the one region they salvaged in the federal election.

Of course, things are going to be shaken up on Sunday when the Bloc names its leader and in March when the NDP names theirs. But any gains will need to be maintained by these new leaders and any losses will need to be made good, making their current standings in the polls not insignificant.
Posted by Éric at 10:21:00 AM