Federal and provincial polls for Quebec were released by CROP and La Presse two weeks ago, but considering that the most recent Nanos poll (released this week) was taken only a day after this CROP poll, it isn't as relatively out of date as it might look. Let's take a peek at the federal results first. 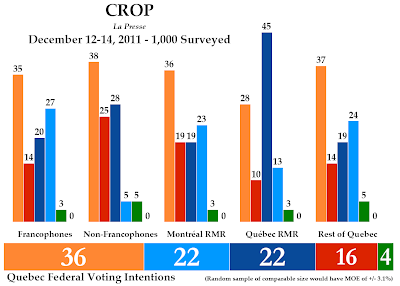 Contrary to what some other polls have shown, CROP does not have the NDP in free-fall in Quebec. Instead, they have them at 36%, down only one point from their last polling conducted November 21-23.

It does put CROP at the high end of NDP polling in Quebec for December, as others have had them between 26% and 33%, and all of them have shown them dropping by a significant amount.

But compared to the Léger poll taken December 13-14, so on the same days as this CROP poll, there is not much difference. Aside from the NDP being a few ticks higher here and there, CROP and Léger show virtually the exact same results across the board, particularly when taking into account the margin of error.

The New Democrats would win 53 seats with these numbers, with 11 going to the Conservatives, seven to the Liberals, and four to the Bloc Québécois.

The Conservatives and Liberals get the support of a few sovereigntists, at 13% and 11%, respectively. But these are very small numbers. Instead, it is the New Democratic Party that is getting the support of a lot of sovereigntists: fully 32% of NDP voters support independence. This means that the NDP's voter profile is actually quite similar to the profile of the average Quebecer. But keeping that 32% of voters happy is going to be difficult if Daniel Paillé bangs the sovereigntist drum, as he has promised to do.

Now to the provincial scene, where things are in a state of flux. 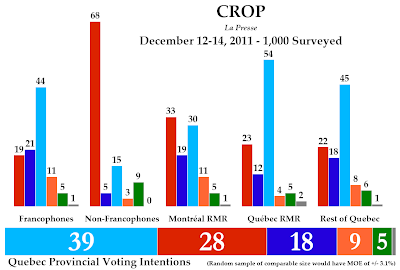 Whereas CROP and Léger found little to disagree upon at the federal level, provincially it is a different situation.

Which is true? That is a bit of an unknown at the moment.

For CROP, however, the CAQ has gained six points since November and now leads with 39%. The Liberals follow with 28% (+1) while the Parti Québécois is well behind at 18% (-1). The big difference between CROP and Léger seems to be that the ADQ's voters went en masse to the CAQ in CROP polling, while they split among the three main parties according to Léger.

Québec Solidaire is up three points since November to 9%.

The Liberals still lead among non-francophones with 68%, as well as in the Montreal region with 33% to the CAQ's 30%.

That Liberal support in Montreal is concentrated on the island, however. According to CROP, the Liberals have 36% support on the island to the CAQ's 26%, while in the suburban areas the CAQ leads with 36% to 30%.

Why? According to the cross-tabs, only 46% of the CAQ's voter pool supports the NDP. They draw 25% of their support from Conservative voters and 14% from Bloc Québécois voters. Only 7% of their voters support the Liberals, meaning that the CAQ's support is not as uniform as it might be. Instead, it is more NDP/CPC and less LPC/BQ than the average Quebecer.

And this is why I don't agree with the La Presse report saying that the CAQ would win 100 seats. Instead, my model shows them winning 65 seats with this level of support - a majority but nowhere near a landslide. The Liberals win 45 seats and the Parti Québécois only 12, with Québec Solidaire winning three. Recall that the model is using the current electoral boundaries, not the ones that will come into effect early in 2012. As the suburbs of Montreal are gaining the extra seats, we could bump up the CAQ a couple at the expense of the PQ/PLQ.

But on the older map, the CAQ wins 17 seats in Quebec City, 15 in Montérégie, 14 in western Quebec, 13 in central Quebec, six in eastern Quebec, and none in Montreal or Laval. That is their major problem - they do not seem poised to win in Montreal.

Or do they? With a ten-point spread between the PLQ and CAQ on the island of Montreal, that means the CAQ could potentially win some seats in the francophone parts of the island as the Liberals are running up the numbers in the western parts. The projection model is not yet designed to go into this level of detail, but it will before the next election. Nevertheless, the sample sizes begin to get quite small at these levels.

The Liberals win 26 seats in Montreal and Laval, seven in western Quebec (primarily along the Ottawa River), four in Montérégie, three in central Quebec, three in eastern Quebec (the Gaspésie), and two in Quebec City.

The PQ wins six seats in eastern Quebec, four in Montreal and Laval, and two in western Quebec.

The three QS seats are won in Montreal.

But the potential for a bigger win for François Legault exists. Of the 12 seats projected to go to the PQ, seven of them are extremely close CAQ/PQ races. Close enough that in some cases we are talking about less than 1%. If a few PQ MNAs decide not to run again or the CAQ puts up some good candidates, these seven seats could easily go to the CAQ, bumping them up to 72 seats and the PQ down to only five.

There are a few close CAQ/PLQ seats as well, making the potential for the Liberals to win fewer than 40 seats and the CAQ more than 80 relatively significant. But I don't see 100 seats for the CAQ happening just yet, particularly when there are fewer than 100 seats outside the island of Montreal. Even if the CAQ manages to steal half-a-dozen seats in Montreal, they would still need to run the table in the rest of the province. I simply don't see Legault winning everything from Abitibi to the Outaouais to the Saguenay to the Gaspésie on a right-of-centre platform.
Posted by Éric at 12:44:00 PM