Before getting to last night's results in Bonaventure, I invite you to take a look at my article at The Huffington Post Canada on Sunday's NDP debate.

Normally, Bonaventure does not showcase gripping electoral races. Nathalie Normandeau and Gérard D. Lévesque were both long-time and popular local MNAs, and the riding is solidly in the Liberal camp. But with Jean Charest's numbers tanking, Pauline Marois's doing worse, and the emergence of François Legault's CAQ, all eyes were on the by-election. RDI, Quebec's equivalent of CBC News Network, kept a running tally of the votes as they were coming in.

To many, this election was a test of Marois's leadership, which is already on the rocks. She could have lowered the stakes in Bonaventure, but instead she spent a lot of the campaign beside her candidate, Sylvain Roy. This made it personal. And the results are in the uncertain gray area of not good enough, but not bad enough to topple her. 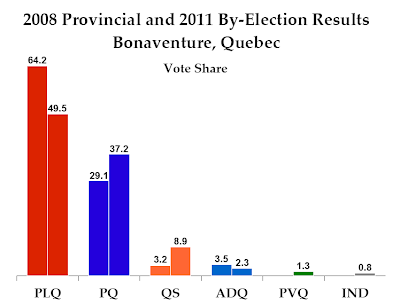 This first chart compares the vote share of the parties in the 2008 general election and last night's by-election, with the 2008 result on the left and the 2011 result on the right.

As you can see, it was a much closer race between the Liberals and the PQ. The Liberals dropped 14.7 points to below the 50% threshold, while the PQ picked up 8.1 points.

Legault's CAQ did not present a candidate. Marois said that had he done so, the federalist vote would have split and the PQ would have won. I'm not sure I agree, as the last poll from Segma (which turned out to be very close to the result) showed that the CAQ would take more support away from the PQ than it would the Liberals.

The ADQ dropped 1.2 points while the Greens did not run a candidate in 2008.

Québec Solidaire improved its score dramatically, picking up 5.7 points to go from 3.2% to 8.9%. Bonaventure is part of the federal riding that elected an NDP MP in May, so this may not be surprising. Patricia Chartier, the QS candidate, even works for the federal NDP. But that QS can do as well as this in a rural riding is a good sign for them. Their generally decent poll results, at least compared to their election results, seem to be for real.

I don't think the PQ was ever in the running to take this riding. If the Parti Québécois was more popular at the moment this Liberal fortress could have easily fallen as Charest is extremely unpopular. It happened last year in Kamouraska-Témiscouata. But Marois's troubles always made a PQ victory here unlikely.

This puts her in a gray area. There was some talk that after being defeated in Bonaventure a whole swathe of PQ MNAs would resign from caucus. If the PQ had gotten over the 40% threshold I would have thought that Bonaventure would have been an unmistakeable moral victory for the PQ and Marois. Below 35% would have been only a few ticks better than 2008 and so would have sunk her. But at 37%, Marois neither did badly enough to force her opponents within the party to act nor did she do well enough to shut them up completely. 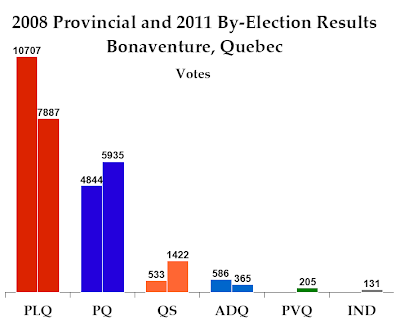 Turnout in Bonaventure was actually quite good for a by-election: 54.6%. Accordingly, there were only 725 fewer valid ballots cast in the by-election than there was in the last general election in the riding. This makes it easy to compare total votes.

The difficulty for Charest to claim anything but a disappointing victory is clear. Damien Arsenault, the new MNA for the riding, took 2,820 fewer votes than did Normandeau only three years ago.

The Parti Québécois gained 1,091, a modest but positive amount, while Québec Solidaire almost tripled their vote haul, going from 533 to 1,422.

The only winner from last night's vote is, in my view, Québec Solidaire. They increased their support by a significant amount in the kind of riding that isn't supposed to be fertile territory for QS. Had this by-election taken place in central or eastern Montreal, we might have easily seen a second QS MNA elected.

Both the Liberals and the PQ can't take too much from last night's vote. The Liberals won, yes, but they were always supposed to win. Their vote dropped significantly, and had the CAQ been in the race it would have dropped even more. For the PQ, it was a good showing but not nearly as good as it should have been if Pauline Marois really isn't the problem. To have the party leader in the riding for much of the campaign during the tenure of a supremely unpopular government and for the PQ to only gain eight points is not much to boast about. But at the same time, it is not a step backwards.

The big loser then, has to be the ADQ. The ADQ took fewer votes from a slightly smaller pool. While this isn't a mark against the CAQ, which is in talks for a merger with the ADQ, it certainly doesn't give Gérard Deltell a lot of bargaining power. A merger now more easily becomes a takeover.

The Bonaventure by-election was probably not going to be a decisive moment in Quebec's politics. The next 24 hours could prove me wrong, but it appears that things are still in limbo for the time being.
Posted by Éric at 9:04:00 AM