NDP support collapses in Quebec without Layton - or does it?

With an election years away, polls provide a reflection of what Canadians are thinking but have little bearing on what happens in the House of Commons. Unlike the seven years that preceded the May federal election, the country is not on the brink of a new election with every passing season.

But even with the next vote far beyond the horizon, a poll can have a real impact on the political landscape.

Check out the article for my thoughts on the implications of the poll, but before you do let's look at the numbers of this new Harris-Decima survey. 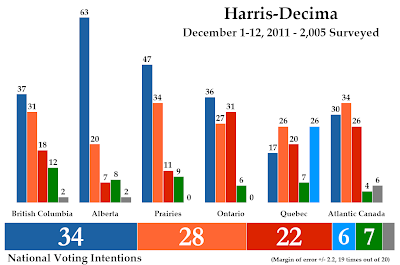 Their last poll was taken between October 27 and November 6, and there has been very little national change since then: the Conservatives are down two points to 34%, the New Democrats are down one point to 28%, and the Liberals are unchanged at 22%. All variations within the margin of error.

But in Ontario and Quebec some interesting things come out of this poll.

In Ontario, the Tories are down two to 36% and the Liberals are also down two to 31%, but the NDP is up six points to 27%. This gain is an important one because the party has lost so much support in Quebec.

There, the NDP is down 10 points to 26%, tied with the Bloc Québécois (up six points). The Liberals are up two to 20% and the Conservatives are down one to 17%. It's a very crowded field.

But is the NDP really down to 26%? Harris-Decima surveys 2,000 people over two weeks so the sample in Quebec is likely some 500 people, so not a horrible number. But CROP has a new poll out today maintaining the NDP at 36% - so is Harris-Decima just an outlier? I suppose we'll find out after a few more polls come out.

In British Columbia the Conservatives and Liberals are each up two points to 37% and 18% respectively, while the NDP is down five to 31%. 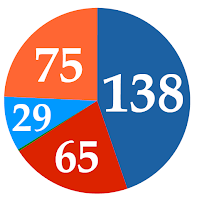 Now for something completely different - with these numbers we are looking at a very divided parliament, reminiscent of what we were familiar year with for most of the seven years before the last election.

The Conservatives win 138 seats, the New Democrats win 75, the Liberals win 65, the Bloc Québécois wins 29, and the Greens win one seat. The NDP remains the Official Opposition but the Liberals make big gains and the Bloc returns to prominence in Quebec.

The Conservatives win 18 seats in British Columbia, 27 in Alberta, 20 in the Prairies, 50 in Ontario, 11 in Quebec, 11 in Atlantic Canada, and one in the north.

The New Democrats win 13 seats in British Columbia, one in Alberta, seven in the Prairies, 24 in Ontario, 20 in Quebec, nine in Atlantic Canada, and one in the north.

The Liberals win four seats in British Columbia, one in the Prairies, 32 in Ontario, 15 in Quebec, 12 in Atlantic Canada, and one in the north.

So, the most important change is, of course, in Quebec. The Bloc goes from four to 29 seats while the NDP goes from 59 to only 20. Even the Liberals make big gains, all in and around Montreal.

It is worth noting where the New Democrats make their retreat. They still win seats in western Quebec and a good deal of seats in the Montreal region and between Montreal and Quebec City (Mauricie, Estrie, Montérégie), but they are pushed completely out of eastern Quebec and keep only one seat in the Quebec City region. The Tories return to Quebec City in force and win a few seats in eastern Quebec, while the Bloc takes seats in every part of the province.

It makes for a messy political landscape in Quebec - Montreal is Liberal, the western half of Quebec is NDP, the eastern half is more Conservative, and the Bloc has seats here and there throughout.

Of course, it'll probably be completely different by the time 2015 rolls around. But it is interesting to see how quickly the political waters in Quebec have been muddied.
Posted by Éric at 9:53:00 AM