With an election almost four years away, the stakes are low. But are the Liberals really back in second place?

You can read the rest of the article on The Huffington Post Canada site here.

Nanos released a new poll earlier this week. Putting the Liberals in second place ahead of the New Democrats, it got some attention. 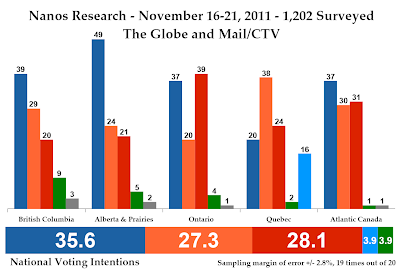 Nanos was last in the field October 20-24, and since then the Conservatives have dropped 2.1 points. They stand at 35.6% in this poll, a level of support the party was very familiar with for the year prior to the May 2011 election.

The Bloc Québécois and Greens are at 3.9% apiece.

The most interesting result is in Ontario, where the Liberals are up 8.3 points to 38.8%. The Conservatives are down 5.2 points to 37.2%, while the NDP is down 2.9 points to 19.6%. This is a remarkable result for the Liberals, but it is difficult to attribute this to the Ontario election. The big jump in Liberal support has come since that late October poll, which was done well after the provincial vote. There could be a bit of delay, but it doesn't seem to explain away all of this increase. It appears that Ontario is reverting to its pre-2011 status of the Liberals and Tories neck-and-neck and the NDP at 20% or lower. An Ontario-based NDP leader like Brian Topp, Peggy Nash, or Paul Dewar might help in that department.

In Quebec, Nanos confirms what four others polls have shown: the NDP is below 40%. They've dropped 7.4 points to 37.7%, while the Liberals are up 5.4 points to 23.6%. That is a much higher result than other polls have shown. The Conservatives are up five points to 20.1% while the Bloc is up 0.7 points to 15.9%. Nanos continues to be the only pollster showing the Bloc at such a low level of support. 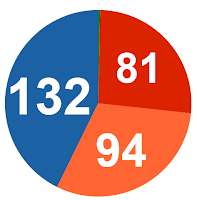 In the 308-seat House of Commons, the Conservatives win 132 seats with these poll numbers. The New Democrats take 94 seats and the Liberals 81, with one seat going to the Greens in British Columbia.

The Conservatives win 20 seats in British Columbia, 25 in Alberta, 17 in the Prairies, 46 in Ontario, nine in Quebec, 14 in Atlantic Canada, and one in the north.

The New Democrats win 11 seats in British Columbia, one in Alberta, six in the Prairies, 17 in Ontario, 52 in Quebec, six in Atlantic Canada and one in the north.

The Liberals win four seats in British Columbia, two in Alberta, five in the Prairies, 43 in Ontario, 14 in Quebec, 12 in Atlantic Canada, and one in the north.

Nanos doesn't separate Alberta from the two other Prairie provinces like every other pollster does. Because of this, I need to separate the results myself, and doing so with this poll gives the Conservatives 52% and the Liberals 18% in Alberta. This means a drop of more than 1/5th for the Tories and a doubling of Liberal support. With that happening, the Liberals gain Calgary Northeast and Edmonton Centre.

Do I think this would actually happen? No. But that is what the numbers show. Double the support of the Liberals and drop the Tories by almost one quarter, and, surprise surprise, the Conservatives don't sweep everything but Edmonton-Strathcona.

With a 338-seat House of Commons, a quick estimate gives the Conservatives 148 seats, the New Democrats 100 seats, and the Liberals 89, with the Greens still winning one.

This is only one poll, and there isn't enough information yet to say that the Liberals have definitely moved into second place, or even whether they are in a tight race with the NDP. Yes, the next election is almost four years away and, yes, the NDP has no leader, but this poll is what it is. What it suggests is that the Liberals are not dead and do have potential to make a comeback, while the Conservative lead is quite wobbly.
Posted by Éric at 12:18:00 PM