Three to five months out, Redford on track

The next province heading to the polls looks set to continue the winning streak for incumbent governments.

But as in Manitoba and Newfoundland and Labrador, the incumbent party will be led by a new leader who represents both change and continuity.

Alberta's Premier Alison Redford was named leader of the Progressive Conservatives in October. Before the leadership campaign had started, the Alberta Tories were bleeding support away to Danielle Smith’s Wildrose Party, and an end to the uninterrupted period of PC rule stretching back to 1971 seemed possible.

But the leadership campaign itself rejuvenated the party and under Redford's leadership the Tories are on track to win another majority government in the province.

It'll sneak up on us, but the Alberta election might be as near as three months away! I think it might be sneaking up on Albertans, too, as Alison Redford looks like she'll win another majority without any problem. 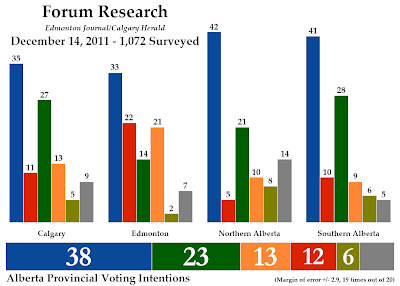 This is Forum's first foray into the Alberta scene. They have the Progressive Conservatives leading with 38%, well ahead of Wildrose at 23%.

The New Democrats and Liberals trail with 13% and 12% apiece, while the Alberta Party stands at 6%.

Unfortunately, the number for the "other" parties is huge: 9%. If we take that out and distribute the 9% to the other parties proportionately, we get 42% for the PCs and 25% for Wildrose.

That is a solid lead for the Tories, though not completely comfortable for the PCs. However, with the Liberals so low the Tories will likely be able to pick-up a lot of new seats, even if Wildrose does steal a dozen or more from them.

Calgary, however, will be a bit of a battlefield. The Tories lead with 35% to 27% for Wildrose (or 38% to 30% without all the others), while in Edmonton the battlefield is for second. The Progressive Conservatives have the edge with 33%, but the Liberals (22%) and New Democrats (21%) are very much in the race. However, that is quite a drop for the Liberals, meaning they will be hard-pressed to hold on to their seats.

In northern Alberta, the Tories lead with 42% (49% without the Others), well ahead of Wildrose. Southern Alberta is a bit closer, with the Progressive Conservatives at 41% to 28% for Wildrose. 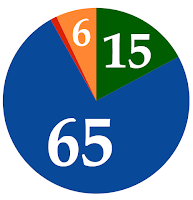 The projection model for Alberta is not yet complete, so for now I am using a simple swing model at the provincial level based primarily on the old boundaries. With that model and these poll numbers, the Progressive Conservatives win 65 seats and an easy majority.

Wildrose wins 15 seats and forms the Official Opposition while the New Democrats win six seats and become the third party in the legislature. The Liberals are reduced to a single seat.

Before the election rolls around, and according to this poll 68% of respondents approve of having fixed election dates (or, at least in this case, fixed election seasons), I'll have the new projection model up and running. It will be quite a departure from what I've used in the past. It'll be regionally based and, if I have the time, sub-regionally based as well. I don't imagine that there will be many, if any, riding polls for Alberta but the model will be designed to be able to incorporate them. The vote projection will also be different, in that it will attempt to estimate how the polls will be off, rather than only averaging them out with a weighting.

It will be an interesting race. Alison Redford, Danielle Smith, and Raj Sherman will all be leading their parties into a general election for the first time - that means that, more than usual, anything might happen.
Posted by Éric at 9:28:00 AM