Last week, the Corporate Research Associates released their quarterly poll for the four Atlantic provinces. The details of the polls for Prince Edward Island, New Brunswick, and Newfoundland and Labrador are available at their website. As all of these provinces are many years away from the next election, I invite you to check out the polls directly.

But before you do, let's take a look at the results for Nova Scotia, where the next election is scheduled for 2013. 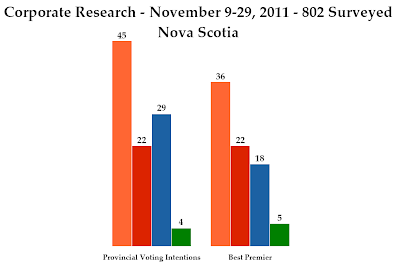 Darrell Dexter's New Democrats have gained four points since CRA's last poll in August, and now lead with 45%. That is the highest that they have been in at least a year.

The Progressive Conservatives are down one point to 29%, while the Liberals are down four points to 22%.

The Greens are unchanged at 4% support.

For Dexter, this is the kind of support he enjoyed in the 2009 election. But the Liberals have been losing ground, primarily to the Tories. The Liberals had beaten the PCs by about 27% to 25% in that last election.

Dexter's numbers are very good, as 55% of Nova Scotians are satisfied with his work as Premier. That's up six points since August.

He is also doing quite well in the Best Premier poll, at 36% (up five points since August). Stephen McNeil of the Liberals is down one point to 22% while Jamie Baillie of the Tories is up one point to 18%.

McNeil is probably ahead of Baillie because he is better known. He led the Liberals in the last election, while Baillie took over from Rodney MacDonald last year.

Though Dexter's personal support is lower than his support among decided voters, that is merely because of the inclusion of the "none of the above/don't know". If we took those out, Dexter gets 44% on the Best Premier question. 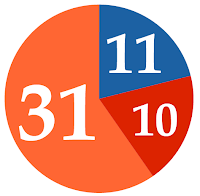 A new riding model for Nova Scotia is now ready, though it isn't a regional model just yet. As CRA doesn't break down their polls by region, at least not until a campaign is under way, a regional model would not make any difference at this point.

The New Democrats dominate the Halifax region with 15 seats. The Liberals take the three others.

In the Annapolis Valley and the South Shore, the NDP win seven seats, the Liberals four, and the Progressive Conservatives three, while in the Fundy and Central regions the NDP wins seven and the Tories four. Cape Breton Island is most split, with four seats going to the PCs, three to the Liberals, and two to the NDP.

The New Democrats are about half-way through their first mandate in Nova Scotia, and it appears to be smooth sailing. At this point, it looks like Darrell Dexter is on track to avoid being a one-term premier.
Posted by Éric at 9:55:00 AM