Conservatives up in Abacus poll despite troubles

Despite Peter MacKay’s helicopter ride, admitting to spreading false rumours of an impending resignation of an MP in Montreal and the troubles in Attawapiskat, the Conservatives still hold a comfortable nine-point lead over the opposition New Democrats, according to a poll released this week by Abacus Data.

The online survey was taken between December 2 and December 4 in the midst of these developing stories. Yet, compared to Abacus’s last poll dating from mid-August, before the death of Jack Layton, the Conservatives are up two points to 40 per cent support.

For my full analysis of the poll, check out the article. In the meantime, here are the details: 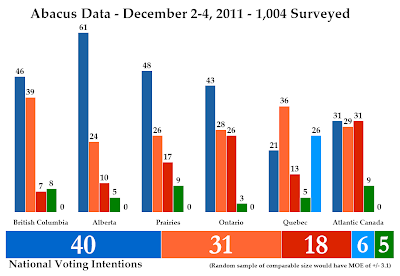 As you can see, things haven't changed too much since the last election in May. And, from Abacus's perspective, there hasn't been much change from August. The biggest national shift has been the two point gain for the Conservatives.

As you can see, I've made a few minor stylistic changes to the graphics as well. 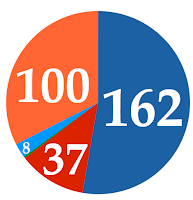 This Abacus poll would not deliver a very different House of Commons. The Conservatives win 162 seats with these numbers, while the New Democrats win 100 seats and the Liberals win 37 seats. The Bloc Québécois doubles its caucus and wins eight seats while the Greens take one.

The Conservatives win 20 seats in British Columbia, 26 in Alberta, 23 in the Prairies, 70 in Ontario, 11 in Quebec, 10 in Atlantic Canada, and two in the north.

The New Democrats win 15 seats in British Columbia, two in Alberta, two in the Prairies, 23 in Ontario, 51 in Quebec, six in Atlantic Canada, and one in the north.

The Liberals win no seats in British Columbia or Alberta, three in the Prairies, 13 in Ontario, five in Quebec, 16 in Atlantic Canada, and none in the north.

There are also a number of seats in Quebec that are on the bubble between the NDP and the Bloc Québécois, so it is possible that the Bloc could manage official party status with these numbers.

Steady as she goes, though, for the most part. A bit of a tighter race in Quebec and British Columbia looks interesting, but this is generally what we saw on election night.
Posted by Éric at 11:22:00 AM