Unless Jean Charest jumps the gun, and he even has the option to wait until the end of 2013, the next province to go to the polls will be Alberta. Under new leader Alison Redford, the Progressive Conservatives will be launching the next election campaign sometime between March and May of next year. Though the PCs hold a comfortable lead, it should be an interesting race.

ThinkHQ Public Affairs is out with a new poll today for the Calgary Herald, unfortunately bereft of voting intentions numbers. But in the increasingly leader-led Canadian political landscape the approval ratings of the leaders of the four major Alberta parties is perhaps just as useful. 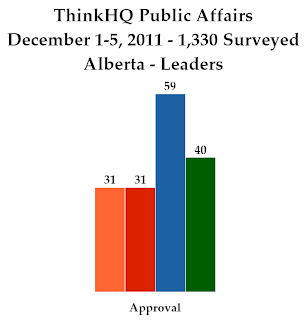 She's had the job for a few months now, so while Alison Redford's honeymoon with Alberta's voters might still be underway, she has been around long enough for most Albertans to form an opinion about her. And, so far, that opinion is good: she enjoys a 59% approval rating, which bodes well for her party's chances in the next election.

Danielle Smith, leader of the Wildrose Party, has an approval rating of 40%. It isn't enough to compare with Redford, but it does look like Wildrose is on course to form the Official Opposition in the province.

Raj Sherman, leader of the Liberals, and Brian Mason, leader of the New Democrats, each have an approval rating of 31%. The two parties will be fighting it out for third spot unless Wildrose falters. The NDP seems to have a better concentration of support in Edmonton and so could come out on top and ahead of the Liberals in the spring.

In terms of the government's approval rating, Redford has bumped it up from 36% in September to 45%. She has also lowered its disapproval rating from 55% to 48%. Those are still negative net numbers, and Albertans seem to have a problem with the waste in the government's spending (an important theme for Smith), but Redford is certainly heading in the right direction.

The spring election may just coincide with the end of her honeymoon with the province, or it might carry on long enough to give her a mandate of her own. But there is still a lot up in the air - Wildrose led the PCs for a brief period two years ago and if Redford stumbles on the campaign trail Danielle Smith may be able to take advantage once again. And then there is the fate of the New Democrats, who seem to be on the upswing, and that of the Liberals, who seem to be on the decline. Though a PC victory is likely a safe bet in Alberta, the race will nevertheless have its charm.
Posted by Éric at 10:19:00 AM