CAQ on track for minority in three-way race

Last week, François Rebello crossed the floor from the Parti Québécois to the Coalition Avenir Québec. Though François Legault gained a new MNA, picking up another member of the PQ might have actually hurt his levels of support in the province.

What are Rebello's chances of being re-elected now that he has crossed the floor? Check out my article today on The Globe and Mail's website on federal floor crossers here. The news is mixed for Lise St-Denis, who last week left the New Democrats for the Liberals. 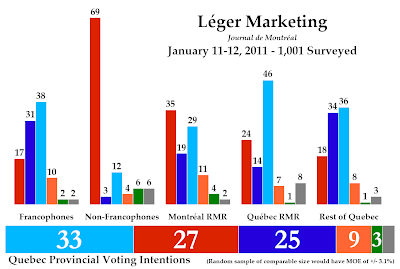 Léger Marketing released a new poll over the weekend for the Journal de Montréal, taken January 11-12 and so shortly after Rebello's defection to the CAQ. The result is that the party has slipped four points since mid-December to 33%.

The Liberals have benefited with a gain of five points, and now trail with 27%. The Parti Québécois, meanwhile, is up one point to 25%.

Québec Solidaire is unchanged at 9% while the Greens have 3% support. Other parties, which would seem to include Jean-Martin Aussant's Option Nationale, also have 3% support.

The Liberals have gained eight points in the Montreal RMR and now lead with 35%. The CAQ has dropped two points to 29%, while the PQ is down another two points to only 19% support. At 11%, QS is closer to the PQ than the CAQ is.

In the Quebec City RMR, the CAQ is up three points to 46%. They really dominate the capital. The Liberals are up two points to 24%, while the PQ is down six points to 14%.

Among francophones, the PQ is up three points to 31% while the CAQ is down four points to 38%. The Liberals are up one point to 17%. 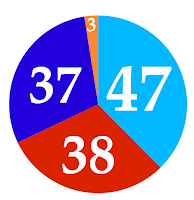 With these levels of regional support (but not yet using the new electoral boundaries), the CAQ would win 47 seats, far short of the 63 needed to form a majority government. The Liberals win 38 seats and the Parti Québécois 37, a margin too close to say with any great degree of confidence who would form the Official Opposition.

Québec Solidaire would win three seats, all of them on the island of Montreal.

The CAQ wins 16 seats around Montreal, eight in the Quebec City RMR, and 23 in the rest of Quebec. Broken down more specifically, the CAQ wins 10 seats in western Quebec, two in eastern Quebec, 15 in and around Quebec City, 10 in central Quebec, none in Montreal and Laval, and 10 in Montérégie.

If we look at which party wins each specific region of Quebec, we see a definite pattern. The CAQ wins Quebec City, the suburbs of Montreal, and the area between the two cities. In all, they win Lanaudière, Laurentides, Capitale-Nationale, Chaudière-Appalaches, Mauricie-Bois-Frances, and Montérégie. These are all relatively well-off, francophone regions that voted for the ADQ in 2007.

The PQ, on the other hand, wins Abitibi-Témiscamingue, Côte-Nord, Gaspésie, and the Saguenay-Lac-Saint-Jean. These are relatively less well-off francophone regions that have long supported the PQ.

That leaves the affluent, more anglophone, and federalist regions of Quebec to the Liberals: Montreal, Laval, and the Outaouais.

The Bas-Saint-Laurent and Estrie are split evenly between the CAQ and the PQ.

With the francophone vote so close between the CAQ and the PQ and the Parti Québécois looking good in the regions of Quebec, the election would be between those two parties outside of the major centres. In the major centres, the Liberals dominate Montreal while the CAQ dominates Montreal's suburbs and Quebec City. In other words, a three-pronged campaign.

It is interesting to note that support for sovereignty was up in January to 43%, well above the combined 34% support that the Parti Québécois and Québec Solidaire enjoys. This is because, according to the Léger poll, about one-third of CAQ supporters are also sovereigntists.

Quebec continues to become more and more interesting - à suivre.
Posted by Éric at 10:10:00 AM