Dewar closes in on front-runners

In this week's NDP leadership endorsement rankings update, Paul Dewar makes a big leap forward with important endorsements out of Ontario and Manitoba. Thomas Mulcair also lands a few endorsements from both ends of the country. 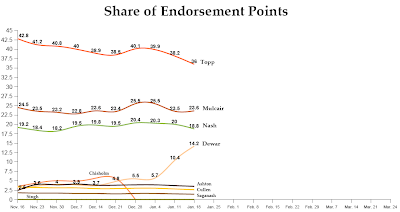 But it was Dewar who made the biggest news this past week, thanks to the endorsement of Charlie Angus, four-term MP for Timmins-James Bay. Angus is one of the more well-known MPs in the NDP caucus and has been representing his riding since 2004. His endorsement awards Dewar ten points, but more importantly increases his caucus support to two MPs, both of them important figures in the party. Angus also helps Dewar in the all-important province of Ontario, joining former MP Tony Martin, current MPP Rosario Marchese, a couple labour unions and former Ontario NDP leader Mike Cassidy as supporters from within the Ontario wing of the party.

Mike Cassidy was the other important endorsement that Dewar picked up this week. Cassidy led the Ontario NDP from 1979 to 1982 and was MPP and then MP for Ottawa Centre from 1971 to 1988. This endorsements gives Dewar an extra 12 points, and is a good representation of the support Dewar should be able to call upon in some quarters of Ontario.

But Dewar did not stop there, he also announced the endorsement of three Manitoba MLAs: Andrew Swan, Deanne Crothers, and Matt Wiebe. This brings his total of endorsements from the Manitoba NDP to 13, more than a third of the province's NDP legislators. These three endorsements give him an extra 1.5 points.

In total, that bumps Paul Dewar up 23.5 points to 75.8 endorsement points, or 14.2% of all available endorsement points. That is a 3.8 percentage point gain since last week. He is now nipping at the heels of Peggy Nash.

Thomas Mulcair's most important endorsement from this past week comes from Don Davies, two-term MP from Vancouver-Kingsway. Mulcair already has the support of a few MLAs from British Columbia, but this is the first caucus support Mulcair has received from the province, home to a large proportion of the NDP's members. Davies's endorsement gives Mulcair an extra five points.

Mulcair also announced the endorsement of two northern Ontario figures, former MPP Elie Martel and former MP for Thunder Bay-Nipigon Ernie Epp. As former provincial legislators are not counted in the system, Mulcair gains two points from Epp's endorsement only. Nevertheless, the two of them give Mulcair more support in the northern part of the province, adding to the endorsement of MP John Rafferty.

Lastly, after getting the support of Herb Dickieson, former leader of the PEI NDP, Mulcair this week received only the second endorsement to come out of Atlantic Canada since Robert Chisholm, Nova Scotia MP and former head of the party in that province, dropped out of the race. Mulcair received the support of the PEI Federation of Labour, an organization the size of which I have been unable to discover. I've assumed that it is of similar size to that of the Manitoba Federation of Labour, proportionately speaking, so I've awarded Mulcair an extra 0.6 points on the assumption that the union represents some 10,000 Islanders.

In all, that gives Mulcair an extra 7.6 points in the endorsement rankings. Normally that would not be a bad week's work, but compared to Dewar's score it is relatively small. It does keep him treading water, however, as he has managed to gain 0.1 percentage points. He now has 125.9 points, or 23.6% of all available endorsement points.

That is important, as with a lack of endorsements coming out of any other camp the other candidates have all taken a step backwards in their share of endorsement points. Brian Topp is down 2.2 points to 36% and Nash is down 1.2 points to 18.8%. Niki Ashton (-0.2%), Nathan Cullen (-0.2%), and Roméo Saganash (-0.1%) have all dropped a little as well.

Paul Dewar is certainly on a roll, picking up major endorsements in the last few weeks. But both Brian Topp and Thomas Mulcair have tried to hold their own with endorsements of their own. Peggy Nash, at least in the endorsement race, appears to be falling behind.

Caucus support tells a somewhat different story, however. Mulcair has the largest crop of MPs behind him with 35, not including himself, giving him 39 election wins' worth of support. Topp comes up second with 11 MPs supporting him totaling 25 terms. Then it drops off by a huge extent.

Peggy Nash has six MPs behind her with a total of eight terms in office, while Paul Dewar has only two MPs supporting him, totaling six terms in office. But Niki Ashton (three MPs, three terms) and Roméo Saganash (two MPs, two terms) are in the same league in terms of caucus support. That tells us that, at least at this stage of the race, within the NDP caucus it is Thomas Mulcair and Brian Topp who are the real front-runners. On this score, Nash and Dewar have a long way to go.

However, it doesn't always go according to the whims of the caucus. Jack Layton and Adrian Dix did not win the leadership of their respective parties with more caucus support than their rivals. On the other hand, Greg Selinger and Andrea Horwath did.

There's a lot of campaigning still to go, and the Dewar camp has already hinted that they have some endorsements coming out of Quebec soon. And with the debates now starting to roll, things should begin to shake loose.
Posted by Éric at 9:10:00 AM