The NDP leadership race is starting to kick into a higher gear, with the next debate to be put on by the party scheduled for this weekend in Halifax. The race is starting to gain a bit of attention as the candidates are beginning to (mildly) differentiate themselves from one another. And in the past week a few major endorsements were handed out. 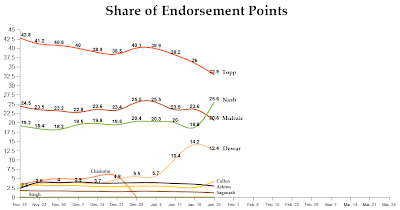 Peggy Nash has, by far, made the biggest gain this past week in the NDP leadership endorsement rankings, thanks to a handful of high profile labour endorsements.

Nash picked up the support of the Federations of Labour of Ontario, Alberta, Nova Scotia, and the Northern Territories for a combined membership of 924,000 people. That is huge, and in addition to the endorsement of the United Steelworkers Toronto Area Council (representing 13,000 people) gives Nash a major 56.2-point bump in the endorsement rankings, propelling her 6.8 percentage points to 25.6% and ahead of Thomas Mulcair. Nash now trails only Brian Topp.

Nathan Cullen also made a splash this week, the first of the second tier of leadership candidates to announce an endorsement in quite some time. Cullen received the support of two British Columbian NDP MPs, Fin Donnelly of New Westminster-Coquitlam and Alex Atamanenko of British Columbia Southern Interior. Donnelly is a two-term MP while Atamanenko is a three-term MP, giving Cullen an additional 12.5 points. He now stands at 4.3% of the total, up 1.7 percentage points. That puts him on top of the second tier, ahead of Niki Ashton.

Brian Topp also picked up a few endorsements from Chris Charlton, three-term MP from Hamilton Mountain, and former MP Bill Siksay. Together, that gives Topp an extra 9.5 points but with Nash's big gain he has still fallen 3.1 percentage points to 32.9% of the total, his lowest of the campaign so far.

Thomas Mulcair obtained only one endorsement this past week from the United Association Local 46, a union of 7,000 plumbers, steamfitters, and welders in the GTA. That gives him an extra 0.4 points, but he has dropped three percentage points to 20.6% and now stands in third behind Topp and Nash.

Without any new endorsements that are recorded by this system, Paul Dewar has fallen 1.8 percentage points to 12.4%, while Ashton is down 0.5 points to 3% and Roméo Saganash is down 0.2 points to 1.2%.

Of course, some of these organizations overlap and not all of them are explicitly affiliated with the New Democratic Party. Nevertheless, Nash does seem to have the support of the labour world.

It's good news for Nathan Cullen that he picked up some caucus support, as his plan for combined NDP/Liberal/Green nominations is controversial within the party. Cullen has yet to receive the support of anyone from outside of British Columbia, however, a province already being mined for endorsements by Brian Topp and Thomas Mulcair, but also Peggy Nash, Paul Dewar, and Niki Ashton. Though he might get a good chunk of the British Columbia membership, he'll need more than that to survive late into voting day.

It appears likely that the first ballot vote will put Topp, Nash, Mulcair, and Dewar all in decent positions. The big question is what happens on the second ballot. At least one candidate will be forced to drop-off but more could as well, potentially throwing their support behind one or two of the other candidates. And if the membership sees that one candidate or another has under-performed expectations, their votes might bleed to one of the others that has emerged as a front-runner. Though a good deal of members will undoubtedly vote via mail, and so already have their second and subsequent choices recorded, the day of the leadership vote could nevertheless be quite interesting.
Posted by Éric at 9:21:00 AM