Liberals up, NDP steady, Tories down

Because the next election is more than three years away, four federal polls were released this week amid the heightened tension that the upcoming vote in 45 months has caused.

In all seriousness, though, this spate of new polls does give us a good idea of where Canadians stand as the 2012 political year starts to get going. The implications of these polls are, of course, relatively minor. But getting a bead on the mindset of Canadians is never a meaningless exercise.

Take a look at my article today on The Huffington Post Canada website here for a shorter overview of these polls, what trends they are showing, and what that might mean.

As we rarely get the chance to look at a series of polls taken over so short a time outside of an election campaign, let's examine these four federal surveys (by Abacus Data, Angus-Reid, Harris-Decima, and CROP) side-by-side. 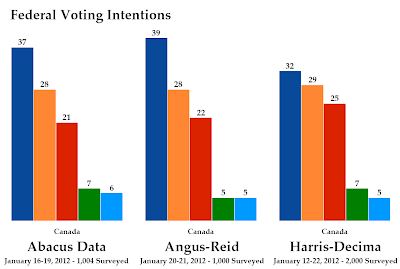 The three Canada-wide polls were taken between January 12 and 22, surveying a total of more than 4,000 Canadians. The dates of the three polls all overlap with one another, except Abacus and Angus. As they both use online panels, that is perhaps a good thing.

Harris-Decima has the Tories down two since their early December report, while the NDP is up one and the Liberals are up three.

Though the Liberals don't exactly have the momentum of a runaway freight train ("Why are you so popular?"), this is a positive trend across the board in their favour. The New Democrats appear to be steady, while the Conservatives appear to be slipping. 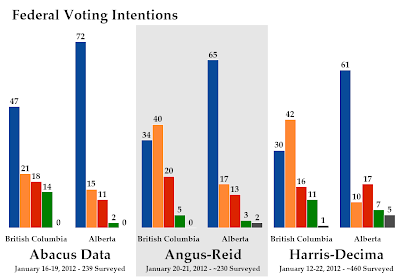 British Columbia, however, is far less clear. The Conservatives ranged between 30% and 47% in the three polls, putting them either 12 points behind the NDP or 26 points ahead. This is what smaller samples can do.

Alberta is a little more cut-and-dry, as usual. The Conservatives lead by between 44 and 57 points, with between 61% and 72% support. The New Democrats stand between 10% and 17% while the Liberals have between 11% and 17% support. This is where it gets a little muddier. Most polls have shown the NDP solidly in second in Alberta, but Harris-Decima shows the Liberals in second. Compared to everything else we've seen, that makes it a small outlier. 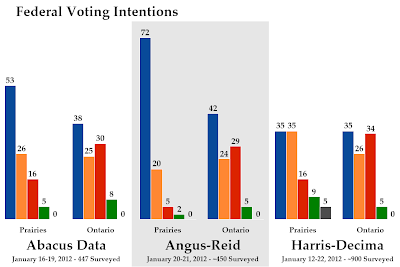 The Prairies pose another problem, but this is not new. Abacus Data shows the usual Conservative lead and relatively strong NDP showing, while Angus-Reid gives the Prairies to the Tories in a walk and Harris-Decima has a neck-and-neck race. Most recent polls have been between the results of Abacus and Harris-Decima, so we have to consider Angus-Reid to be the outsider on this one.

These are important differences. Angus-Reid would give most of Saskatchewan and Manitoba to the Conservatives, while Harris-Decima would actually split the provinces between the NDP and the Tories. This is one of the reasons why I expect Manitoba and particularly Saskatchewan to be more important in 2015 than they have been in a long time. 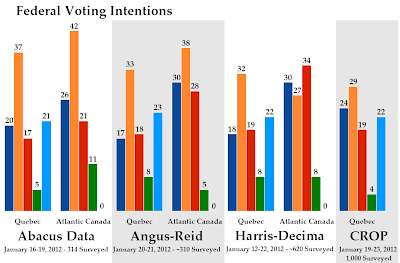 We have a richer set of data in Quebec as CROP also reported this week with a survey of 1,000 Quebecers, at least twice as many as any other poll in the field. CROP also has the most up-to-date data, as it was in the field between January 19 and 23, overlapping with all three other polls but also stretching later than all of them.

Across the board, the New Democrats are leading with between 29% and 37%. Optimists might point to Abacus's 37% result, but the three other polls are far more in line with what the general trend has been since December.

The Bloc Québécois holds second in three of the four polls with between 21% and 23% support, a very tight grouping. The Conservatives have between 17% and 24% support, while the Liberals are also tightly grouped at between 17% and 19%.

In what direction the NDP is heading is difficult to say. Since August, Angus-Reid has the party down seven points. CROP also has them down seven points since their mid-December survey. But Abacus Data has them up one point since December while Harris-Decima has them up six. It would appear that the most likely situation is that the NDP is holding generally steady in the mid-to-low 30s.

The Bloc, however, seems to be slipping. Though Angus-Reid has them up two points since August, the three others that last reported in December have them either holding steady (CROP) or dropping (four points according to Harris-Decima, five according to Abacus). In any case, it does not seem that the Bloc is making any new gains, contrary to what seemed to have been the case in December.

The Conservatives seem to be holding, with no changes larger than two points since December (positive in the case of Harris-Decima and CROP, negative according to Abacus), while the Liberals have made three to four point gains in CROP and Abacus's polling. Harris-Decima has them down one, however.

This all seems to point to a general status quo in Quebec. That is good news for everyone but the Bloc, as the NDP slide seems to have stopped and both the Conservatives and Liberals are polling above the last election's result.

Finally, in Atlantic Canada the New Democrats lead by good margins in two of the three polls, and overall average between 27% and 42%. The Conservatives range between 26% and 30%, while the Liberals stand somewhere between 21% and 34%. With its small sample sizes and tricky three-way race, it is difficult to discern any real trend here. But the NDP has being doing well in the area recently.

Harris-Decima, on the other hand, shows an extremely weak Conservative minority: 118 Conservative seats, 106 New Democrats, 77 Liberals, six Bloc, and one Green. Undoubtedly, this Conservative government would not last very long.

In Alberta, the Conservatives range between 27 and 28 seats, while the New Democrats could win one or none.

The Conservatives win between 12 and 26 seats in the Prairies, with the New Democrats winning between two and 11 and the Liberals between none and five.

In Ontario, the Conservatives range between 48 and 64 seats, the Liberals between 20 and 37 seats, and the NDP between 21 and 22 seats.

In Quebec, the New Democrats range between 39 and 52 seats, the Conservatives between eight and 16 seats, the Liberals between 11 and 13 seats, and the Bloc between four and seven. 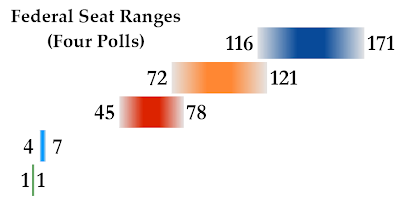 Taken altogether, the Conservatives range between 116 and 171 seats. This means they could win a majority government with these polls, or could even be replaced by the New Democrats, who range between 72 and 121 seats. I only see a 9% chance of an NDP victory, however.

The Liberals range between 45 and 78 seats, meaning they could potentially form the Official Opposition, while the Bloc ranges between four and seven seats. That keeps them out of official party status.

So what do all of these polls tell us? Generally speaking, Canadians haven't moved too much from where they were in May 2011. If they have moved, outside of Quebec it has been from the Conservatives to the Liberals while inside Quebec it has been from the New Democrats to either the Liberals or the Conservatives. Though it is somewhat more complicated than that, as we seem to have the NDP making gains in British Columbia and Atlantic Canada as well, this is what we're seeing.

But overall, the Liberals and NDP can take the most from these polls. The Liberals are showing signs of life, indicating that a future recovery is possible. The New Democrats are showing staying power, indicating that the next leader will not have to play catch-up, at least outside of Quebec. Of course, the Conservatives are still in control. But they have a majority government and are looking less towards 2015 than the other parties. There is nothing to worry them just yet, but the situations in British Columbia, the Prairies, and Ontario point to the potential for problems when Canadians next cast their ballots.
Posted by Éric at 10:13:00 AM