Last night, the New Democrats chose Craig Scott as their candidate for the upcoming by-election in Toronto--Danforth. The by-election date has to be announced before the end of February.

This is the first of what I hope will be many riding histories. Each riding history will stretch back to Confederation, linking former ridings with ridings that exist today. With Toronto--Danforth heading towards a by-election, it seems like the perfect place to start - and Toronto--Danforth's history starts in the riding of Toronto East.

Toronto East did not share all of the geography of today's Toronto--Danforth, but the riding did encompass much of what today makes up the riding. The riding was one of the few in the country where the working class vote was an important one in the 1860s and 1870s, and Toronto East's first MP, James Beaty, was seen as a hero of the working class, despite having a fortune of some $150,000 in 1873 - a huge sum for the time.

Running as a Conservative in 1867, Beaty defeated a Dr. Aikins with 52.2% of the vote. Another candidate, a Mr. Allen, received a single vote (presumably himself).

Beaty was a merchant and newspaper owner, head of the Leader who had no less a figure than George Brown as his prime antagonist. He was born in Kileshandra in Ireland in 1798 and his nephew, born in Upper Canada in 1831 and also named James, went on to be twice elected as MP for Toronto West in 1880 and 1882.

Beaty moved to Toronto in 1818 when the city had a population of only 500, but by the 1870s the city was a major centre with a large working class. The Leader stood on the side of the strikers during one particular work stoppage, and that was undoubtedly a factor in Beaty's success in the 1872 election.

Beaty faced off against John O'Donohue in an election Beaty would call "a hard and bitter fight." He did not stay long in office, however, retiring shortly after Sir John A. MacDonald left office in the wake of the CPR scandal. In an interview after his retirement from politics and business, Beaty said that he was "hopeful that I will be spared to see Toronto become a still greater city than it is at the present."

O'Donohue ran again as a Liberal-Conservative in 1874 and won with 52.8% of the vote against Emerson Coatsworth. It appears that this may have been the father of Emerson Coatsworth Jr., who would win the riding under the Conservative banner in 1891. O'Donohue was another Irish-born MP. He would eventually be appointed to the Senate by MacDonald in 1882.

For some reason, the 1874 election was declared void and in a subsequent by-election in 1875 Samuel Platt, another Irishman, defeated O'Donohue with 58.7% of the vote. Platt was re-elected in 1878, with the records not indicating whether either Platt or his opponent, Ed Galley, belonged to any particular party.

Platt did not re-offer and in 1882 John Small was elected as a Conservative. He would be re-elected in 1887 against the first Liberal candidate on record for the riding.

Emerson Coatsworth then took over for Small in 1891, winning 63.1% of the vote, the most yet seen for any one candidate in this riding. Coatsworth was defeated in 1896 by John R. Robertson, but would eventually go on to be Mayor of Toronto from 1906 to 1907.

Robertson was an Independent Conservative in the 1896 election, but he did not run again in 1900 when Albert E. Kemp, who would be the longest serving MP in the history of Toronto East and its successor ridings down to Toronto--Danforth, was elected. The 1900 election was also the first appearance of a third party on the ballot: Labour.

Kemp was re-elected in 1904 but was defeated by Joseph Russell, an independent, in 1908. Kemp ran again in 1911 and defeated Russell, who would go on to be an MPP for Riverdale in 1914. In Robert Borden's cabinet, Kemp was Minister of Militia and Defence from 1916 to 1917 and Minister of the Overseas Military Forces from 1917 to 1920, Toronto East's first full cabinet minister. Kemp was named to the Senate in 1921 by Arthur Meighen.

Edmond B. Ryckman continued the Conservative dominance of Toronto East in 1921, in an election that featured the first female candidate. Elizabeth Bethune Kiely, "housewife", was the Liberal candidate but received only 52 votes. Perhaps because she was a woman, the Liberal vote instead went to an independent "gentleman" and to the Progressive Party candidate.

Ryckman passed away while in office (sadly, he would not be the first to die in office while representing this riding) and in the by-election of 1934 he was replaced by Thomas L. Church. The Conservative candidate defeated the Liberals with 46.3% of the vote to 37.5%. This by-election is also notable for it being the first appearance of the CCF. The party received 16.3% of the vote.

Church was not a political neophyte, having been Mayor of Toronto from 1915 to 1921 and the MP for Toronto North and Toronto Northwest from 1921 to 1930, when he was defeated. Toronto East gave him the chance to return to the House of Commons.

Church passed away and in the 1950 by-election the Progressive Conservatives returned in force, taking 48.1% of the vote under George Hees. Hees was re-elected four more times and sat as Minister of Transport from 1957 to 1960 and Minister of Trade and Commerce from 1960 to 1963.

But in 1963, Hees lost the riding for the Progressive Conservatives to the Liberal candidate, D.G. Hahn. Aside from the election of a few independents prior to the First World War, this was the first time that Broadview/Toronto East was not represented by a Conservative. Hahn took 40.9% of the vote to Hees' 31.3%, while the NDP's John Gilbert took 26.1% of the vote. Hees did not leave politics, however, being elected seven more times as MP for Northumberland and Prince Edward Hastings. He would eventually receive the Order of Canada.

Hahn did not stay in office long, however, being defeated by the NDP's Gilbert in 1965. From this point on, the riding would forever be a contest between the Liberals and the NDP. Gilbert won with 39.7% of the vote. Gilbert would be re-elected three more times, always taking between 40% and 42% of ballots cast. He resigned in 1978, and Bob Rae was elected under the NDP banner in a by-election held that year. It was a close race, with the PC's Tom Clifford losing by only 420 votes. Rae would be re-elected in 1979 and 1980, keeping the NDP's support at the 40% or so it held steady at from 1965 through to 1984.

Rae resigned from office to become the leader of the Ontario NDP. He was Official Opposition Leader in the Legislative Assembly from 1987 to 1990 and Premier from 1990 to 1995. He is now, of course, interim leader of the Liberal Party and MP for Toronto Centre.

By 1979, Broadview had been incorporated into a new riding called Broadview--Greenwood. In the by-election of 1982 following Rae's resignation, Lynn McDonald was elected for the NDP with 39.1% of the vote. She faced stiff competition from independent candidate Peter Worthington, then editor of the Toronto Sun and today still a columnist for that newspaper. Worthington had tried to capture the Tory nomination but had failed. He would eventually get that nomination and run again in 1984 for the Tories, when he was again defeated by McDonald. That election, in which the Tories took 34.7% of the vote, was the last in which the party was a real factor in this riding.

Broadview--Greenwood elected a Liberal for only the second time in its history in 1988, when Dennis Mills narrowly defeated McDonald. Mills was re-elected in 1993 with 61.1% of the vote, the best the Liberals have ever done in this riding, and again in 1997 and 2000. In the 1997 election, however, he was tested by the NDP's Jack Layton.

Layton was re-elected in 2006 and 2008 with 48.4% and 44.8% of the vote, respectively, before winning with 60.8% of the vote in 2011, the best performance by an NDP/CCF candidate in the riding's history. Layton was, of course, leader of the New Democrats from 2003 until his passing in 2011, when he was briefly Leader of the Opposition. Layton's wife, Olivia Chow, is currently the MP for Trinity--Spadina while his father, Robert Layton, was the MP for Lachine and Lachine--Lac-Saint-Louis from 1984 until 1993. His great-great-uncle William Henry Steeves was named a senator in 1867.

UPDATE (20/03/12): The by-election to replace Jack Layton was won by NDP candidate Craig Scott with 59.4% of the vote. Scott Gordon, the Liberal candidate, placed second with 28.5% of the vote. 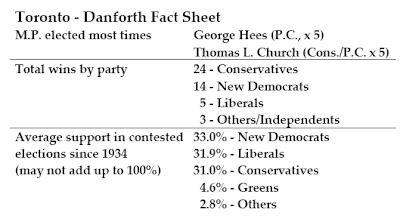 Toronto--Danforth and its predecessors has had its fair share of stellar MPs, including cabinet ministers, mayors, party leaders, senators, and premiers. George Hees and Thomas L. Church were elected most often in the riding, with five elections each to their names. Undoubtedly, Jack Layton would have tied them in 2015.

UPDATE (20/03/12): Since 1934, when the CCF first appeared, the New Democrats (including the CCF) have averaged the highest share of the vote with 33% in contested elections. The Liberals come a close second with 31.9%, while the Conservatives (including the PCs, Reform, and Canadian Alliance) have averaged 31% of the vote. It has been a three-way race over the last 78 years primarily because each party has had its turn in the sun: the Conservatives for the first 100 years, the Liberals under Mills, and the NDP since the 1960s.

With the exception of Mills' time in office, the chart at the top of this post shows how the New Democrats have been remarkably steady in the riding since 1965. Between that election and 1988, the NDP always took between 36% and 46% of the vote, a tradition Layton continued until last year's spike. The chart also demonstrates that the Liberals have been on an almost constant decline since 1993, while the Conservatives have not been a factor since 1984 - though it is interesting to see how dominant they were before the election of D.G. Hahn in 1963.

Though the riding's boundaries have changed since 1867, there is a common geography for Toronto East, Broadview, Broadview--Greenwood, and Toronto--Danforth. There is also a common link of MPs, making Toronto East the ancestor of the riding that will soon by contested in a by-election. The successor of James Beaty, quite fittingly a "hero of the working class", was Jack Layton until 2011. It seems quite likely that Craig Scott will soon be the successor of Beaty and Layton. UPDATE (20/03/12): And he was.
Posted by Éric at 9:22:00 AM