Hudak back on top

It has been little more than three months since the last vote was held in Ontario, but already the pendulum has swung back in Tim Hudak’s favour. The good news for Premier Dalton McGuinty, however, is that Hudak has squandered an advantage before.

The article gives the poll a little context and looks at the stakes in the Ontario minority legislature. But let's look at the actual results of the poll. 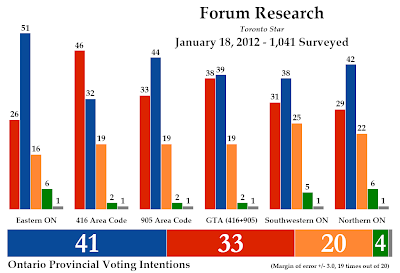 If Forum wasn't releasing a poll-a-week, I'm not quite sure what we'd all do. But Ontario is in a minority situation, so it is probably a good idea to keep tabs on what's going on in the province.

This is the second poll to be released since the vote was held on October 6, the other having been put out in November by Innovative Research and finding that Ontarians had not yet changed their minds.

This poll, however, shows a big shift in support as the Progressive Conservatives stand at 41%, six points above their election result. The Liberals have fallen five points to 33%, while the NDP is down three points to 20%.

I don't have a model prepared yet for the next Ontario election, but this would likely result in a PC majority and a loss of seats for both the Liberals and the New Democrats.

The Liberals are only leading in the 416 region of Toronto, the core of the city (44%), while the New Democrats look weak in every part of the province. Most dangerously for them, they are behind both the Liberals and the Progressive Conservatives in northern Ontario.

Almost everyone in Ontario has an opinion on Dalton McGuinty, with only 11% unsure of whether they approve or disapprove of his performance. That contrasts quite a bit with Hudak (26% don't know) and Horwath (32%).

As I mention in the article, Tim Hudak has led the Liberals by wide margins before only to fall behind. At 41%, his party is at its highest level of support since the beginning of the last election campaign, while the Liberals hit 33% several times prior to the vote. In other words, this poll could have been pulled out of early September, suggesting that there's little that could be taken to the bank if the Tories somehow managed to force another election. I wouldn't bet against McGuinty if the campaign started today.
Posted by Éric at 9:04:00 AM