With a steep drop in support among francophones, the New Democrats are now only one or two points ahead of their main rivals in Quebec, where more than half of the NDP’s 101 MPs were elected in May 2011.

Two recent surveys, one by Nanos Research for CTV and The Globe and Mail and the other by Léger Marketing for Le Devoir and the Montreal Gazette, indicate the New Democrats continue to bleed support in the battleground province.

The article focuses on the results of the Nanos and Léger surveys in Quebec. But let's here take a closer look at the Léger poll as well as Nanos's national results. 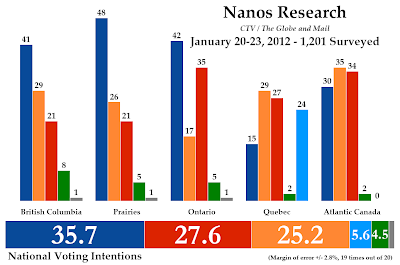 Nanos Research was last in the field December 15-18, and since then the Conservatives have dropped 0.8 points to 35.7%. They are trailed not by the NDP, however, but instead by the Liberals, who are up two points to 27.6%.

The New Democrats trail in third with 25.2%, down 3.5 points since Nanos's last poll.

Nanos is the polling firm that records Liberal support higher than any other at the moment, while also showing NDP support to be lower than other surveys. It certainly makes it stand out from the others, particularly in terms of its strong Liberal showing in Quebec and its weak NDP number in Ontario.

But there have been two polls recently that pegged Liberal support at 25%, while more have put the NDP at 28%. This does not make Nanos too different, though it does put it on the optimistic side of Liberal support.

Quebec is the most interesting result, and in fact is not too different from the Léger poll below. The New Democrats are down 4.4 points to 29%, while the Liberals are up 3.6 points to 26.5%. The Bloc Québécois is up 4.2 points to 24.1%, while the Conservatives are down 5.7 points to 15.1%. This is not the first poll to show the NDP down to this level of support, and corroborates the slip that Léger has also recorded since mid-December (as well as the Liberal gain).

Elsewhere, the Conservatives have gained 6.6 points in British Columbia and lead with 41%, while they have dropped 6.4 points in the Prairies (including Alberta) to 48.1%. They are also down 12.1 points in Atlantic Canada to 29.5%. 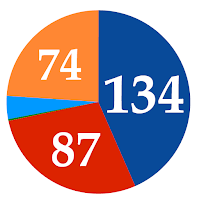 With the current 308-seat electoral map, the Conservatives win 134 seats with the results of this poll. The Liberals win 80 and the New Democrats win 66, while the Greens take one and the Bloc takes 12.

The Conservatives win 20 seats in British Columbia, 24 in Alberta, 16 in the Prairies, 56 in Ontario, eight in Quebec, nine in Atlantic Canada, and one in the north.

The Liberals win four seats in British Columbia, two in Alberta, five in the Prairies, 37 in Ontario, 22 in Quebec, 16 in Atlantic Canada, and one in the north.

The New Democrats win 11 seats in British Columbia, two in Alberta, seven in the Prairies, 13 in Ontario, 33 in Quebec, seven in Atlantic Canada, and one in the north.

This would still give the Liberals and the NDP a combined majority of seats, but would place the NDP in a junior position. And while 29% and 33 seats is not great for the NDP in Quebec compared to their election result (though stellar compared to where they were a year ago), it could be worse. 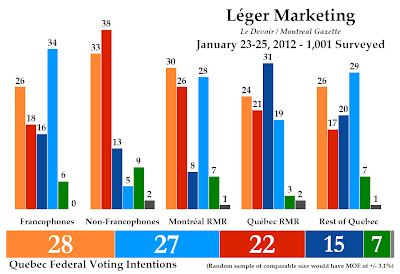 Léger was last in the field December 13-14, and since then the NDP has dropped five points to 28% in Quebec, a very similar result and trend to what was identified in the Nanos poll.

The Bloc Québécois has picked up one point to close to within one of the NDP, and stands at 27%. The Liberals are up five points to 22%, while the Conservatives are down three to 15%.

Those are not dissimilar results to Nanos. It gives us a range of 28-29% for the NDP, 24-27% for the Bloc, 22-27% for the Liberals, and 15% for the Conservatives. That is relatively tight, but compared to other surveys conducted in January it is on the higher end for both the Liberals and the Bloc, and the lower end for the NDP. Nevertheless, Léger and Nanos have the most up-to-date data available.

The Bloc is up two among francophones, in Montreal, and in the rest of Quebec. They are down six in Quebec City, however.

The Tories have slipped two points among francophones and in Quebec City and five points in Montreal and among non-francophones.

These numbers would result in 27 seats for the Bloc Québécois, 25 for the New Democrats, 15 for the Liberals, and eight for the Conservatives.

Those are very problematic numbers for the NDP. Grafted on to today's parliament, it would reduce the NDP to only 68 seats in the House of Commons (the Liberals would increase to 42, the Conservatives to 169).

Being in the lead is still a good thing for the NDP, but they are in a very delicate position. By the time the next leader is chosen, he or she may take over a party in second or third place in Quebec unless things are turned around. The one advantage the NDP does have in this case, however, appears to be that neither the Liberals nor the Bloc are making their gains by anything but default. Neither party has really done anything to warrant a big increase in support.

The party can try to dismiss the polls considering the next election is still more than three years away, but during the years of the Bloc's dominance in Quebec a drop in support of this size would have been a major story. Much of the support the NDP gained in Quebec in the last election is relatively soft - it has to be, considering how quickly it turned from the other parties to the NDP. Waving away the results of these polls does not take anything away from what appears to be discontent among Quebecers with how the NDP has handled their new role in the province. The NDP ignores this discontent at their own peril.
Posted by Éric at 9:19:00 AM