Entering the New Year, the Conservatives continue to hold a solid lead over their rivals on the opposition benches. But 2011’s two big winners have taken a step backwards as 2012 begins, permitting the Liberals to move forward with gains in Canada’s two largest provinces.

An aggregation of every public opinion poll released since the May 2 election, heavily weighted toward the most recent data, indicates the Conservatives have the support of 36 per cent of Canadians, down 3.6 points since the election and 2.2 points since Nov. 2, 2011.

You can read the rest of the article, detailing my latest federal vote and seat projections, at The Globe and Mail website here.

Before getting to this week's update of the NDP endorsement rankings, let's take a deeper look at the projection featured in this article.

Using the widest margin required to have given the proper seat ranges to the parties in the last Ontario election, which featured ridings of similar size to that at the federal level, I calculated what the seat ranges are for this projection as well.

Of course, winning as few as 109 seats or as many as 187 is very unlikely. The most likely outcome is 140 seats or close to it.

The New Democrats could win as few as 56 seats or as many as 128, meaning that they could potentially win more seats than the Conservatives.

The Liberals could win as few as 29 seats and as many as 88. At their current levels of support it does not appear that the Liberals could do much worse than their 34-seat performance in May 2011. They could, theoretically at least, surpass the NDP.

The Bloc Québécois seat range stands at between one and 27 seats, while the Greens could win one or two.

In addition to calculating the range, I also recorded what kind of races current levels of support would yield.

Of the 140 seats projected to be won by the Conservatives, 31 are considered close enough races that the projection could make the wrong calls. Interestingly, however, they are spread relatively evenly between the New Democrats (17) and the Liberals (14). But of the 47 ridings in which the Conservatives are trailing by a close margin, 28 of them are Liberal, 16 are NDP, and three are projected to be won by the Bloc Québécois.

It is a very different situation for the New Democrats. In the 43 seats in which they lead by close margins, in 19 of them they are being chased by the Bloc. In another 15 they are trailed by the Conservatives and in nine the Liberals are not far behind. This means that a defensive campaign would mostly be fought in Quebec, primarily against the Bloc, but that the NDP would also need to fend off the Tories and the Liberals.

Now to the updates to the NDP endorsement rankings. This past week being a holiday week, there isn't much to report. But there have been a few minor changes.

Paul Dewar is the only candidate with a new endorsement that can be recorded in the rankings: Mable Elmore, an MLA from British Columbia. That gives Dewar an extra point, bumping him up to 26.9, or 5.7% of the total available points (a gain of 0.2 percentage points). Dewar has said he will have more endorsements to announce in the new year, so we should expect him to get another boost soon.

The endorsement of Thomas Mulcair by Herb Dickieson, former leader of the PEI New Democrats, was not added to the rankings last week but should have been. Dickieson gives Mulcair an extra 0.5 points, meaning he now stands at 119.8 points, or 25.5% (unchanged). The margin between Mulcair and Brian Topp now stands at 67.2 points.

That is partly because Topp has dropped one point as I have removed the endorsement of Joy MacPhail, former BC MLA. As a former MLA and interim leader, she was not supposed to be included in the rankings to begin with. This means Topp is now down to 187 points, or 39.9% (-0.2).

Because of the gains by Mulcair and Dewar, Peggy Nash's share of all endorsement points has dropped by 0.1% to 20.3%. 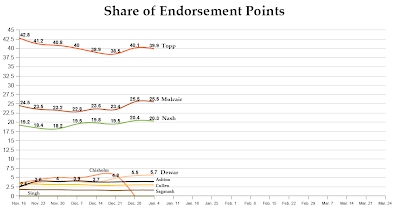 So, a relatively quiet week. But whatever momentum there is appears to be in the corners of Mulcair and Dewar. Since December 14, Mulcair has made a 2.1-point gain in the points share while Dewar has gained two points. But, as he was starting from a lower share, that is a much more significant increase for Dewar.

The press has also been much more positive for Mulcair, Dewar, and Nash than it has been for Topp. Virtually every report says he is no longer the front-runner, though that seems to be based primarily on anecdotal evidence, gut-feeling, and reports from people within the party (always to be taken with a grain of salt, since a leadership race splits a party into various camps, no matter how amicable they may be).

The next round of debates should shake things up and provide a clearer picture of the race. It might not have the drama of last night's Iowa Republican caucus, but the NDP leadership campaign should still have some surprises in store.
Posted by Éric at 10:16:00 AM