The rise of the B.C. Conservatives?

Just before Christmas, two polls were released concerning the provincial situation in British Columbia. One is problematic, and I'll get to that later, but the other shows that the B.C. Liberals and the B.C. Conservatives are tied, well behind the B.C. New Democrats. 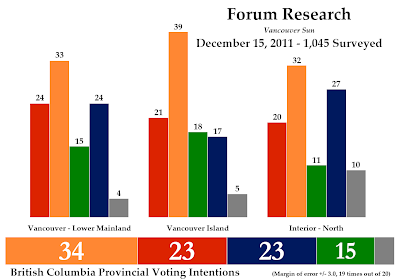 This is the first Forum Research poll for British Columbia that I've recorded. It shows the New Democrats ahead with 34%, well below were some of the other polls have situated the NDP. Nevertheless, they have a healthy 11-point lead.

The Liberals and the Conservatives are tied with 23% apiece, a horrible result for Christy Clark but a wonderful one for John Cummins. The Conservatives have not done better than 18% in any poll, but considering that the party has been put in the mid-teens recently it is not unusual to have them so high in this survey.

Oraclepoll had the Liberals at 25% at the end of November, so for Forum to have them so low is also not unlikely. Forum and Oraclepoll are also on the same page when it comes to the Greens.

But one problem we've seen lately in Forum's polls is that the "Other" results are unrealistic. The Alberta poll from December had the Others at 9%. Here it is a more reasonable 5%, but that is still at least three points too high. We've seen these kinds of results in other IVR polls. Perhaps it would be best for firms using the IVR method not to give respondents the "Other" option. 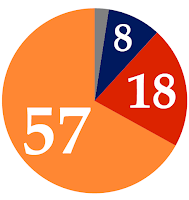 A complete model for British Columbia is not yet ready, but a simple model gives the New Democrats a majority government with these numbers. They win 57 seats, with the B.C. Liberals taking 18 and the Conservatives winning eight. Two independents are also elected.

It should come as no surprise that the NDP would win by such a large margin against a divided electorate. How the Liberal and Conservative vote will fall, however, is a little trickier. If they have some good candidates they should be electable at this level of support, but I imagine with less of a profile and being a completely new party, they will have some difficulty getting enough support to defeat sitting MLAs in individual ridings.

The other poll released just before Christmas was by the NRG Research Group, a polling firm of which I am unfamiliar. I have a real problem with this poll.

NRG decided to leave the Greens off the survey because the party has opted not to run in by-elections. This, they say, gives a "realistic scenario of the political situation at this time." That is ridiculous. Unless NRG is only polling in ridings where by-elections are scheduled, leaving the Greens off the survey completely (there is no "Other" option in this IVR survey, though they combined "None of the Above" with undecideds) distorts the political situation entirely. When the next provincial election rolls around the Greens will be presenting candidates. Just because they have decided not to contest by-elections does not mean they are no longer a viable party or that anywhere from 5% to 15% of British Columbians intend to vote for them. It boggles the mind.

The results that the poll did yield were 36% for the New Democrats, 32% for the Liberals, 19% for the Conservatives, and 13% "NotA/Undecided", though the preamble in the report only calls that 13% undecided. Transforming that 13% into the Green vote is far too much of a leap for my taste, making this an incomplete survey and one that I wouldn't include in my projection model if it were currently running.

NRG has the NDP leading on Vancouver Island and the North Coast, as well as in the Interior. The Liberals lead in the Lower Mainland, while Conservative support is generally uniform.

But what Forum and, to some extent, this NRG poll suggest is that the B.C. New Democrats have a solid lead going into the last (and only) full year of Christy Clark's Liberal government. It also suggests that the B.C. Conservatives will be an important factor when the next election is held in 2013. One wonders whether Cummins will be handing the NDP a victory by splitting the right-of-centre vote. Perhaps that is too simplistic a view - if the Conservatives were not on the scene would the anti-Liberal vote coalesce around the NDP anyway?

What we know for sure is that the next election in British Columbia should be an interesting one. The last round of provincial elections were relatively ho-hum, but with Alberta, Quebec, and British Columbia on the docket in the next 18 months things are looking up.
Posted by Éric at 9:53:00 AM