What happened to the Liberals in Quebec?

As Liberals from across the country gather in Ottawa today for the start of their biennial convention, one question on almost everyone’s lips is whether Bob Rae will eventually turn his interim position as leader into a permanent one.

Few Liberals deny that Rae has done a good job or that, if he chooses to run in the leadership race scheduled to come to a conclusion in early 2013, he would be a good candidate to lead the party into the next election. That he is the best person for the job, however, is far from a consensus opinion.

But more than eight months after the Liberals were handed a drubbing in the last federal election, Bob Rae has undoubtedly kept the Liberal Party’s head above water. Eight months down, 46 more to go.

A new poll conducted by CROP for L'Actualité was released yesterday, investigating what Quebecers think have been the causes of the poor performances of the Liberal Party in recent elections. The results are interesting. 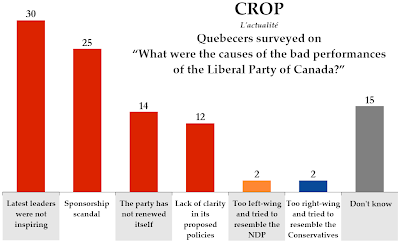 The most common answer is the one that Liberals themselves seem to have identified as their major problem in the past. Almost one-third, or 30% of Quebecers, said that the main reason for the Liberal decline was that their leaders have not been inspiring.

For party members looking for that next messiah, this would seem to back them up.

But it isn't as simple as that. Another 25% of Quebecers blamed the sponsorship scandal, which is now getting a little long in the tooth. Undoubtedly, these Quebecers know their history - it absolutely was the sponsorship scandal that sent the Liberals on their long trip south in the province. Whether that is still the problem, however, is more difficult to say. The scandal tarnished the Liberal brand in Quebec, and while the scandal itself may not be the reason today that Quebecers are not supporting the Liberals in large numbers, its effects appear to still be haunting the party.

This convention taking place over the next three days is about re-building and renewal, and that is what 14% of Quebecers said the Liberals have not managed to do. Another 12% blamed a lack of clarity the Liberals have had in their proposed policies.

A last tranche of 15% said they did not know, an opinion that is probably shared by many members at the convention this weekend.

And a decline it certainly has been - but not just since the days of the Gomery Inquiry. Liberal support has waxed and waned since then. The Liberals averaged 17% support in Quebec in December. While that was their best result since April 2011, it is still half of where they were in May 2009. In that month, the Liberals averaged 34% support in Quebec and were nipping at the Bloc's heels. In December, the Liberals were fourth in support in the province behind the NDP, Bloc, and Tories, a position they have owned for the last eight months.
Posted by Éric at 9:30:00 AM