Last week, EKOS released a series of poll results for iPolitics that were drawn from a survey conducted online in mid-December. Unfortunately, that makes these results slightly out of date but we can still take a look at them. I invite you to take a look as well at all of the other information contained in the expansive EKOS report, as it touches on much more than voting intentions. 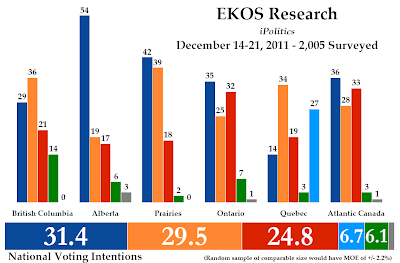 This is the first publicly released report of federal vote intentions from EKOS since the May 2011 election, and the poll shows a much closer race between the Conservatives and the New Democrats than we've seen elsewhere.

The Conservatives finished with 31.4% support in this survey, compared to 29.5% for the New Democrats and 24.8% for the Liberals.

But EKOS also filtered these numbers out according to who voted in the May 2011 election, weighing them accordingly. With those weightings, EKOS pegs Conservative support at 36.7%, with the NDP at 27.8% and the Liberals at 21.9%.

That is quite a big difference between the voting intentions of the general population and the voting population. It does not surprise me that there would be a disparity, though this is larger than I would have expected. This EKOS poll was taken at the same time as a Nanos poll (December 15-18), and EKOS's likely voter numbers are similar to what Nanos had found, though I believe Nanos reports the voting intentions of all eligible voters. Nevertheless, that Conservative support among actual voters would be far higher than it is among eligible voters jives with what we have seen in recent election results.

EKOS's main divergence from other surveys seems to be in British Columbia, where EKOS has the NDP leading with 35.9% to 29.1% for the Conservatives and 21.1% for the Liberals. Considering sample size, however, this is not problematic.

The poll confirms what we've seen in some other surveys taken at the end of 2011, notably that the race in Ontario is far closer than it was on election night, with the Conservatives at 34.6% to the Liberals' 31.9%. It also shows that the NDP has dropped in Quebec (34.4% to 27.4% for the Bloc) and that the Prairies are looking to be a real battlefield. In this poll, the margin between the Conservatives and New Democrats is tiny (42% to 38.7%). 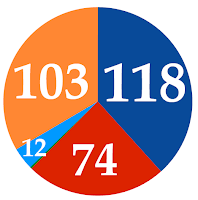 Primarily because of the results in British Columbia and the Prairies, but also the close race in Ontario, these numbers would result in a small Conservative plurality of 118 seats. The New Democrats would take 103 and the Liberals 74, with 12 going to the Bloc Québécois and one to the Greens. If they could co-operate, the Liberals and NDP would be able to govern with a stronger majority than the Conservatives currently enjoy.

The Tories would take 12 seats in British Columbia, 26 in Alberta, 13 in the Prairies, 48 in Ontario, five in Quebec, 13 in Atlantic Canada, and one in the north with these numbers. In a 338-seat House of Commons, they would likely win 133 seats.

The New Democrats win 17 seats in British Columbia, one in Alberta, 10 in the Prairies, 23 in Ontario, 46 in Quebec, five in Atlantic Canada, and one in the north. In the expanded Commons, they would likely win 111 seats.

The Liberals win six seats in British Columbia, one in Alberta, five in the Prairies, 35 in Ontario, 12 in Quebec, 14 in Atlantic Canada, and one in the north. With the extra seats in the House, the Liberals would likely win 80 in total.

The EKOS results for the more likely voters would probably result in a much stronger Conservative minority, with the Liberals and Bloc Québécois making most of the gains at the expense of the Tories and NDP.

These are interesting results, and at the very least add another set of data showing that Conservative support has slipped since the election and that the NDP's support in Quebec is wobbly, though still enough to give them a majority of seats in the province. This may seem like an irrelevant point considering that the next election is more than three years away, but I'd counter that knowing how Canadians feel about the people and parties who govern them is worth knowing. And if the Conservatives increased their support to 60% or if they dropped to 10%, that would be a significant piece of information - even if it wouldn't change the make-up of our government for several years.

Note: The monthly federal polling averages chart has been updated to include this December 2011 EKOS poll.
Posted by Éric at 8:58:00 AM