Forum Research and The National Post released a new NDP leadership poll last night, indicating that Thomas Mulcair remains the favourite of both Canadians and NDP supporters. But what does it mean? 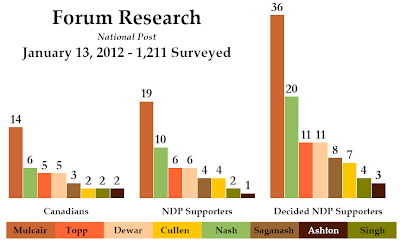 Once again, the sample size of NDP supporters, particularly of decided NDP supporters, is very small. The small size of the sample gives the poll a relatively large margin of error, making it difficult to discern any trends since Forum last reported.

But among decided NDP supporters (which, I should emphasize, do not necessarily share the opinions of the NDP members who will actually choose the next leader), Thomas Mulcair leads with 36% support, down nine points since Forum's December survey.

Peggy Nash follows with 20%, up four points, while Brian Topp and Paul Dewar are tied for third with 11%. At the very least, this survey seems to confirm the perceived frontrunners. Whether that has more to do with name recognition than anything real, however, is impossible to say.

If we include the undecideds, however, which number 48% of NDP supporters, we get Mulcair at 19%, Nash at 10%, Topp and Dewar at 6%, Saganash and Cullen at 4%, Singh at 2%, and Ashton at 1%. It is noteworthy that among this group of NDP supporters, Mulcair is falling while Nash, Topp, and (especially) Dewar have made gains.

Among all Canadians, Thomas Mulcair is the preferred choice at 14%, followed by Peggy Nash at 6% and Brian Topp and Paul Dewar at 5%. Fully 62% have no opinion.

It may be a knock against him, but Thomas Mulcair is also the preferred choice of Conservatives (11%), Liberals (13%), and Bloc supporters (33%). That may also be an indication that he has the best chance of winning new support.

What this indicates is that, with the exception of Saganash and Singh, the native region of each candidate is the region where they have the most support. This might also be the case on the convention floor (virtual or otherwise), but it might also be caused by name recognition.

But what do these levels of support mean in the context of the NDP's leadership race? Mulcair's numbers are undoubtedly inflated due to his lead in Quebec, which at last count contains only 6% of the party's membership.

If we weigh the results of this poll by the proportion of members each region contains (based on the numbers the party last released), we get a much closer result:

This is also a quite plausible result. Mulcair's strength is diminished as Quebec gives him less real votes than either Ontario or the Prairies, and just as many as he earns in British Columbia. Topp, on the other hand, builds his support on the four western provinces, where he receives almost four-fifths of his votes. Peggy Nash is strongest in Ontario, as is Dewar, while Cullen banks on British Columbia and Ashton on the Prairies. Saganash's numbers are perhaps exaggerated by his B.C. result.

Whether or not these are the numbers we'll see on March 24, they do reveal the problem with Thomas Mulcair's campaign. He is overwhelmingly the favourite of Quebecers, but they can only give him so many votes. Topp may not be dominating east of Saskatchewan, but he is strong in the provinces that have a lot of members, while Nash and Dewar have a solid base in Ontario.

Based on information published in the media from Brian Topp's campaign, however, there does seem to be an indication that membership numbers in Quebec have ballooned to somewhere closer to 15% of the total membership. If that is truly the case, then Mulcair will have a very good chance of coming out on top, and perhaps by a wide margin, on the first ballot.

Where he'll end up on the second and subsequent ballots, however, is the real question. The other three frontrunners seem to have a higher chance of earning second ballot support, particularly Paul Dewar and Peggy Nash.

Mulcair's campaign is centred on expanding the NDP's support beyond its traditional base. He may also be expanding the NDP's membership in that way as well. But he'll still need more than 50% of the votes on March 24, and that means getting support from the rank-and-file members who were there long before Mulcair was even an MP.
Posted by Éric at 11:18:00 AM