This week's NDP endorsement rankings update has all four of the frontrunners on the move, but only Paul Dewar has made a gain in his share of the points with the endorsement of a large national union and a veteran MP. 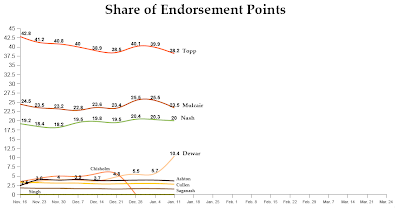 Dewar's most important endorsement this week comes from the National President of the National Union of Public and General Employees, James Clancy. The union has a membership of 340,000 people, making it one of the largest in the country. That alone nets Dewar 20.4 points.

Another endorsement, presumably to be announced tomorrow, comes from Linda Duncan, the MP for Edmonton-Strathcona. Having been elected twice by the people of the riding, Duncan adds five points to Dewar's total.

If this endorsement does occur as expected, this will be a big one for Dewar. Unlike his other main rivals, Dewar has not had much support from the NDP caucus. Duncan will become the first sitting MP to endorse Paul Dewar for leadership. And as Duncan is the only MP for Alberta, this gives Dewar an edge on the more than 8,000 NDP members that were last reported to be in the province.

These two endorsements give Dewar a boost of 25.4 points, increasing his total to 52.3 points or 10.4% of all available endorsement points. That is a gain of 4.7 percentage points since last week, and puts him in the double digits. He is now 48.1 points and 9.6 percentage points behind Peggy Nash.

Nash has landed two endorsements of her own, one from Mike Sullivan, the rookie MP for York South-Weston, and another from Dany Morin, freshman MP for Chicoutimi-Le Fjord. This gives her an extra five points and increases her caucus support to six MPs, not including herself.

With these endorsements, Nash now stands at 100.4 points, or 20% of the total. That is, however, a 0.3-point loss since last week, owing to the major gain that Paul Dewar made.

With Calvert's support, Topp now has 192 endorsement points or 38.2% of the total available. That is a drop of 1.7 percentage points since last week, again because of Dewar's gains, but Topp remains in the lead by a wide margin.

Thomas Mulcair has had a bit of a mixed week. The good news is that he received the support of BC MLA Leonard Krog, awarding one point to Mulcair's campaign. The bad news is that Lise St-Denis, the MP for Saint-Maurice-Champlain who endorsed Mulcair for leadership, has jumped ship to the Liberals. This means Mulcair has lost 2.5 points in the endorsement rankings, and has gained the stigma of having once had the support of someone who is now persona non grata in the NDP.

Mulcair has thus had a net loss of 1.5 points this week, dropping him to 118.3 points or 23.5% of all available points. That is a two percentage point drop since last week.

Niki Ashton (0.2%), Nathan Cullen (0.2%), and Roméo Saganash (0.1%) have all dropped slightly in their share of endorsement points as more have been added to the pile. None have landed new endorsements in some time. Martin Singh remains mired with zero endorsements.

With Paul Dewar now in the double digits and finally having some caucus support, he has a real, verifiable claim to being within the top tier. I'm not quite sure that Brian Topp is having as much trouble as some seem to think, as he continues to gain the support of important figures within the NDP. Perhaps the membership will revolt against this decision from on high, but with many debates still to come there is plenty of time for Topp to demonstrate that he belongs among the top contenders. Paul Dewar and Peggy Nash will also have quite a bit riding on the debates, as they need to show how they might look in the inevitable sparring matches against Stephen Harper.
Posted by Éric at 8:56:00 AM