The Toronto Star released the results of a new Forum poll yesterday, indicating that the Liberals have made gains since December. But it isn't as simple as that. 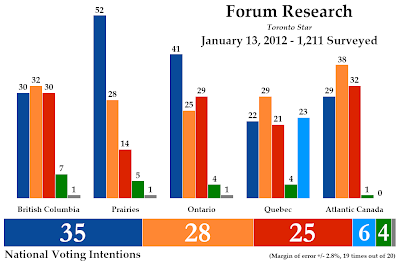 The poll found that the Conservatives have gained two points since Forum's last poll conducted on December 13. They now lead with 35%.

The New Democrats are up one point to 28%, while the Liberals are up four points to 25%.

Why? In December, the Forum poll pegged Green support at 8% and support for other parties at 5%. Both numbers were a little high, but particularly the result for the Others. They have since dropped to more plausible levels of support, with the Greens at 4% and the Others at only 1%. Because of this, eight points were made available and everyone got a piece of the pie. Whether that is an indication of actual real growth by the Liberals (and the Conservatives, and the NDP) or not is a little fuzzy.

As Forum did not release any federal voting intentions before their December poll, we can't say very much about where the parties are heading.

To find out what this poll suggests about what Canadians think about the party leaders, however, you can read my latest article on The Huffington Post Canada website here.

One odd thing stood out when looking at the cross tabs of this poll: the Conservatives held an important lead (39% to 29% NDP) in the 18 to 34 age group. That seems a little unlikely, just as it seems unlikely that the New Democrats would lead (33% to 32% Conservatives) in the 35 to 44 age group.

The Conservatives have made a big gain in Ontario, picking up eight points since Forum's December poll to hit 41%. The Liberals (29%) and New Democrats (25%) are each up two points, largely because of the four point drop in support for the Others and the eight point drop in Green support. Again, it is difficult to discern any real meaning in this - it appears that this is more of a "reset" poll from some quirky results last time around.

It is the same situation in Quebec, where the "Others" has dropped from 8% to a much more plausible 1%. Accordingly, the gains have gone to everyone: four points for the Conservatives (22%), two points for the Liberals (21%), and a point apiece for the New Democrats (29%) and the Bloc Québécois (23%). Those results all generally line-up with what other firms have recorded, but Forum is seeing a much more bunched up situation in Quebec. Having four parties between 20% and 30% support is about as close as it gets.

The main reason for the Liberal gain, however, is British Columbia. Unlike some of the other provinces, this can't be blamed on a big change in support for "others". Instead, the Conservatives have dropped nine points to reach 30% and the NDP has dropped seven points to hit 32%, giving the Liberals an extra 17 points to put them at 30% support. But considering what we've seen from other surveys, I'd have to call this one a bit of an outlier until we see some corroborating results.

Elsewhere, the Conservatives have gained one point in the Prairies (including Alberta) and lead with 52%, but the NDP is not too far behind with 28%, a gain of five points. And in Atlantic Canada, the NDP is up eight points to 38%, the Liberals are up five to 32%, and the Conservatives are down three to 29%. 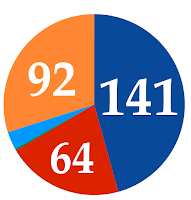 With these numbers and using the current 308-seat electoral map, the Conservatives win 141 seats and are reduced to a minority government. The New Democrats win 92 seats and the Liberals win 64 seats, while 10 go to the Bloc Québécois and one to the Greens (guess who!).

The Conservatives win 11 seats in British Columbia, 26 in Alberta, 18 in the Prairies, 63 in Ontario, 14 in Quebec, eight in Atlantic Canada, and one in the north. Whereas the western caucus (including the Conservatives' two northern MPs) is currently larger than the Ontario caucus, in this scenario the Ontario caucus would be larger. The party moves east?

The New Democrats win 14 seats in British Columbia, two in Alberta, eight in the Prairies, 22 in Ontario, 36 in Quebec, nine in Atlantic Canada, and one in the north.

The Liberals win 10 seats in British Columbia, two in the Prairies, 21 in Ontario, 15 in Quebec, 15 in Atlantic Canada, and one in the north.

It will be worth watching British Columbia to see if there is anything really going on with the Liberals, and Quebec remains very fluid. But this poll generally jives with what others have shown recently and continues to show the two main changes since the May 2011 election: the New Democrats are slipping in Quebec and the Conservatives are no longer in a majority position.
Posted by Éric at 9:14:00 AM