It is safe to say that we can call this past week one of the most interesting so far of the NDP leadership campaign. In addition to some caucus support being handed out to three of the candidates last week, there was the withdrawal of Roméo Saganash from the race, a debate in Quebec City, and a flurry of polls from the campaigns of Paul Dewar and Thomas Mulcair, followed by a war of words.

I'll take a look at the two polls later, but first let's get to this week's endorsement rankings update. UPDATE: This post has been edited since the version posted this morning. It neglected to include the endorsement of Pierre Dionne Labelle. 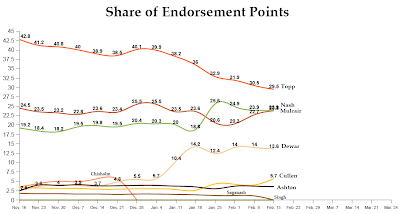 Endorsements recorded this past week came exclusively from NDP MPs, and Nathan Cullen made arguably the most important splash by getting the support of five-term MP Brian Masse from Windsor West.

Though Nathan Cullen's fundraising and, now, poll numbers have been surprisingly good, his support within the party establishment has been quite thin. All of it had come from British Columbia, but with Masse's support Cullen has broadened his base of endorsers outside of his home province. It also gives Cullen another experienced supporter. His three caucus supporters have won a combined total of 10 elections.

Thomas Mulcair also expanded his caucus support with the endorsements of Denis Blanchette (Louis-Hébert), Ruth Ellen Brosseau (Berthier-Maskinongé), and two-term Sudbury MP Glenn Thibeault. He also received the support of Pierre Dionne Labelle, the MP from Rivière-du-Nord who had previously endorsed Roméo Saganash. This now puts his publicly declared caucus support at 40 MPs, or more than two out of every five NDP MPs not vying for the party leadership. 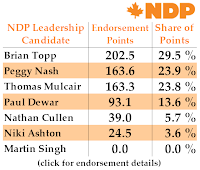 In terms of the endorsement rankings, Brian Topp is still first but he has dropped a percentage point to 29.5%. This is the first time his establishment support has dropped below the 30% mark.

Nathan Cullen makes the largest gain in point share with a 1.7-point boost to 5.7%, his highest of the campaign so far. Niki Ashton drops 0.1 point to 3.6% while Martin Singh remains at zero. Roméo Saganash had 1.1% of endorsement points before his withdrawal.

The endorsement rankings do not line up with the two polls released by the Paul Dewar and Thomas Mulcair campaigns, they though do identify the five frontrunners correctly, put Peggy Nash in second, and Paul Dewar about where the polls have him. But the endorsement rankings aren't meant as a predictor, rather they are more of another way to gauge the race. It may end up being much closer to the results once the campaign is over and all the endorsements have been made, however. 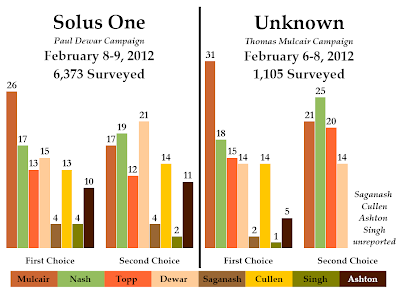 The poll from the Paul Dewar campaign on Monday quickly got people's attention, and perhaps deflected attention away from Dewar's relatively poor performance at the French-language debate on Sunday in Quebec City.

I watched the debate and felt that of the seven candidates only Paul Dewar and Martin Singh seemed to be in great difficulty when not relying on their notes. While Nathan Cullen's French is also rough, he speaks it with confidence and at the very least would be capable of keeping up with Stephen Harper in a French-language debate. Peggy Nash and Niki Ashton's French was quite good, while Topp is fluent. Mulcair is still, by far, the most comfortable in both the debate setting and in the language.

The Dewar poll is a large poll conducted by Solus One, a call centre, but taken just before Saganash's withdrawal and the Quebec City debate. It shows Thomas Mulcair in front with 25.5%, followed by Peggy Nash (16.8%) and Paul Dewar (15.1%). Nathan Cullen comes up fourth, surprisingly, with 12.8%, while Brian Topp took 12.7% support.

The Topp campaign disputed these figures immediately. But Thomas Mulcair's campaign then came forward with their own poll, conducted a few days before Dewar's and using a smaller (but still respectable) sample. Mulcair's poll found that he was leading with 31.1%, followed by Nash (17.5%), Topp (14.8%), Cullen (14.2%), and Dewar (13.8%).

Those first ballot results are actually quite tightly grouped with the findings of Dewar's poll. If we round those off, we get Thomas Mulcair at 26%-31% support, Nash at 17%-18%, Dewar at 14%-15%, Topp at 13%-15%, and Cullen at 13%-14%. With the support of the four candidates in the teens not varying by more than two points, it does seem like this could very well be the state of the campaign.

If we average the two polls out, we get:

In other words, no candidate with a chance to win on the first ballot and four candidates bunched up in second. With the margins of error and the weeks that remain in the campaign, the first of the five frontrunners to be dropped off the ballot is anyone's guess. One would imagine that Brian Topp's fundraising would give him the edge in these final weeks, but the NDP's members are certainly the type to be put-off by anything that doesn't smell like grassroots.

With no first ballot winner, that means we go to a second ballot. Here the two polls are not in full agreement. The poll from the Dewar campaign puts their guy in first on the second ballot with 21.2%, followed by Peggy Nash (19.4%), Thomas Mulcair (16.7%), Nathan Cullen (14.4%), and Brian Topp (12.4%). Those are good numbers for Dewar and Nash, good enough for Mulcair, and anemic for Topp.

But the Mulcair campaign finds that Peggy Nash has the strongest second choice support with 25.4%, followed by Mulcair (21.0%), Topp (19.7%), and Dewar (13.7%). Great numbers for Nash, good enough for Mulcair and Topp, and problematic for Dewar. While the Dewar poll indicates that Topp would likely fall off the ballot first, Mulcair's poll points to Dewar being the first to fall by the wayside.

These are far more widely grouped: 19%-25% for Nash, 17%-21% for Mulcair, 14%-21% for Dewar, and 12%-20% for Topp. They do seem to suggest, however, that the top four candidates generally have decent second ballot potential with Peggy Nash being the strongest positioned.

Averaging out the second choice polls (unfortunately the results for Nathan Cullen, Niki Ashton, Roméo Saganash, and Martin Singh were not reported with Mulcair's poll), we get:

This would seem to point to a final ballot of Mulcair and Nash. Cullen would likely not be too far behind Topp. As Mulcair/Cullen and Nash/Topp seem to be the most likely pairings, it means a very close finish between Thomas Mulcair and Peggy Nash. This seems a very plausible outcome.

There are only a few days left before the cut-off for new members to be able to vote in the leadership race, meaning there is little time left for candidates to sign-up dedicated supporters. The campaign now turns to getting down-ballot support and the nod from undecideds and fence-sitters. On the one hand, that means playing nice. On the other, it means the gloves need to come off. It should be an interesting 5 1/2 weeks.
Posted by Éric at 10:07:00 AM